While Ankara has been seeking the extradition of the criminal cult leader Fetullah Gulen, who is currently residing in the US, Turkey has also requested for the government in Germany to return FETO suspects who have sought asylum there. 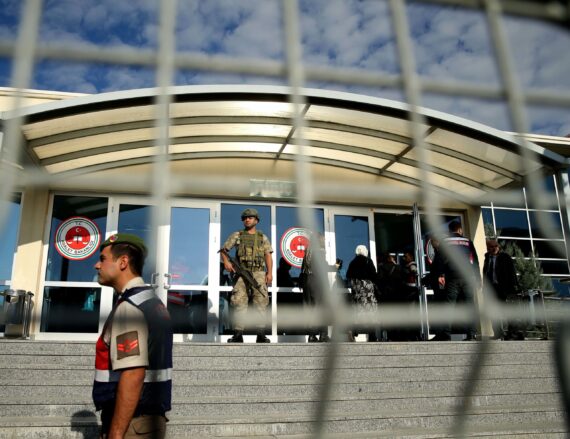 Security forces take security measures around Silivri Penitentiaries Campus during the trial of 143 defendants charged with the events at the July 15 Martyrs’ Bridge, where 34 people were martyred on the July 15 failed coup attempt by the Fetullah Terrorist Organization (FETO), in Istanbul, Turkey on October 9, 2017. Anadolu Agency

While Turkey is fighting against the criminal cult group at home, the group has a concrete diaspora abroad.

In regards to the fugitive members of FETO who are seeking safety abroad, deputy head of the Turkish parliament’s Human Rights Committee stated that they will be left “stateless.”

Speaking to the Anadolu Agency, Fatma Benli stated that “the FETO traitors who think that they are free abroad will be faced with the harsh realities of being left stateless.”

Stressing the importance of Turkey’s fight against FETO, Benli underlined that “Turkey is actually protecting the region and the world from these organizations while fighting the PKK, Daesh, and FETO.”

“The states backing Turkey in this fight are actually providing for their own security.”

In regards to states granting asylum to FETO terrorists, Benli urged for states to stop supporting FETO members in their countries and called on European countries and the US to carry out a joint fight against the terror group.

The deputy also warned that decisions made by some countries to harbor the criminal cult members will come back to bite them: “The states which are backing FETO should see that those who have betrayed their own country will one day betray them.”

While Ankara has been seeking the extradition of the criminal cult leader Fetullah Gulen, who is currently residing in the US, Turkey has also requested for the government in Germany to return FETO suspects who have sought asylum there.

Turkey will not be brought to its knees

Speaking in Ankara, Prime Minister Binali Yildirim also made reference to FETO in his speech.

Yildirim claimed that FETO was trying “new tricks” in order to finish what they failed on July 15.

“Those who could not bring Turkey to its knees during July 15, are now trying to pull another trick.”

“They are saying: ‘How can we finish the job we attempted to do on July 15?’ They think that they can bring our nation to its knees with economic crisis talks, and chaos scenarios.”

The Prime Minister emphasized that “nobody, no power, can hurt this country when our nation has this love for its land and state.”