FETO indictment: Solving the puzzle of the spiderweb

The indictment of FETO's structure outside Turkey, which was conducted by the Chief Prosecutor of Istanbul, provides details of the organization's strategy and the activity of its schools. 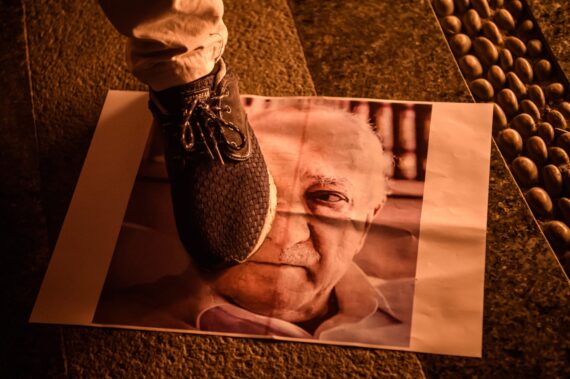 A protestor walks on a poster picturing US-based preacher Fethullah Gulen during a rally at Taksim square in Istanbul on July 18, 2016 following the military failed coup attempt of July 15. Getty Images

The indictment adds that the first expansion of the organization began in Central Asia and with the experience it gained there, the organization has been able to spread its activities to other parts of the world by establishing schools, study and cultural centers, language courses, and various clubs or companies in almost 160 countries.

The organization also tried to convince people with power to send their children to their schools in order to receive ‘sympathy’ and have social, economic, and political influence in any given country.

The strategy of the organization in regards to the role of religion, the indictment remarks, has been ‘flexible’ and tolerant; not imposing Islamic religious practices on people, but rather giving religious messages that are comfortable with the local way of living accepted by the locals. In doing so, the organization aimed to gain the acceptance of the locals and draw new members.

The indictment highlights the fact that Fetullah Gulen moved to the U.S. after Abdullah Ocalan (leader of the PKK) was handed over to Turkey’s intelligence agency.

It is also stated that Gulen has been given references by certain members of the CIA, and with these references his Green Card application was approved and he was given the legal right to reside in the U.S.

According to the indictment, once obtaining his legal status in the U.S., Gulen began his activities with the help of certain CIA members, and focused on the concept of ‘dialogue between religions,’ which is part of his strategy of ‘cover-up’ to declare himself as a religious figure of ‘peace’ and ‘tolerance.’ In his activities, Gulen has been able to establish more than 150 companies and institutions under the umbrella of a federation called ‘Turkish-American Alliances.’

Meanwhile, a delegation from the U.S. will visit Turkey in the upcoming days in order to discuss the ‘new evidences’ of the Turkish authorities on FETO’s role in the 2016 failed coup attempt.