'FETO tried to place itself in the old tutelage regime'

Ending the panel, Burhanettin Duran stated that "A new belief emerged within the Turkish people that people can resist against military coups and that they should do so. In fact, people were making references to Menderes stating that 'we couldn't take care of Menderes [who was hung after a military take over], but we will look after Erdogan.'" 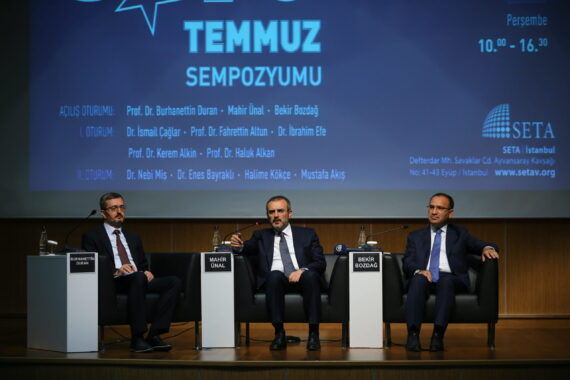 On July 12, 2018, the SETA Foundation in Istanbul organized a symposium about the July 15 coup attempt.

Unal began his speech by stating that “We don’t need to look at literature to observe what happened on July 15 because it occurred during our lifetimes. We just have to analyze the events correctly.”

While the trials of Fetullah Terrorist Organization (FETO) members are still ongoing, Unal underlined that “When the two terms ‘FETO’ and ‘politics’ come together, we have to first assess the mission of Turkish politics.”

“Turkish politics cannot accept another organization or cloud above itself” – and this was something that FETO was trying to do; trying to place itself within a hegemonic space within the Turkish political sphere.

Flaws of the old system

During his speech, Unal emphasized the fact that the July 15 coup attempt cannot be observed without discussing the failures of the old governance system in Turkey.

He made this point by stating that “In 42 years, 36 governments changed.”

Comparing the governance system of Turkey to a car, Unal stated that under the old system there were two drivers – one that was elected by the people and one that assumed its hegemony. He stated that the old system was based on a tutelage regime, where elected officials were continuously blocked by unelected individuals.

Discussing the events that took place on the night of July 15, Unal stated that as soon as the Turkish people felt that the state was being overthrown, they “took to the streets and held on to the state with their bare hands.”

“The Turkish people did not shoot back at the putschists who fired at them. It was as if there was an invisible collective understanding of justice that night.”

Before finishing off his speech, the AK party spokesman underlined the importance of not comparing FETO to other terrorist organizations such as the PKK or Daesh. The reason for this being is because, as Unal stated, “FETO is a group that had infiltrated the state and wanted to take control of the space left free from the old tutelage regime.”

Before beginning his speech, moderator Burhanettin Duran asked for former Justice Minister Bekir Bozdag to talk a little about his experience of July 15, as he is one of the figures that the Turkish people remember in Parliament.

Speaking little of the events that occurred in Parliament that night, Bozdag mentioned that the reason why he believed it was wrong for parliamentarians to hide in shelters (while FETO had dropped 2 bombs on Parliament that night) is because if people had seen that Parliament was shutdown, they would not have found the courage to take to the streets.

Following, Bozdag stated that “In order to understand July 15, we need to go back in time.” Giving reference to previous military coups that happened in Turkey, the former minister stated that “no one ever asked the question: what are you doing?”

There are two events that keep July 15 separate from previous military coups in Turkey. Bozdag listed these as 1) the fact that the putschists could not take hold of the President and 2) that the President chose to protect his and his country’s honor and that the Turkish people stood right behind him. This, Bozdag stated, was a “first for Turkish people.”

One other important feature of July 15 is that “For the first time the justice system did not try to legitimize the coup” – something that occurred during the February 28, 1997, coup during the Erbakan era.

Wrapping up his speech, Bozdag asked the audience to think about one question: “What would have happened if the Turkish people had not answered the President’s call to take on the streets?”

In conclusion, Bozdag made statements appreciating the courage of President Erdogan that night, referring to how he flew to Ataturk Airport with his family, not knowing who was in control. Risking his and his family’s life, Bozdag criticized those that still call Erdogan a “dictator” when he “risked his own life for democracy’s sake.”

Ending the panel, Burhanettin Duran stated that “A new belief emerged within the Turkish people that people can resist against military coups and that they should do so. In fact, people were making references to Menderes stating that ‘we couldn’t take care of Menderes [who was hung after a military take over], but we will look after Erdogan.'”