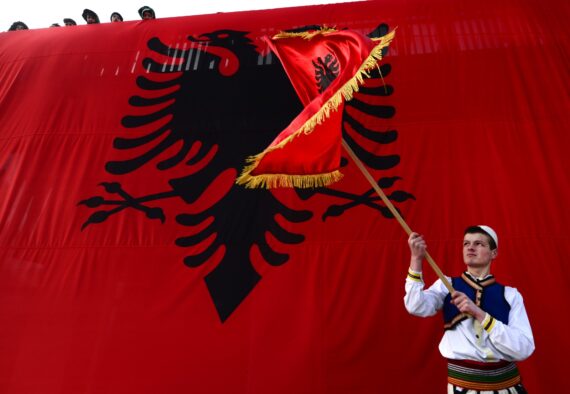 Members of the ethnic Albanian minority in Macedonia with traditional dresses perform traditional dance, as they celebrate the National Albanian Flag Day and the anniversary of Albania's Independence, in Skopje, Macedonia on November 28, 2017. Anadolu Agency

FETO (Fetullah Terror Organization) is a longtime problem for Turkey, whose impact is most obviously seen in its efforts to take over the Turkish military, police, and judiciary apparatuses, by secretly penetrating into them. As a result of this, the organization was able to plot a coup attempt – the bloodiest in Turkey’s history. Fortunately, Turkey did not fall victim to the coup attempt and in the aftermath, the organization faced stiff security measures by Turkish authorities. Nevertheless, members of the organization that fled from Turkey have joined members living across the rest of the world. In this new era, the organization is trying to find new ways of surviving outside Turkey.

I was in Kosovo the week after 6 FETO members were captured by Kosovan security staff and given to the Turkish authorities in the country. The event occurred in late March last year. As I was in the country, I had the opportunity to talk to people living there, mostly locals. What I heard was that FETO members were panicked in Kosovo and were trying to escape somewhere where they could hide from Turkish authorities, sometimes with fake identity documents. As I asked around as to where they could seek shelter, all answers directed me to Albania.

I was in Kosovo the week after 6 FETO members were captured by Kosovan security staff and given to the Turkish authorities in the country. I had the opportunity to talk to people living there, mostly locals. What I heard was that FETO members were panicked in Kosovo.

Albania is a country where the organization has deep reaching roots. I heard that many FETO members were moving to Albania, which they see as a safe haven. Given that the organization has a long history in Albania and an institutional network in their hands, this is not unexpected. Almost one year after having such an experience in Kosovo, this time I visited Albania, where I had the opportunity to converse with academics and journalists.

Albania is well-known for its longstanding relationship with Turkey, dating back to the Ottoman era. The country is famous for being the homeland of countless Ottoman pashas including sadrazams (grand vizier). For this reason, many people both in Turkey and Albania joke that it weren’t the Ottomans that ruled Albania but that the Albanians ruled the Ottoman Empire. Mehmet Akif Ersoy (1873-1936), the author of the Turkish National Anthem, also had Albanian roots. And even today, there are millions of Turkish citizens from Albanian origin living in Turkey. Hence, the country has always caught some level of attention from Turks, and vice versa.

Despite all this mutual attention and interest between the two countries, it was sad for me to observe that Albania’s perception of Turkey has long been mediated by FETO. The terrorist organization reached out to the country right after the collapse of the communist regime. Given that Albania was the most closed communist regime during the Cold War under the rule of Enver Hodja, the country’s meeting with FETO in such a critical juncture (right after its opening), made a significant impact on its future.

Fetullah Gulen terrorist organization still markets itself to the Albanian people as a legitimate Turkish schooling network and exploits the pro-Turkish feelings of unaware Albanian parents, who send their children to these FETO schools

Under the guise of education, the organization built a schooling system in the country way earlier and better compared to the rest of its global operation network. Besides Epoka University and Bedir University, the organization also runs many other schools in the country, ranging from universities to lower degree programs. The tragicomic part of this is that many of these schools use trademark-like names for Turkey. For instance, they are named after significant people such as Zubeyde Hanim (mother of the founder of the Turkish Republic, Mustafa Kemal Ataturk), Mehmet Akif Ersoy, and Turgut Ozal (famous Turkish PM and President, respectively from 1983 to 1989, and from 1989 to his death in 1993). Hence, FETO still markets itself to the Albanian people as a legitimate Turkish schooling network and exploits the pro-Turkish feelings of unaware Albanian parents, who send their children to these FETO schools.

The terrorist organization is also well rooted in the sectors of religious service and health in Albania. However, the most worrying one for me is the schools under their control. The organization is trying to cultivate a whole new generation in Albania under the false pretense of a Turkish schooling network.

Turkey is now providing direct and vivid channels of communication without the FETO interception, and is opening schools in Albania with the Maarif Foundation. Ankara is also pushing hard for the Albanian government to take steps on the situation of these schools and for the extradition of specific FETO members, yet unlike many other countries, the Albanian authorities are yet to respond to these demands. As it stands, Albania seems to be the country where FETO centers its activities in the Balkans. The status of FETO in Albania will be a determinant of future relations with Turkey, which carries a risk of being poisoned by FETO’s operations, and it will also be a determinant for the survival of FETO in the Balkans, where it has nowhere else to go due to the cooperative efforts of other Balkan countries with Turkey.