For German Tourists, Turkey is a Top Destination: An Interview with German and Turkish Travel Agencies

Despite occasional rows between German and Turkish authorities, German tourists have increasingly chosen Turkey as their holiday destination. The New Turkey interviewed Kerstin Heinen, the spokesperson for the German Travel Association (Deutscher ReiseVerband, DRV) and Firuz B. Baglikaya, President of the Association of Turkish Travel Agencies, TURSAB. 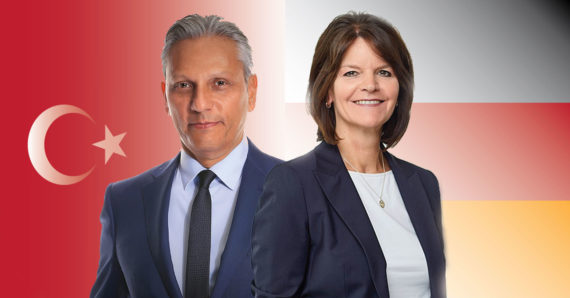 Despite occasional rows between German and Turkish authorities, German tourists have increasingly chosen Turkey as their holiday destination. Selahattin Emre Celebi interviewed Kerstin Heinen, the spokesperson for the German Travel Association (Deutscher ReiseVerband, DRV) and Firuz B. Baglikaya, President of the Association of Turkish Travel Agencies, TURSAB. We directed questions about German tourist potential for Turkey in 2019, why Turkey is among the top three destinations for German tourists and whether the occasional political tensions make an impact on the travel choices of German tourists.

According to the statistical data we have received from the Turkish Ministry of Tourism, the number of tourists visiting Turkey from Germany was almost 3.5 million in 2009. The number reached its peak in 2015 with 5.5 million tourists, but then decreased in the following years to 3.5 million in 2017. Do these numbers reflect any potential? What do you think the number should be? What was the number in 2018 and what is the expected figure in 2019?

Kerstin Heinen: More and more Germans increasingly go on holiday and spend increasingly for their trips – as they did during the past year. They focus to a growing extent on package tours. Travel spending increased last year altogether by 5%; spending on package tours even by 7%. Sales revenues through travel agencies increased and online booking channels continue to gain importance. Spending on vacation and private trips rose to the new record value of EUR 67.9 billion. This amount includes all spending on vacation and private trips from one night onwards, which were booked in Germany prior to starting the journey. If one includes spending on site in the vacation country, Germans spent a total of EUR 95.6 billion on travel last year – a plus of approximately more than 5% versus 2017.

From early November onwards and during the first three months after the turn of the year most Germans book their summer vacation – it is the main booking phase. The core business of the high-street travel agencies and the online travel portals is based on package tours. The first trends concerning the foreign destinations of Germans during their vacation are shown by evaluations of the market researchers of GfK, which the German Travel Association (DRV) presents shortly before ITB Berlin 2019, the world’s most important travel trade fair. The vacation regions with the highest demand in terms of sales revenues for the summer of 2019 are currently (status: late January):

Summer vacation in Turkey is this year again in a particularly high demand: the booking revenues in German travel sales (high-street travel agencies and online portals) are already now remarkable with 58% above the previous year, which had already shown clearly higher bookings for the country on the Bosporus. With an impressive comeback Turkey is regaining market shares which it lost during the crisis to other travel destinations such as Spain and Greece. This means that Turkey has definitely overcome the decrease of visitors in 2016 and 2017, and continues the recovery we saw last year.

Summer vacation in Turkey is this year again in a particularly high demand: the booking revenues in German travel sales are already now remarkable with 58% above the previous year.

According to the numbers of the Turkish Ministry of Tourism, the number of German tourists that visited Turkey in 2018 was above 4.5 million.

Why do German tourists prefer Turkey?

Kerstin Heinen: It is not without reason that Turkey ranks third in the list of Germany’s most popular destinations – after Spain and Greece. The country offers a great variety of holiday opportunities and is easily accessible from all major German airports. In addition, the formalities are quite simple.

Turkey’s touristic infrastructure is very good and with the widely spread all-inclusive offer Turkey is especially attractive for families. There are only a few other destinations worldwide offering such a convincing price-performance ratio – especially for families.

In addition, the range of hotels has been developed powerfully in recent years. Not only have many 5-star facilities been created. Also more and more small, typical hotels can be booked.

Heinen: Turkey’s touristic infrastructure is very good and with the widely spread all-inclusive offer Turkey is especially attractive for families. There are only a few other destinations worldwide offering such a convincing price-performance ratio – especially for families

The main travel motivations for German tourists are sea, sand and sun. According to the German market report of the Publicity Office of the Turkish Ministry of Tourism, the travel motivation of ‘sea-sand-sun’ has the biggest share among motivations with 46%. ‘Wellness-health’ is in the second place with 9%, followed by ‘culture and education’ with 8%, and finally ‘city-tours’ is coming fourth with 7%.

As for the preferred destinations from Germany to Turkey, Antalya comes first with 2.3 million visitors, followed by Istanbul with 1 million visitors in 2018. In the same year, German tourists that visited Izmir were around 380 thousand and Mugla stood at almost 280 thousand.

What are the general impressions-feedback of these tourists after their visit to Turkey?

Kerstin Heinen: Turkey and Germany share a common interest in continuing the positive development in tourism. Germany is one of the most important source markets for the Turkish tourism industry and there is a high economic interest in good relations. Tourism is a form of international understanding. Travel enables dialogues between people and contributes to reducing prejudices. The positive development we saw in recent months is undoubtedly a result of the diverse activities to stimulate business from the Turkish and the German sides. This needs to be continued.

Firuz Baglikaya: Germany has been one of the leading countries from which Turkey received the most foreign tourists since the 1980s when the tourism industry increased its potential. In this regard, Germany is also one of the foremost countries that has been supporting the Turkish tourism industry. In general, we can certainly say that the customer satisfaction rate of German tourists who visited Turkey receives a significant amount of ‘repeating customers’ from Germany. There are many German friends who have been visiting Turkey each year for about 20-25 years. The average number of nights spent by German tourists is also increasing.

According to the numbers of TUIK, the average spending of German tourists since 2015 had increased each year reaching 832 USD in 2018.

The numbers given by the Turkish Statistical Institute (TUIK) indicate an increase in the nights spent by German visitors in the last two years. In 2015, which is considered a ‘record’ year with regard to the number of German tourists who visited Turkey, the average night spent was 10.2. This number reached 12.5 in 2018, as the highest average of the past 5 years. Again, according to the numbers of TUIK, the average spending of German tourists since 2015 had increased each year reaching 832 USD in 2018.

How does political tensions influence travel choices of German tourists?

Kerstin Heinen: Another prerequisite for Turkey’s further growth is that politicians are not creating new opportunities for customers to opt against a trip to Turkey. Political tensions between Germany and Turkey are likely to affect the travelers’ decision to choose a holiday in Turkey negatively, as we know from the recent past. The travel advice of the German Federal Foreign Office (AA) is decisive for German travel companies. This advice is made available to customers before making a travel booking.

Turkey and Germany are two friendly states with cultural and historical ties based on long years. There are 3.5 million people with Turkish origin living in Germany. Therefore, relations between the two states are beyond political and commercial ties. And we can say that this relation has become stronger with the popularization of tourism in the past 40 years. Turkey is one of the indispensable tourism destinations for German tourists both with regard to facility infrastructure, price-quality balance and hospitality. We believe that the position of Turkey in the German tourism market, which has solid foundations, will continue getting stronger in the coming years.

The New Turkey thanks Kerstin Heinen and Firuz Baglikaya for their comments.