For the U.S. and Turkey, NATO Continues to be an Unequal, Unreliable Alliance

Cooperation against terrorism under the umbrella of NATO was particularly highlighted during the Summit in Brussels. 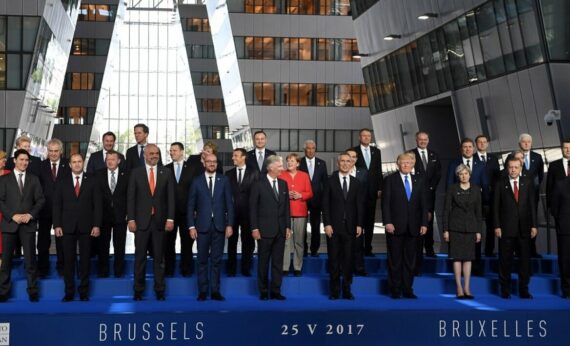 Although the latest NATO Summit held in Brussels on May 25, 2017 was a symbolic meeting meant to open the organization’s new headquarters and unveil some new memorials, it was significant since the new U.S. President Donald Trump, who has described the military alliance as “obsolete,” met the other leaders for the first time. As the leaders of all the member countries were present, several important subjects were also discussed in the summit alongside the openings.

Still shocked by Trump’s election victory, European leaders were concerned about the possibility of the U.S. President’s pressing upon them with new demands during the summit. During a period in which Russia particularly came into prominence with its aggressive policies, they did not wish the impairment of their security partnership with the U.S. although they abstained from shouldering the burden necessitated by this partnership. While the U.S. military expenditure reached 3.3% of the country’s GDP, Trump urged the European members of NATO to increase their military expenditures up to 2% of their GDP, asserting that the countries falling behind this would owe a debt to the alliance. For countries whose military expenditures are around 1.2% of their GDP, such as Germany, this demand is quite a challenge. To meet this demand by the U.S., Germany will have to increase its military expenditure up to $70 billion and allocate far more funds to compensate for insufficient spending in the past. Several European NATO members including Spain, Italy and the Netherlands do also have the same concern in the face of the U.S. pressure due to their low military spending.

Planning to boost U.S. military expenditure to more than 4% of GDP, the Trump administration’s push for European NATO members to increase their military expenditures signals Washington’s reluctance to provide for the safety of Europe and the expectation that European countries will allocate more funds for their own security. Trump’s insistence on this matter is understandable given that U.S.-based weapons manufacturers will earn considerable profits from the increased defense budgets. Not wishing to return from Europe empty-handed following his Middle East tour, during which he made multi-billion dollar arms deals with Saudi Arabia and other Gulf countries, Trump is highly aware of the fact that the European continental countries offer a market on par with the oil-rich Gulf Arab region.

It is not surprising that the first country Trump targets in this respect is Germany, which had a $295 billion foreign trade surplus last year. Being a businessman, it is unsettling for Trump to see Germany as the trade surplus champion of the world in a period when the U.S. had a $734 billion trade deficit. Having previously accused Berlin of pursuing an aggressive trade policy, Trump regards Germany’s excessive trade surplus as one of the causes of the excessive trade deficit in the U.S. A more balanced picture can be expected provided that Germany increases its military expenditure and the quantity of the weapons it buys from American companies.

The European countries are even more in need of the U.S. security umbrella given the aggressive policies Russia has adopted in the past years, which increased its military expenditure to 4.9% of its GDP. Therefore, although they are disturbed by Trump’s negative views on NATO and the speculations regarding Trump-Putin relations, it can be argued that the European allies will acquiesce to the pressure of the U.S. and increase their military expenditures.

One of other most prominent subjects at the NATO Summit was cooperation in the campaign against terrorism. During his Middle East tour, Trump called the leaders of the Islamic countries to joint action against terrorism in his address in Riyadh. He also addressed the NATO allies in Brussels to take joint action with regard to preventing terrorism. Despite that, the U.S. has been providing indirect support to the outlawed PKK, one of the most dangerous terrorist groups in the region, through the medium of the PKK’s Syrian offshoot, the People’s Protection Units (YPG).

The summit took place only a few days after the terrorist attack in Manchester, England; consequently, cooperation against terrorism under the umbrella of NATO was particularly highlighted during the summit. The joint fight against terror has been one of the main reasons for NATO’s existence since the end of the Cold War. However, it is not possible to say that the alliance’s members are in full solidarity with each other regarding terrorism, which has been posing a severe threat to most NATO countries.

Turkey does not rely on NATO

It is obvious that Turkey is the leading country in NATO effected by terror. Being subjected to simultaneous assaults by a number of terrorist groups, including the PKK, the Gülenist Terror Group (FETÖ) and Daesh, Turkey has not received the support it expected from NATO allies. It turned out that some allied countries adopted certain policies that sided with the terrorist groups in question. Having invoked Article 5 of its founding treaty after 9/11, NATO has not exerted any efforts to aid Turkey, which has been rocked by devastating terror attacks. Ankara’s outlook towards NATO has changed negatively as the U.S. and some European NATO allies protected or condoned the activities of the PKK and FETÖ militants who have been the perpetrators of the attacks against Turkey.

Various factors have brought NATO into discredit in the eyes of Turkey. Although listed as a terrorist organization, the PKK has easily found militants and financial resources in Europe. Washington openly provided weapons to the PKK’s Syrian offshoots, namely the Democratic Union Party (PYD) and its armed wing the YPG. Germany and several other NATO members are reluctant to recognize FETÖ as a terrorist group by dismissing FETÖ’s link to the July 15 coup attempt and giving asylum to FETÖ leaders, including military officers directly involved in the attempted overthrow. Besides, Turkey did not receive any support from NATO when it was targeted economically and politically by Russia at the end of 2015 because of the situation in Syria. This also played an important role in Turkey’s declining trust in the alliance.

In addition, Turkey was confronted with several problems while buying the weapons it needed from NATO allies to fight against terror and other threats in the Middle East, which constituted another component of the security-related crises between Ankara and Brussels. Following the July 15 coup attempt, the Western allies turned their backs on Ankara while Ankara was expecting their support. To add insult to injury, the allies issued some statements suggesting that Turkey’s NATO membership might be canceled due to Turkey’s measures against coup plotters during the critical period following the failed coup attempt. These developments fomented a profound unrest among the Turkish public and led masses to believe that some of the NATO allies might have been behind the coup attempt.

After having trust issues with its Western allies, Turkey sought rapprochement with Russia and leaned towards military cooperation with the country, which was sealed with the deal to purchase S-400 air defense missiles. Russia also gave overt support to Turkey after the coup attempt, which posed a major problem for NATO. While NATO has been unremittingly making mistakes that might result in losing their 65-years-long ally to Russia, some European members of the alliance intervened in the domestic affairs of Turkey by endorsing the “no” campaign ahead of the April 16 constitutional referendum in Turkey. Such factors tested Ankara’s limits.

After it was decided NATO’s would join the fight against Daesh at the summit, Germany reportedly considering withdrawing its troops stationed in İncirlik Air Base as part of the anti-Daesh fight, upon which Turkey remained indifferent. This also manifests the severity of the problems within the alliance. It will be a good start to resolve at least some of those problems if the European members of NATO and the U.S. realize that they have adopted certain policies against Turkey that are incompatible with the alliance, especially over the past few years, and start supporting Ankara in its fight against terrorist groups including the PKK and FETÖ.