Developments on the ground in Idlib and a bigger HTS presence will have serious implications for the international context and the signed Sochi agreement between Turkey and Russia. 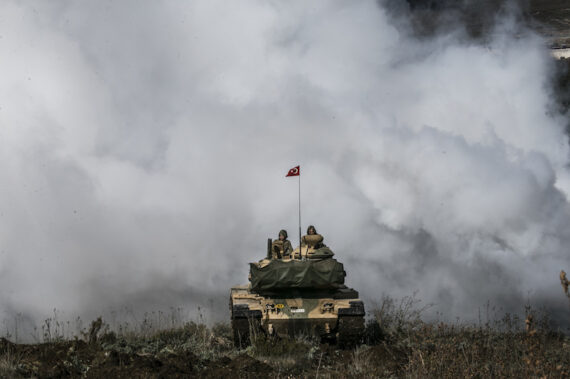 Turkish armoured vehicles, which were dispatched from Hatay to support the units at the Syrian's Idlib border, are seen as they receive training by Turkish Armed Forces, in Hatay, Turkey on January 12, 2019. Anadolu Agency

On January 1, 2019, renewed clashes occurred between the former Al-Nusra Front Hayat Tahrir al-Sham and the Nureddin Zengi Movement which is part of the Turkey-backed National Front for Liberation. As a result of these clashes in western Aleppo, Hayat Tahrir al-Sham (HTS) managed to expel Nureddin Zengi and crushed Ahrar al-Sham and Suqour al-Sham who joined the battle to help Nureddin Zengi against HTS. As HTS came out as the winner of the battle, militants managed to get control over strategic areas in Idlib and to force the administrative handover of almost all areas inside Idlib to the HTS-backed ‘civil government,’ called the Salvation Government. The military operation by HTS could be divided in two steps and it will have serious implications for the Sochi deal.

After the loss of the strategic town, the General Command of the Turkish-backed National Front for Liberation declared a general mobilization against HTS and called upon all elements of the umbrella to put up a fight against HTS.

After HTS started its assault on areas held by Nureddin Zengi, primarily the strategic Darat Izzah which links western Aleppo to Afrin, the later put up a strong resistance. However, as Nureddin Zengi lost the strategic hill at Sheikh Barakah, the town of Darat Izzah was captured by HTS on January 2. After the loss of the strategic town, the General Command of the Turkish-backed National Front for Liberation declared a general mobilization against HTS and called upon all elements of the umbrella to put up a fight against HTS. However, the call by the General Command of the National Front for Liberation wasn’t answered by factions of the umbrella except Ahrar al-Sham and Suqour al-Sham.

On January 4, HTS succeeded in capturing all areas held by Nureddin Zengi in western Aleppo and remnants of the later fled to the Afrin region leaving tanks and other heavy weapons behind. During the fighting between HTS and Nureddin Zengi, some sporadic clashes erupted between HTS and the Turkish-trained National Army. That night, the Russian air force bombarded areas captured by HTS in western Aleppo.

On January 5, HTS put pressure on the independent town of Atarib which was known for its fierce resistance against HTS and former Al-Nusra Front. As Nureddin Zengi was defeated, Atarib got surrounded by HTS and representatives of the town made a deal with HTS to handover the city to the extremists. According to the agreement, people who were wanted by HTS were allowed to leave the area towards Afrin. The loss of Atarib is important as the city was a role-model of non-violent resistance against HTS.

On 10 January, HTS and Ahrar al-Sham together with Suqour al-Sham signed a ceasefire agreement. The deal provides for an immediate cessation of hostilities, an exchange of detainees, the lifting of all checkpoints inside the region, and its unification under the authority of the Salvation Government meaning that administrative duties will be under the control of the HTS-backed ‘civil government’.

Implications for the Sochi Agreement

Developments on the ground in Idlib and a bigger HTS presence will have serious implications for the international context and the signed Sochi agreement between Turkey and Russia. After Turkey’s decisiveness to prevent a new humanitarian disaster in Idlib, and diplomatic pressure from western countries on Russia, Russia and Turkey signed the Sochi agreement. According to the agreement, a demilitarized zone should have been established along the front lines of Idlib. This demilitarized zone had to be cleared of radical elements such as Hayat Tahrir al-Sham and heavy weapons of the Syrian opposition factions. As a second step, the strategic M4 and M5 highways which link Latakia and Damascus with Aleppo should have been opened to free trade, but with the newest HTS campaign against the Syrian opposition, four different scenarios of the fate of Idlib may occur:

The first scenario seems to be the most unlikely among the listed. Turkey’s priority in its fight against terrorist organizations in Syria is the PKK/YPG. Also with the US withdrawal declaration, Turkey’s focus is on east of the Euphrates and Manbij. Additionally, Turkey’s military has to focus on the Aegean, the Black and the Mediterranean Sea while fighting terrorists inside Turkey and preparing a major operation into Syria’s northeast. Therefore, Turkey’s military will most likely not want to get involved into another major fight in Idlib.

The strategic M4 and M5 highways which link Latakia and Damascus with Aleppo should have been opened to free trade, but with the newest HTS campaign against the Syrian opposition, four different scenarios of the fate of Idlib may occur

The second scenario to approve a Russian-led military operation towards Idlib is a worst-case scenario for Turkey. A hugely feared humanitarian disaster will happen, and Turkey would see millions of refugees at its border trying to enter inside Turkey. As Turkey already hosts over 4 million refugees, this scenario would have a catastrophic outcome for Turkey. The burden of this scenario might be eased with a humanitarian safe zone along the Turkish border, but this wouldn’t be effective enough. Also the costs for Russia in such an operation would be very high which will be a topic Russia will think twice of.

As a theoretical third scenario, Turkey could try to change HTS internally into an acceptable structure to ease Russian pressure and to take Idlib into the transition process. Turkey already worked in separating the dogmatic wing of HTS and the pragmatic wing, strengthening the later. After the former Al-Nusra Front cut its ties to Al-Qaeda it rebranded itself as Jabhat Fath Sham and later formed HTS together with other factions in Idlib. After the formation of HTS, former Nusra sub factions who rejected cutting ties with Al-Qaeda defected and formed Hurras Eddeen. However, this scenario seems not to be a realistic perspective. Neither is HTS willing to change, nor is the international community ready to accept a rebranded HTS.

Postponing the time in which a solution for Idlib has to be found and implemented may help Turkey find a new window to act as a fourth scenario. For example, if the situation in the east of the Euphrates and Manbij becomes clear and the dust settles down, the Turkey-backed Syrian opposition might return back to Idlib. Also for the Russian side, a military operation in Idlib would be very costly and expensive. The Russians would need the active support of Iran-backed Shia militias to advance on the ground in the highly fortified region of Idlib. Russia is also aware that such an operation would take several months at least, and it would have to deal with HTS guerrilla warfare in captured areas. All in all, to freeze the situation in Idlib might be an option for Turkey and Russia, but a safe haven for Al-Qaeda affiliated radicals has to be prevented. Therefore, Turkey and Russia could agree on extended intelligence sharing to contain this threat. Also, the US might join hands with Russia and Turkey in these efforts.