If the predictions of the research companies are true and Le Pen is able to get to the runoff in France where a fourth of the voters are indecisive, Le Pen’s opponent will be elected president! For now, her most vigorous adversary is Macron. 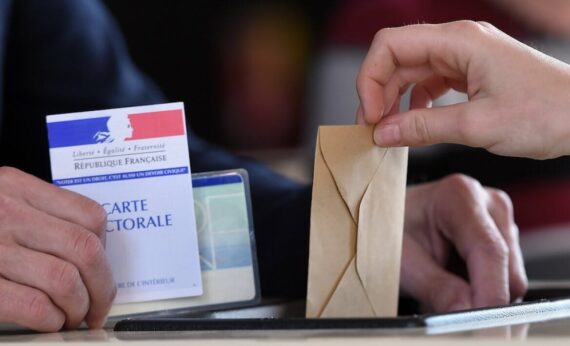 This must be the post-truth world. It seems to have started with Trump… He became the President of the US with a discourse against the global system, the same system Trump himself owes his wealth and power. Even the UK, the founding father of the liberal-capitalist system that is currently dominating the globe, is an opponent of the system! They have left a certain system with Brexit, after all. From now on, it seems that the politicians of the Western democracies addressing the public will try to prove that they are the opponents of the system and establishment.

This is indeed the buzzword of the French presidential elections. There isn’t even one candidate who is a proponent of the system! While all of the candidates claim that they are against it, each and every one of them accuses the others of being a proponent of the system. Looking at what each of them said, you can understand what they mean while talking about the system and what they are against. Otherwise, being just an opponent of the system is nothing but ambiguous. The discourses of Trump and the presidential candidates in France reveal that being against the system in Western democracies primarily means being against immigration with a hint of critique of globalization. A hollow and magical word which was created against the masses that shouldered the burden of 2008 financial crises and were desperate in the face of global capitalist system and technology! Moreover, the French have been governed by two contrasting figures, Hollande and Sarkozy, in the last 10 years and there were no differences, no changes. As change has lost its meaning, the experts of  political marketing provided a new product: being against the system.

Look at the left; firstly to Emmanuel Macron who seems to be leading the polls. ENA graduate, former employee of Rothschild Bank, never elected before, became the Minister of Economy of the Socialist Government by the will of President Hollande and garnered the support of the capitalists; yet, he is against the system. Isn’t that a bit odd? A student at Colombia University asked the “centrist” Emmanuel Macron whether he was anti-system. “It’s not enough to just claim that; we should observe how the system reacted to my candidacy. The establishment wanted to destroy me when I became a candidate,” he replied. Establishment, for Macron, is the Socialist Party, which didn’t support his candidacy and conducted a pre-selection process.

On the other hand, Socialist Party candidate Benoit Hamon, who is a proponent of the welfare state and has a pluralist rhetoric, says that he doesn’t want to maintain the system. Still, like Macron, he also served as a minister for more than two years in the current government. The third candidate on the left, former Trotskyist and senator, member of the Socialist Party since 1970, and a member of the European Parliament Jean-Luc Mélenchon is also against the system. He said “people are rejecting those who advocate the system that condemned them to death” and, turning towards the members of the press, added: “For instance, you are the system!”

The right-wing candidate François Fillon is also against the system! “My project will disrupt the order of those who benefit from the system,” he said. Fillon was the prime minister of the former French president Sarkozy. At first, it was revealed that Fillon made one of his businessman friends “gift” him three suits, each of them costing €13,000, while making another friend gift him two luxury watches. Then, it was found out that he had invented an imaginary job for his wife in the parliament, costing the taxpayers €800,000 over 30 years, and similarly “employing” his daughter and son for some years. He is now furious at the media, saying that it’s not the media that is to determine the next president.

What the system means for the far-right’s candidate and a member of the European Parliament Marine Le Pen is everything that stands against her party Front National, of course! Her promises offer more radical and structural reforms when compared to other candidates, that’s for sure. However, at this point, certain discourses which would be deemed scandalous a couple of years ago are now being uttered by politicians and intellectuals of both the classical right and left. It has become commonplace. Indeed, the Islamophobic approaches that were commenced over the burkini and headscarf, along with the anti-immigrant discourse, increased the power of Le Pen.

When her father Jean Marie Le Pen eliminated Socialist Party candidate Lionel Jospin in the first round and got to the runoff together with Chirac in 2002, this was a catastrophe for France. The father Le Pen had garnered 16.8% and 17.19% of the votes in the first and second rounds, respectively. According to the famous IFOP polls, today Marine Le Pen is expected to garner 22.5% of the total votes in the first round. Moreover, according to the same poll, this figure is only one point lower than Macron who seems to be leading the first round. Le Pen is ahead of Fillon (19.5%), Mélenchon (18.5%) and Hamon (7.5%), nevertheless. In a possible runoff, she may acquire twice the votes her father could in 2002. In a climate where the views of the far-right crept into both sides of the political spectrum and became normalized, Marine Le Pen who is deemed to be more moderate than her father is now a part of the system, not an outsider. Or, at least, it could be said that she has drawn the others into her system.

Le Pen’s most significant competitor Emmanuel Macron made a U-turn from his initial position at the very beginning of the election and, referring to Angela Merkel’s (in)famous statement, said “France is not a multicultural country.” When the Canadian prime minister was shown as an example on immigration, he said “I don’t agree with him. I would be much more authoritative in this issue.” Previously, these kinds of approaches would be perceived as something negative; now, it is not like that, not even a bit. Seeing that her rivals are using her discourses, Marine Le Pen felt the need to kick it up a notch and make the most assertive statement in the world: “During my presidency, there will never be a terrorist attack like those happened in Bataclan and Stade de France.” Considering all, the only candidate who seems to be an outsider to the system is the Socalist Party candidate Hamon. He was able to outmaneuver former Prime Minister Manuelle Valls who is known for Islamophobic remarks with votes from the suburbs in the pre-selection; however, he could not garner the same success in the campaign process.

While Jean Marie Le Pen wasn’t even allowed on TV, her daughter demanded the removal of the EU flag at the studio set as a precondition to her appearance on France’s most known TV channel TF1. Anti-EU sentiments were once an original discourse of her father; now, they are not. Both Le Pen and Mélenchon are promising to have a Frexit, making France, one of the two original founders of the EU, leave the international organization. It’s an interesting sight to behold; a politician of the far-right and a leftist are promising the same about the EU and we have precedence with Brexit. While they don’t want to exit the EU, Fillon is talking about the renegotiation of Schengen and Hamon is discussing that treaties should be revised. Therefore, it’s not easy to claim to be against the system and showing your difference.

If the predictions of the research companies are true and Le Pen is able to get to the runoff in France where a fourth of the voters are indecisive, Le Pen’s opponent will be elected president! For now, her most vigorous adversary is Macron; if this comes to pass, for the first time in the history of the Fifth Republic the largest political formations of the country, the Socialist Party and the Republicans, will be eliminated. He may become the president without being backed by a party, almost like Trump, and only by the support of the capitalists and political marketing. The vote he is to receive in the first round will be only a memory for him in the Elysée Palace.