France and Germany are at odds over several issues and the NATO Leaders meeting next week has the potential to heavily influence the future course of Franco-German relations. 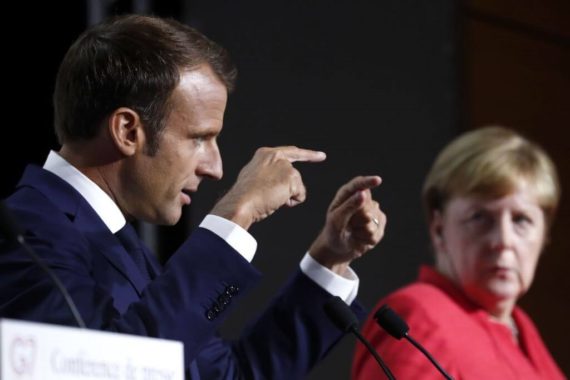 French President Emmanuel Macron gestures as German Chancellor Angela Merkel listens on during a press conference on the situation in Sahel during the G7 summit in Biarritz, south-west France on August 25, 2019. Photo by Ian Langsdon/AFP via Getty Images

Furthermore, while Germany and other EU countries, supported the start of lengthy membership talks for North Macedonia to join the EU, France was the sole EU member to veto the launch of talks. This happened despite North Macedonia’s fulfillment of all the prerequisites, even solving the country’s name problem with a successful referendum.

Following these discordant stances and statements from the French head of state, Germany’s Chancellor Merkel has openly condemned Macron, particularly his statements on NATO, stressing that his view does not correspond to hers. Merkel also stated that she does not agree with Macron’s “drastic words” and reconfirmed Germany’s commitment to its role within the NATO.

German media and general public paid rapt attention to the disagreements between both country’s leaders – and this is still continuing. Over the past week, for instance, most commentators have described the current Franco-German relations as being at their lowest point since a very long time. It is important to mention that both countries’ disagreements cannot be reduced to the current stances regarding the NATO – and in particular the alliance’s stance against Turkey, its military operation in Northern Syria, and the U.S. in the past few months.

France and Germany are also at odds over other issues. For instance, Germany, some other EU countries, as well as leading figures of EU bodies, criticized Macron’s positions against an EU-US trade agreement and his so-called one-sided ambitions concerning relations with Russia. While France opposes Germany’s Nord-Stream 2 project with Russia, on the other hand, France has interestingly launched its own initiative right before the G7 summit in August this year to come closer with Russia and President Putin. Moreover, the approach towards Russia was initiated without a consultation or even information exchange with other leading EU countries or the EU at all, which also worried many Europeans.

In addition, German political circles along with the federal government itself also emphasized the fundamental importance of NATO for Europe’s security, while Germany’s foreign minister Maas’ proposal for NATO reform received support from the NATO secretary-general Soltenberg. At the NATO foreign ministers meeting, Maas also warned, in a similar tone to Chancellor Merkel of “divisive tendencies” that could jeopardize NATO’s role, which he described as a “life insurance for Europe”. Tuesday, Maas continued his pro-NATO statements by once again indirectly criticizing President Macron’s controversial words.

Given the current discussions, misunderstandings, but definitely bitterness among the two leading EU and NATO allies, the upcoming NATO Leaders Meeting in London on 3-4 December 2019, will receive much more global attention. As President Macron continues to be criticized within European and U.S. circles, which do not accept the French president’s remarks on NATO, describing his words as wrong, there are some analysts who imply that Macron is making use of his relatively too strong political position compared to his German counterpart. It is most likely that President Macron is becoming increasingly impatient and more active in a political landscape in which, Germany is led by a fragile coalition government and Chancellor Merkel is not the head of the senior coalition party, the CDU, and she will quit politics eventually in 2021. In addition to this, German defense minister and current CDU chairperson Kramp-Karrenbauer’s political future is not clear, making the situation even more difficult vis-à-vis President Macron “with nearly royal power”.

Thus, the NATO Leaders meeting next week has the potential to heavily influence the future course of Franco-German relations, which previously enjoyed a very positive period at the beginning of this year and which culminated with the so-called Aachen treaty>; aiming to strengthen both countries’ strong partnership – in particular against the Trump administration. Nevertheless, the current deterioration in Franco-German relations might contribute to a simultaneous enhancement of the rather ambivalent and tense German-U.S. relations, which at least have clear mutual position regarding the importance and effectiveness of the NATO. It should be clear eventually that Germany, other leading EU/NATO countries, and the U.S. will not take President Macron’s ambitions and harsh criticism against the NATO ally Turkey very seriously. The additional fact that Turkey is too important for NATO, outweighs the French president’s France-centred ambitions, as well as his non-realistic remarks.