Just as the Saudi Crown Prince Mohammad bin Salman offered to cooperate with Britain to spread “moderate Islam” together, earlier this year, Hakim el Karoui, an advisor to the French President Emmanuel Macron, embarked on cooperation with the UAE to invent a “French Islam.” 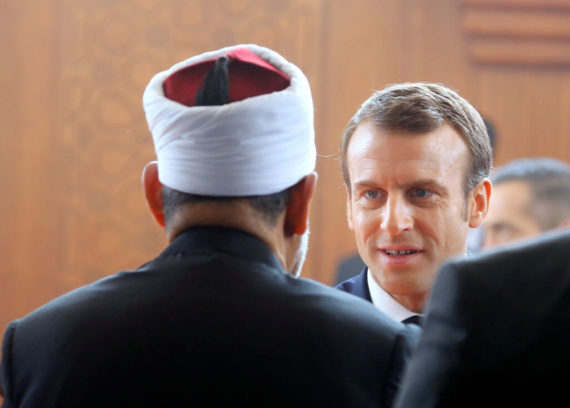 French President Emmanuel Macron (R) is received by Ahmed al-Tayeb, the Grand Imam of Al-Azhar, the most prestigious seat of Sunni Islamic learning in Egypt, during his visit to the Azhar headquarters in Cairo on January 29, 2019. Getty Images

Just as the Saudi Crown Prince Mohammad bin Salman offered to cooperate with Britain to spread “moderate Islam” together, earlier this year, Hakim el Karoui, an advisor to the French President Emmanuel Macron, embarked on cooperation with the UAE to invent a “French Islam.” The close relationship between the Crown Prince bin Salman and the Emir of the United Arab Emirates (UAE) Mohammed bin Zayed is already known.

Last year, following his visit to Egypt and before his visit to the UK, Crown Prince Salman gave an interview to The Telegraph, saying that Saudi Arabia can cooperate with Britain to disseminate “moderate” Islam. He then paid a visit to the US, where he gave another interview to The Washington Post, in which he stated that during the Cold War period, Saudi Arabia tried to spread Wahhabism upon the request of the US in order to combat communism. Crown Prince Salman added that Saudi Arabia left this mission later on. Therefore, it is quite natural and acceptable for Saudis, who nowadays seek to get rid of one interpretation of Islam to replace it with another, to discuss inventing a “moderate” version of the religion together with the British, and well, this makes the transatlantic voyages of the Crown Prince conceivable!

Looked from the same perspective, it could be understood, albeit indirectly, why el Karoui chose the UAE to cooperate with to invent “French Islam”. To put it more clearly, we can look to his direct statements in an interview he gave to a newspaper when he said: “I think the Emirates have a major role, because they have never contributed to the spread of political Islam, but rather spearheaded the fight against this very ideology.” He is actually right in his words. When Mohamed Morsi came to power after democratic elections were held for the first time in Egypt’s history, he was regarded as the embodiment of the phenomenon defined as “political Islam”. Not only by France, but the entire West. Although they have been steered by the US, both the UAE and Saudi Arabia have played a considerable role in toppling the Morsi government through a military coup and replacing him with Abdel-Fettah al-Sisi.

El-Karoui is perhaps referring to this while speaking about how the UAE spearheaded the fight against the ideology of “political Islam”. Despite this, news articles and comments have appeared here and there criticizing el Karoui’s stance with regards to the UAE and “French Islam”. But el Karoui, who has been ruminating on this subject for years, and has prepared a report entitled “the Islamist Factory”, had an answer: “As I always say everywhere, I have told the journalists that the voice of the enlightened Muslims must be heard to fight against Islamism. In all Muslim countries… In Algeria, Britain, France, and the UAE…” This statement spurred reactions from social media, such as “what exactly does an “enlightened Muslim” mean?” First of all, it is improbable that el Karoui would consider himself a “non-enlightened” Muslim since such a Muslim probably could not set the agenda for religious clerics that would guide Muslims. Something he has tasked himself to do. For this, last year, el Karoui prepared a 617-page report entitled “the Islamist Factory” with Paris-based think-tank Institut Montaigne, which will be presented to and discussed with UAE officials. According to his remarks, he also believes that the UAE could make significant contributions against a possible extremist ideological attack by working on a “theological renewal”.

El Karoui also tweeted: “First it was said that I was sold to the Saudis, and now they are telling the same for the UAE. They will probably say that I am sold to other countries like Qatar and Egypt in future. But this is not important at all.” This is true, it does not have any importance for him. In fact, he could have invented “French Islam” with Tunisia’s overthrown leader Zine al-Abidine Ben Ali had he not been toppled. A person who el Karoui had previously served as a consultant. Though he was annoyed when this was exposed, he made a statement saying “I’ve just forwarded two notes”. It turned out that el Karoui served Ben Ali as an advisor in his last days in power for a “smooth” transition to “democracy” In fact, El Karoui, who is on the board of the French Telecom company Orange in Tunisia, made this consultation on the request of Ben Ali’s son-in-law Marwan Mabrouk, who holds a 51 percent stake in Orange. El Karoui is also the nephew of two former Tunisian ministers.

El Karoui’s father is a Tunisian academic who came to France in 1973, and his mother is French Protestant and a renowned academic specializing in finance mathematics and probability. He is not an ordinary French of Tunisian descent. He served as an advisor to the former French Prime Minister Jean-Pierre Raffarin, was assigned to establish the Institute of Islamic Culture by the former socialist Paris Mayor Bertrand Delanoë, was a director at the Rothschild Bank (where he was first acquainted with President Macron though they did not meet one-to-one at that time), founded the 21st Century Club with Sarkozy’s former Justice Minister Rachida Dati and was assigned by President Macron to invent a “French Islam” earlier this year.

El Karoui aims to officially establish the Muslim Association for Islam in France (AMIF) and generate an income of €100 million through this association. An indirect tax will be excised on halal food consumed by Muslims and on the Islamic pilgrimage Hajj, and 60 to 80 Muslim clerics will be trained as part of the first phase of the association’s activities. The ultimate target to raise around 1000 professional imams who could completely “devote themselves” to their profession. He also argues that instead of imposing only one specific interpretation of Islam, a high-quality network of imams could be formed and this network could be structured according to the diversity of beliefs. However, it will be ensured that these imams will respect “the republican values” of France. He commented on these republican values before in his article titled “French Islam”. Of course, there are imams with similar opinions in France. For instance, Bordeaux imam Tarik Oubru is alleged to be one of the five who will be on the board of directors of AMIF, entrusted with the task of inventing “French Islam”. He is an acquiescent figure who is of the opinion that centuries-old Islamic commandments impede Muslim integration to today’s French society. He believes that Muslims should loosen these rules.

As can be inferred from a whole slew of interviews he gave, Oubru is an imam who draws very controversial comparisons: “In France, secularism recognizes the freedom of expression in both private and public spheres unless public order is disturbed. So, Muslims are entitled to wear a headscarf, but this conflicts with the French culture. The French society does not like seeing religious symbols in the public space. To integrate into France, Muslims can minimize their visibility instead of displaying it, like the animals who can adapt to the colors of their environment. The only way to democracy is to render their identities invisible.” When the French journalist interviewing him asked whether Muslims would not feel abased or like second-class citizens if they hide their identity, the Bordeaux imam answered: “It is said that Islam is a religion of modesty. So, it is not true to attract attention by wearing headscarf. God is hidden, so are the angels.”

France has the highest Muslim population in Europe, around 5.7 million people, which corresponds to eight percent of the country’s population. As Hakim el Karoui is supported by an imam that suggests Muslims should become invisible like angels, el Karoui does not need to consult with the UAE on the subject of reforming Islam. Despite not referring to angels most likely due to his secular background, Jean Pierre Chevenement, the president of the Foundation of Islam for France, voiced the same opinion when he said that “Muslims should be discreet”. This is the true color of “integration” and “French Islam”, one that aims to render Muslims and Islam completely invisible.