If French secularism turns into full-fledged republican authoritarianism, as the course of events illustrate, Islamophobia will just be another worrisome signal of a huge shadow falling on the old continent. 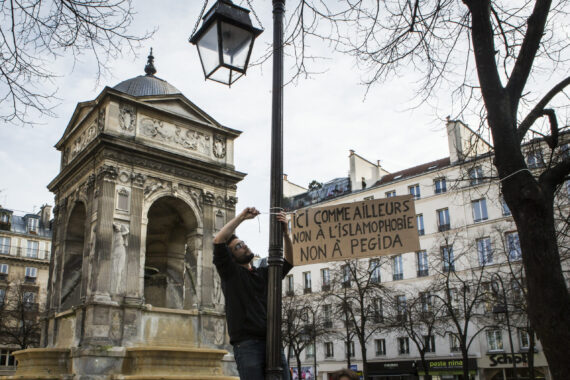 A placard reading 'Here as elsewhere, No to Pegida, No to Islamophobia' is seen as International human rights groups gathered at Fontaine des Innocents to call on France to suspend its state of emergency and end what one has described as "abusive and discriminatory" measures in Paris, France on February 6, 2016. Anadolu Agency

Islamophobia in Europe is not a new phenomenon. With the rising right, including AfD in Germany and the National Front in France, the question of whether secularism (or what the French call lacïté) in France is feeding anti-Muslim sentiment and whether the notion of secularism itself is becoming republican authoritarianism has re-risen on the agenda. The latest event that sparked the secularism debate was when a far-right local authority in southern France scrapped pork-free school meals in January this year. Before focusing on examples that support the argument that French secularism is becoming republican authoritarianism, it’s important we fully understand the foundations of these concepts.

While there exists varied definitions of the term ‘secularism,’ and many arguments as to how it should be applied, secularism generally accounts to the separation of the state from religion in order to ensure political neutrality. One important divergence in the secularism debate is the difference between “liberal” and “republican” secularism. In ‘Secularism and Freedom of Conscience,’ Jocelyn Maclure and Charles Taylor distinguish between the two. While liberal secularism is defined as a “model of governance whose function is to find the optimal balance between respect for moral equality and respect for freedom of conscience,” republican secularism is defined as the “emancipation of individuals and the growth of a common civic identity, which requires marginalizing religious affiliations and forcing them back into the private sphere” (Maclure and Taylor 2011, p34). French lacïté, or republican secularism, is one of its kind as it is deeply rooted in the French Revolution of 1789.

The contemporary secularism debate in France first sparked with the 2004 French Law on Secularity and Conspicuous Religious Symbols, which banned the headscarf, Jewish kippah and Sikh turban in public spaces. While this law was enacted in order to ensure the “neutrality” of schools, it is highly ironic that the French state continues to fund religious – mainly Catholic – schools. The 2004 law did not only apply in the sphere of education and employment, but for example, a Muslim mother was not allowed to accompany her child at the cinema on a school trip due to wearing a headscarf. Youssra was told that if she wanted to accompany her three-year-old son she had to remove her hijab, as it was apparently an “affront to the secular French Republic.” This is just a simple example of how extreme the idea of creating a “common civic identity,” which is the aim of republican secularism, can become. Thus, more recent laws and regulations strengthen the argument that the French understanding of republican secularism has left itself to authoritarianism, which not only increases and deepens Islamophobia in the country, but also allows for the success of structural racism and discrimination.

As mentioned in the introduction, in January this year Julien Sanchez, the National Front mayor of Beaucaire, a town south of Avignon, abolished “substitution meals,” or pork-free school meals, on the first day of the new school term. This step affects about 150 – mainly Muslim – students, who take the “substitution meals.” Sanchez defended his position by claiming that pork-free meals were “anti-Republican.” This, again, could be interpreted by some as an attempt to create a “common civic identity” and therefore could be somehow justified in the name of republican secularism. However, as opposition leader in Beaucaire, Laure Cordelet, put it, this very act is an “attack on the rights of children,” which can in no way be “justified in the name of secularism.” Not only does this act infringe upon one’s basic right to practice religion, it merely reduces an individual’s freedom of choice.

What is problematic is the normalization of such discourse and such bans. Due to political factors, including the terror attacks that happened in France over the past two years, the French state, as noted by Yasser Louati in ‘Islamophobia in France,’ “in addition to the systematic backlash from ordinary people and the hysteric news coverage,” has “engaged in a brutal counterterror campaign that deliberately targets Muslims.” Living in a neo-liberal world, we can argue that the legitimization of such discourse from the state will lead to an increase of Islamophobic attacks. According to figures published by the Coordination Centre Against Racism and Islamophobia (CRI), in 2016 a total of 567 Islamophobic attacks were registered, of which 356 cases were related to the state of emergency. 95 of these registered cases were related to public services and administrations, including schools and hospitals.

The couple of examples referenced to in this short piece are mere micro illustrations of the greater picture in France. By discriminating against particular religions and ethnic groups, the French state is unaware of the fact that it will lead to greater isolation in society, which can open the door for radicalization. This is not to say that people will automatically fall for radicalization due to such policies, but it is an emphasis on the very fact that as individuals feel increasingly marginalized and unaccepted in society, radical terrorist groups will find it easier to utilize on this sense of non-belonging. If French secularism turns into full-fledged republican authoritarianism, as the course of events illustrate, Islamophobia will just be another worrisome signal of a huge shadow falling on the old continent. 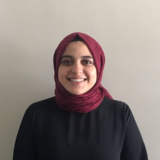 Aysegul Gurbuz received her B.A. in Politics and International Studies from the University of Warwick in 2016. She continued her graduate education at Bogazici University, where she received her M.A. in International Relations: Turkey, Europe and the Middle East in 2017, with a project titled ‘Unintended Consequences of Policy Making: The Case of Prevent.’