From Beyoglu to the Globe: Encounters of Ara Güler

World-renowned Turkish-Armenian photographer Ara Güler, who went by the nickname "Eye of Istanbul," passed away on Wednesday 17 October after suffering from kidney failure. 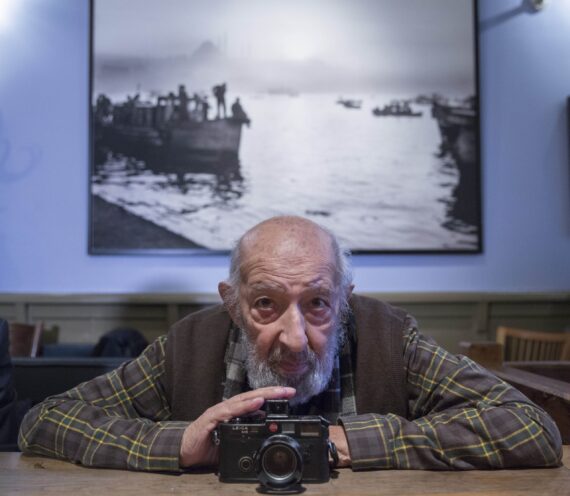 “I interviewed her in her residence in New Delhi and I flew to Bangkok on the same night. When was entering my hotel room, I saw a report on a newspaper that read Gandhi was apprehended, which meant that I was the one having the last picture of her at that moment.”

“Chaplin is the man who shaped my world and vision and taught me how to look at life. Back then, he was living in a manor house in Switzerland. His wife Oona was the daughter of the renowned American writer Eugene O’Neill. I waited in front of the manor house for three days to shoot photos without paying attention to the severe winter cold. Finally, Oona was afraid that I might freeze and told me that I could talk to Chaplin as long as I would not take any photos. He didn’t want to be remembered as a paralytic on a wheelchair as he knew that the camera I was holding was relentless. It would be unkind to shoot him in that condition as he embodied the most nimble character of the world, so I didn’t took any photo of him although I had a chance to do so.”

“I went to his hotel in Paris; he was staying in room 101. I opened his door; he stared at me and said: ‘Why do you want to shoot my photo?’ I said: ‘Because you are very famous.’ Then he said, ‘My one minute costs 25 thousand dollars,’ to which I replied: ‘Great, but I can’t take photos within one minute!’ then he kicked me out of the room. On the same night, I had dinner with a Jewish friend of mine and told him that Dali kicked me out, upon which he said that he was his godfather. I told him: ‘But how is this possible? You are Jewish and he is Christian.’ He told me not to fret over it, and spoke with Dali. Next morning, we went to Dali’s place at 11 o’clock. As we were staring at each other, I said to Dali: ‘I must take a photo of you. You do not have any decent photo.’ And he told me to come over again when there was no one around. I went over again the next day at 10 o’clock, but three other journalists showed up with me. So I told him, ‘you said there won’t be anyone but me,’ he said that he would dismiss the others. Then, showing his cane with a silver handle, he asked us: ‘What is tar’s formula?’ to which no one could give a proper answer. He made up some random formula and said: ‘I am Salvador Dali. If I plunge this cane into tar, this halfpenny cane becomes 50 thousand dollars. If you do the same, they call you crazy. Now go and write what you could make from what I just told,’ and kicked the three journalists out. I took his photos on that day.”

“I could never forget the photoshoot with him because it was a tough one. I wanted to take a photo with a focus on his feet. As he was a director, he knew much about photography and so he acted . I can never forget that we started working at 11 a.m. and finished at 5 p.m. He was angry at me at first, to which my inner voice said: ‘I am working with big-time guys like Picasso. Who are you? If you are Hitchcock, I am Ara Güler.’ After a while, we started joking around and got used to each other. At some point, he saw that I was at least as funny as him, so we ended up getting on well.”

“I tried very hard to meet Picasso but couldn’t make it as he wasn’t allowing anyone to see him in order to focus on his painting. Our publishing house was going to publish a book of his. And its boss was my friend from the tavern. I told him that I would never speak to him again if he did not take me to Picasso. This is how I managed to meet Picasso. He liked me, and I stayed at his house for three days. One time, he turned to me and said: ‘You are shooting my photos, so let me draw a picture of you.’ Imagine that, Picasso, the greatest artist alive at the time, was going to draw me; but he was around his 90s then. Thinking that he might forget what he just said, I looked around to find a piece of paper but couldn’t find any. So, I picked a book out of his library, opened its cover and handed it to Picasso, thinking that I would tear the page and take it anyway. He drew me and signed the picture. There is one original Picasso work in Turkey, which happens to be in my house.”

“I heard that Onassis’ yacht was coming. So, I immediately rented a fishing boat and found the yacht. Then I climbed over the yacht’s mast and started taking photos. Maria Callas saw me at that point. She liked that I was taking photos from there and called me over. Then, she opened her purse and started putting on makeup, and I took loads of photos of her.”