From CHP to HDP: a Hidden Tunnel in Turkish Politics

On the way to 2019, despite the discomfort that it creates among its voter base, Kilicdaroglu’s CHP will reintroduce old lies with new facets while adopting a more aggressive approach by increasing cooperation with radical leftist organizations and the HDP/PKK. Worse, they may attempt to ignite a sectarian conflict within Turkey. 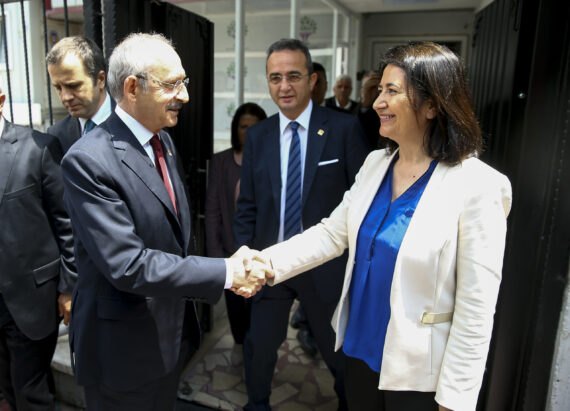 On May 6, 2010, around midnight, a tape was released on the internet. It was a recording of intimacy between former Republican People’s Party (CHP) chairman Deniz Baykal, who had served for 18 years, and his then-assistant CHP deputy Nesrin Baytok. The tape shook the foundation of the CHP. At first it was asserted that the tape was fabricated. However, this claim was not enough. CHP youth gathered in front of Baykal’s house, set up tents and protests. On May 10, Baykal stated that he was resigning (with an implication that he may return one day). During his resignation, he claimed that the whole incident was a scheme that was carried out by the government and not by those in Pennsylvania (referring to FETO leader, Gulen).

Along with Kemal Kilicdaroglu, who had already announced that he would not run for chairmanship, Onder Sav, Baykal’s 53-yearlong brother-in-arm, visited Baykal at his house. Later on May 22, Kilicdaroglu announced his candidacy. Since that day, CHP was re-designed and became a party that was being guided by an invisible hand.

A year and a half later, one of CHP’s former deputy chairs, Onur Oymen, explained how the party was being re-designed. Stating that he found documents revealing that the scheme against Baykal was a “U.S.-backed operation,” Oymen spoke about a report that was relayed to him in early 2009. In a report focused on CHP prepared by an NGO called Silkroad Institute, it was stated that “Baykal will resign and Kilicdaroglu will replace him.”

As was later revealed through Wikileaks, former U.S. Ambassador to Ankara was sending similar reports to Washington, while Hilary Clinton was questioning whether this was possible and feasible in her letters to the U.S. Embassy in Ankara. With a clearly U.S.-based operation, a “more appealing chairman” was brought to lead CHP.

Then, we witnessed the media, and in particular Dogan Media Group, polishing and praising Kilicdaroglu. He was given many titles including, ‘Gandhi Kemal,’ ‘the Calm Power,’ ‘Man of the People,’ and others. Photos illustrating him with Deniz Gezmis’s famous parka were being hung on walls, while he himself utilized the slogan, “I’m Kemal from Dersim. I’m Kemal the revolutionary.”

CHP: repeat what is prompted

None of these developments were enough for CHP to win or to increase its vote in the 2011 elections. In fact, I don’t believe that this was the point at all. This re-shape of CHP had different aims. These aims became clearer when people ravaged private and public properties during the May 2013 Gezi Park protests and was revealed during the December 17-25 judicial coup attempt. Kilicdaroglu played montaged tapes that were acquired through illegal means in Parliament. The aim was clear: Erdogan was to be deposed, he would flee abroad and would be brought back for a trial.

Without questioning validity, the new CHP administration were voicing whatever they were being told. More, they also began to disregard legitimacy in certain events. For instance, their deputies did not recite the parliamentary oath after the 2015 elections. The CHP deliberately elected imprisoned people as their candidates, they did not recognize the result of the April 16 referendum and de-famed members of the judiciary when jurors decided against them. More, the party began to spread false news accusing the government of sending weapons to Daesh. They still propagate this claim. Regardless of being rebutted, another cheap lie CHP continues to use is that the AK Party has 120 deputies using ByLock (a mobile app used by FETO members), or the claim that Erdogan and his family have millions of dollars offshore in the Isle of Man.

The party administration also began to adopt an increasingly aggressive discourse as their lies were uncovered. After the results of the June 7 elections were announced and when the AK Party failed to form a government, CHP’s Gursel Tekin told the media that they were going to seize all “pro-AK Party media outlets,” and question businesspeople.

Moreover, the CHP had began to flirt with the Peoples’ Democratic Party (HDP). HDP Chair Demirtas and CHP’s Safak Pavey said “we shook them [the AK Party] good.” The same CHP also defamed the PKK’s armistice and demanded the trials of all prominent actors of the Reconciliation Process, including a trial of President Erdogan.

The real disaster occurred right after the July 15 coup attempt. Fleeing the airport with the allowance of the putschists and watching the coup attempt from his TV at home, Kilicdaroglu first claimed that the coup was a “theater play” and then asserted that it was a “controlled” coup attempt. Intriguingly, FETO militants also defined the coup attempt with the same words in the same order. Then Kilicdaroglu began talking about a “July 20” coup, in which he was referring to the announcement of the state of emergency aiming to eradicate all FETO elements within public institutions. In short, FETO prompted, and Kilicdaroglu voiced these on “legitimate platforms.”

During his parliamentary group meeting on January 16, Kilicdaroglu made a speech that accused the people who resisted the July 15 coup attempt. Referring to the statutory decree which rendered people who resisted the coup immune for their acts on the very night, Kilicdaroglu said the following: “They [AK Party] have lent immunity to civilians who resorted to violence. They have transferred the state’s power to extra-state militants.” Civilians who were targeted by tanks and military aircraft were labelled “militants” and their resistance was described “illegal.” Meanwhile, Kilicdaroglu defines soldiers who fired on civilians on the Bosporus Bridge as “innocent privates who were slaughtered.”

The CHP leader continues to talk slanderously about topics that are sensitive to people and in this respect, he is trying to legitimize the July 15 coup attempt and illegalize the successful resistance. Considering the fact that he is trying to protect certain individuals who have been arrested for being FETO members, Kilicdaroglu is seemingly trying to save the terrorist organization. His aims were the same when he visited closed-down media outlets that belonged to the terrorist organization. This should probably be considered normal for a person who is surrounded by FETO – his chief advisors and deputies have been arrested for collaborating with the group – and whose party employs the same “political” discourse as the organization.

An obstruction in Turkey’s development

Today CHP is becoming an increasingly radical opposition. Using the DHKP-C slogan, “Halkız, haklıyız, kazanacağız,” (“We are the people, we are just, and we will win”) and by appointing Canan Kaftancioglu – who praised the Gezi Park protests – as the Chair of CHP’s Istanbul Provincial Chapter are indicators of this. In my opinion, HDP is digging a tunnel into CHP. It is known that a significant number of CHP members are against HDP/PKK. Indeed, many loyal CHP supporters protested the election of Kaftancioglu.

For instance, referring to Kaftancioglu’s “I’m not a footman of Mustafa Kemal, but his comrade,” Umit Kocasakal, who announced his candidacy to CHP chairmanship said: “Those who have issues with the motto ‘we are the footman of Mustafa Kemal,’ with the unitary structure and those who praise the HDP cannot be part of Ataturk’s party.” Moreover, he accused Kaftancioglu with being the “footman of other powers.” He also added that a “foreign software” was installed to the party.

It is understood that CHP is trying to keep the anti-Erdogan bloc, which it continually attempts to stimulate, alive on the way to 2019. Undertaking the task of politically obstructing Turkey’s march towards a grand future, the CHP administration is bent on achieving their goal. They object to every project. They even objected to the Kanal Istanbul project when its route was announced.

More, CHP is seeking every opportunity to prevent Turkey from having a say in the future of the Middle East. Considering that Kilicdaroglu miraculously became the chair of CHP right before the beginning of the Syrian Civil War, this makes more sense. With the support of the former central media, the CHP bloc are discussing and making people discuss all kinds of matters that would consume most of the government’s energy. In this respect, they are trying to occupy the government in order to ensure that with these trivialities, Turkey would not have time to engage in Syria, Iraq and the wider region.

On the way to 2019, despite the discomfort that it creates among its voter base, Kilicdaroglu’s CHP will reintroduce old lies with new facets while adopting a more aggressive approach by increasing cooperation with radical leftist organizations and the HDP/PKK. Worse, they may attempt to ignite a sectarian conflict within Turkey. They may seek ways to enable a radicalized Alevi youth. In addition, they will definitely try to benefit from trials that are being conducted against Turkey in the U.S. and fabricated documents provided by FETO.

This strategy, which is doomed to fail, may slow down Turkey’s march. However, will never halt it. It will be CHP’s one-way ticket to marginalization.

Cengiz Alğan completed his BA in the Department of English Language and Literature at Gazi Univeristy, Ankara. For the last two years, Alğan has been working as editor and commentator for Büyüteç, a weekly TV program on politics.