From the Nixon-Reagan Tapes to Trump’s Tweets: Racism Has a Tradition in US Politics

Something has cracked in America: the ruling elites are clueless and the masses are anxious and politically neurotic. Racism and racist tropes are normalized and rendered mainstream. 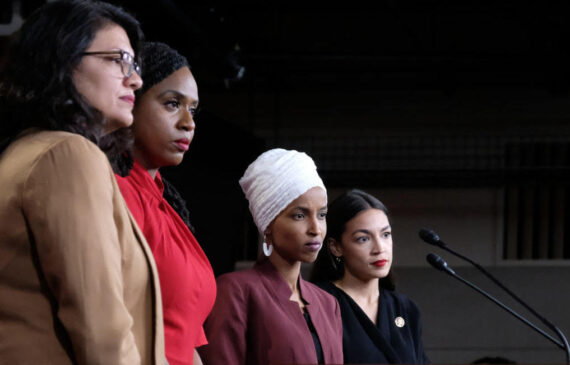 On 31 July, the Washington Post’s retrospective podcast, Retropolis, published an interesting article. Interesting in the following sense: the article’s revelations were not surprising nor eye-opening, and things like racism, xenophobia and hatred are already normalized in our societies, and most crucially, rendered politically-mainstream in this age of post-truth politics. Nevertheless, the article’s revelations are significant in that it highlights some grim realities of politics-power practices in the west of the Atlantic – one based on racism, superiority and hate.

In short, this is what the article divulged: once upon a time, then-California Governor Ronald Reagan called President Richard Nixon and uttered racist words about Africans. He was infuriated that a delegation of African diplomats at the UN didn’t align themselves with the US position regarding the China–Taiwan sovereignty question. The story goes on: Governor Reagan was appalled and disgusted after watching diplomats from Tanzania celebrating the results of resolution 2758 on television. He called his friend Nixon at the White House to express his anger, frustration and most importantly – for him I suppose – his crystal-clear racism.

“To see those, those monkeys from those African countries — damn them, they’re still uncomfortable wearing shoes!” Reagan said. I suppose after uttering those words Reagan may have felt catharsis and joy as he relished in his power, hatred and racism. The article suggests that Nixon laughed loudly, joining his friend I guess in enjoying the “Freudian base-instinct” moment that they had together. The president – Surprise! A Republican – replied: “Well and then they — the tail wags the dog, doesn’t it? The tail wags the dog”.  It is no surprise that these words were uttered by two White Anglo-Saxon Protestant males, or WASPs as defined by Sociologist Andrew Hacker. The same week the Nixon-Reagan tape came out, multiple gun shootings motivated by White supremacist terrorism ravaged the US. On July 28, Santino William Legan, 19, opened fire on a festival in Gilroy, California and killed three people. Again, on August 3, Patrick Crusius, 21, killed 22 people and wounded dozens more at a Walmart in El Paso, Texas.

Nixon, Reagan and the war on African Americans

Hip hop legend Shawn “Jay Z” Carter’s video The war on drugs: From Prohibition to Gold Rush underlines that America’s so-called “war on drugs”, one that was started by President Nixon and expanded under President Reagan, was a war against citizens of the United States – African Americans in particular and poor families. Although the drugs epidemic in America has its root-causes in what Belen Fernandez explains as: “when members of the US ruling elite thought it would be cool to facilitate drug trafficking by right-wing terrorist mercenaries intent on sabotaging the left-wing government in Nicaragua” the detrimental consequences on African American communities persist even today.

Police killings and brutality soared during the war on drugs. Most, at the receiving end of this violence were young African American and Hispanic males – a social strata always deemed dangerous to “white America”. Arrests and incarcerations of African Americans sky-rocketed, in what filmmaker Ava DuVernay termed a “transition from slavery to mass incarceration”, a subject matter powerfully explored in her film 13th (2016). Consequently, Nixon and Reagan were no friends to African Americans and African peoples. They were racist xenophobes who despised Black people. Again, I am not surprised that tapes of them slurring Africans exist and are available to all.

In addition to all that, the current holder of the Oval Office has his own share of racial misdoings. I will not be surprised about revelations and tapes about Donald Trump when he finally leaves the office. But we already heard enough from him: from sexism to racism. In the course of the last few weeks, Trump’s tirade against “the Squad” – Ilhan Omar, Alexandria Ocasio-Cortez, Ayanna Pressley and Rashida Tlaib – has occupied global media and captivated our attention. By tweeting racist tropes  like “go back to your home country” or “go back to Africa”, Trump also officially joined the club alongside Nixon and Reagan.

Donald Trump’s comments in January 2018 are also a case in point. “Why are we having all these people from shithole countries come here?” the president had lamented. He added that America only needed immigrants from European countries like Norway to boost its economy. However, African, Caribbean and South American immigrants – documented or undocumented – are an essential component of the America’s labour force, service industry and economy. Scandinavians only come to America for education and tourism – not for work. The president either doesn’t know this, or maybe he just wishes America was a whites-only country. Moreover, this is a president whose administration also puts young kids in cages and retweets white supremacists and neo-Nazi propaganda. We live in interesting times indeed.

Last but not least, last week, the president attacked civil rights icons Rep Elijah Cummings and Rev. Al Sharpton. In a thread of tweets, the president derided the conditions of the city of Baltimore – an African American majority city. Baltimore has its own chronic challenges: violence, joblessness, and crime. But who is to blame for all its plights? African American majority cities and suburbs are the most neglected in terms of social services and government capacity-building policies. Trump’s tweets on Baltimore are insincere. Baltimore and its peoples aren’t inherently “filthy”, successive American administrations betrayed them, and Trump is not doing any better for them and many other cities. Insulting and patronizing civil rights icons when accusations of racism hang over his head isn’t doing Trump any favours at the moment.

Observers of American politics and its foreign policy around the globe suggest that a new America is emerging under the presidency of Donald Trump. One that is incoherent in terms of its foreign policy and uncertain of its role in global issues and challenges. This observation is valid. For instance, prominent journalist Andrew Mitrovica describes the new America as “a banana republic”. For Mitrovica, the Trump administration is corrupt and incompetent to the core. And Trump – like a ruler of a banana republic – is “rule-of-law-allergic”. The president’s campaign team’s coordination with a foreign adversary to win the 2016 election and the sabotage of the Muller investigations that attempted to evade justice are signs of being a banana republic.

Furthermore, this new America is undermining democratic institutions, international organizations and trans-national treaties that hold the fabric of our current global order together. President Trumps’ attacks on American judges and institutions, the UN, UNHCR, the Paris climate treaty are emblematic of a new America in formation. America can no longer openly claim to be a pro-democracy “shining city upon a hill” but is rather one that celebrates dictators and totalitarian strongmen across the globe. Add to this, the prevalence of Tiki-torch branding white supremacists and the rise of violence against religious and ethnic minorities across the nation and you will have a glimpse of the soul of America – one that shrouds itself in the rhetoric of the American dream but nevertheless is exposed for what it is really is during hard-times.

It is in light of all these converging nexuses that one can comprehend Reagan’s racist taped call, Trump’s attacks on minorities and their representatives. Something has cracked in America: the ruling elites are clueless and the masses are anxious and politically neurotic. Racism and racist tropes are normalized and rendered mainstream. And it is times like these that leaders like Trump take centre-stage and power. This was prophesied by American analytical philosopher Richard Rorty in his book Achieving Our Country (1998). It is no surprise therefore that “old” racism is revived and back.