Among those killed in Gaza were Dunyana al-Amour, 23, a student of fine arts at Al-Aqsa University, and 5-year-old Alaa’ Qaddoum. 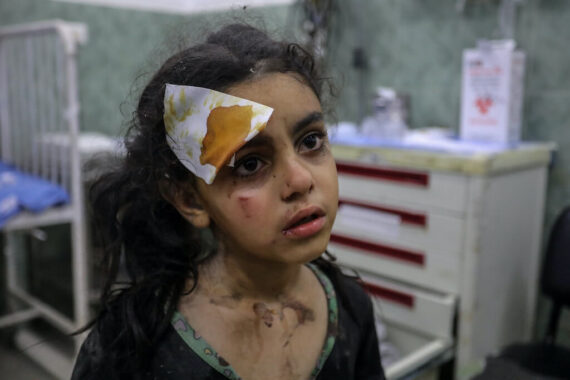 An injured Palestinian is seen as she is taken to the hospital following Israeli airstrikes over Rafah, located in the southern Gaza, on August 06, 2022. Photo by Abed Rahim Khatib. Anadou Images.

On August 1, a special Israeli force broke into Jenin refugee camp in the West Bank and arrested Palestinian Islamic Jihad (PIJ) leader Bassam al-Sadi, 61. PIJ holds Israel responsible for al-Sadi’s life as footage showing the moment of his arrest revealed that the special unit which arrested him used physical violence, including dragging his body.

His family said in a press release organized by PIJ at his family’s house in Jenin refugee camp on August 2 that they found marks of his blood and Israeli bullets 200 meters from the location of his arrest.

Al-Sadi is one of the most prominent PIJ political leaders in the West Bank. He has served 14 years in Israeli jails and was exiled to southern Lebanon in 1992 along with 415 other Hamas and PIJ members.

From Jenin to Gaza

PIJ in the Gaza Strip holds Israel responsible for al-Sadi’s life, asking Egypt, which mediated to de-escalate the situation to release him and Khalil Awawdeh, 33, a Palestinian prisoner held under administrative detention (without charge of trail) who has been on hunger strike in Israeli jails for 33 days.

Israel has accused PIJ of preparing to attack southern Israel in response to al-Sadi’s arrest, which PIJ has denied. Israel has closed all commercial crossings into the Gaza Strip, namely the Karem Abu Salem and Beit Hanoun crossings, and warned PIJ against carrying out any attack. It has also closed all roads leading to Gaza and asked Israelis to use bypass roads to move around as hundreds of Israelis started moving towards the north fearing an imminent escalation with Gaza.

On August 5, Israel launched a series of airstrikes targeting PIJ in the Gaza Strip. Until August 7 (9:30 am), the Israeli airstrikes had killed 30 Palestinians and injured 265 others. Among those targeted was Tayseer al-Jabari, 50, the military commander of Islamic Jihad’s Al-Quds Brigades in the Northern Governate of the Gaza Strip.

Khaed Mansour, one of the top commanders of Al-Quds brigades and its Southern Brigade commander was also killed in an Israeli airstrike in Rafah on August 6, 2022. Among those killed in Gaza were Dunyana al-Amour, 23, a student of fine arts at Al-Aqsa University, and 5-year-old Alaa’ Qaddoum. Both were killed in a drone strike that hit a residential building in Gaza where al-Jabari lived.

The PIJ has responded with launching hundreds of locally made projectiles into Israel, injuring eight Israelis. Israel said its Iron Dome system has managed to intercept 33 missiles, while dozens of other projectiles made it into southern Israel.

In a joint statement, Israeli Prime Minister Yair Lapid and Defense Minister Benny Gantz, said, “The security forces will act against Islamic Jihad terrorists to eliminate the threat they pose to the citizens of Israel.”

Palestinian Islamic Jihad said in a statement on Friday, August 5, that “we collectively must defend ourselves and our people. We will not allow the enemy’s policy of undermining the resistance and our national perseverance.”

Israel said that its military operation in the Gaza Strip targets PIJ only, in the hope of keeping Hamas away from the fighting. But the group said in a statement on August 5 that “the blood of our people and the resistance are not shed in vain.”

The current Israeli escalation reminds Palestinians of the May 2021 escalation, which lasted 11 days and claimed the lives of 257 Palestinians and 10 Israelis. Palestinians are yet to recover from last year’s attacks which left behind massive destruction of infrastructure.