Gambia became the first nation to bring charges of genocide against another state to the International Court of Justice, setting a new precedent in moral leadership, foreign policy, and the protection of human rights. 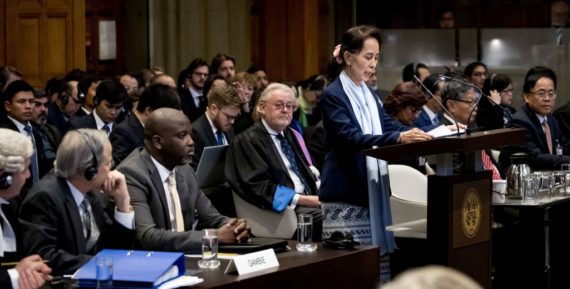 Myanmar's State Counsellor Aung San Suu Kyi (C) stands before the UN's International Court of Justice on December 11, 2019 next to Abubacarr Tambadou (3L), minister of justice of the Gambia, in the Peace Palace of The Hague, on the second day of her hearing on the Rohingya genocide case. Photo by Koen Van Weel/ANP/AFP via Getty Images

Once again the global community’s attention was turned to the International Court of Justice (ICJ) in The Hague, the Netherlands. On Tuesday, the 10th and Wednesday 11th December, lawyers and legal experts representing Gambia and Myanmar made their presentations before the court with varying degrees of persuasion. Gambia, with the support of the members of the Organisation of Islamic Cooperation filed a case before the ICJ alleging that the Myanmar’s military, the Tatmadaw, committed acts of genocide against the Rohingya. While the final ruling on the case can take some time, hearings related to Gambia’s request for provisional measures for the immediate protection of the Rohingya people were heard.

In attendance was Aung San Suu Kyi, Myanmar’s once highly esteemed civilian leader and Nobel Peace Prize laureate, Aung San Suu Kyi has more recently been the recipient of global condemnation for her silence and complicity in the Rohingya persecutions and was now, in a twist many would not imagined, fronting the court to defend her country’s horrendous actions. Indeed, when the Gambia, a tiny West African nation took Myanmar to the ICJ on November 11, on charges of genocide against the Rohingya community, humanity at large was ethically and morally “absolved” of its inaction. Gambia’s moral foreign policy and sense of duty to the continuing suffering of the Rohingya ought to be commended and reverberate a globally as a warning against regimes that torture, massacre and maim their citizens at will.

The Rohingya, a minority ethnic group from Myanmar’s North-Western Rakhine state, and the nation’s only overwhelmingly Muslim community has faced a sporadic military suppression for years. However, in 2017 the world witnessed a coordinated and large-scale persecution and of the Rohingya from Rakhine state. Consequently, since 25 August 2017, approximately 742,000, fled to neighbouring Bangladesh seeking refuge.

Despite the censorship and cover up of Myanmar’s military regime, testimonies from survivors painted a horrific picture of what happened during the military crackdowns. Narratives of pain, trauma and anguish have been documented among Rohingya refugees in Bangladesh. In their report Forced Migration of Rohingya: The Untold Experience (2018) the Ontario International Development Agency (OIDA) noted how nearly 24,000 Rohingya were killed by the military, 34,000 thrown and burnt in fires by vigilante groups aided by the military, and of the despicable mass gang rapes of Rohingya women and girls.

In addition to the genocide, a comprehensive ethnocide against the Rohingya was carried out, with mosques and other cultural sites razed and destroyed by vigilante youths led by extremist Buddhist monks. In his book Myanmar’s Enemy Within: Buddhist Violence and the Making of a Muslim Other (2017) Francis Wade illustrates how Buddhist nationalism coupled with Islamophobic rhetoric borrowed from India’s Hindu-Nationalists and far-right movements in the West fuelled and exacerbated the continuing persecution of the Rohingya in Myanmar.

The Rohingya have been massacred en-masse, their homes destroyed, and their history and material culture erased from Rakhine state, those in Bangladeshi refugee camps have been rendered stateless, while the few who remain in Myanmar live under an apartheid style regime.

Humanity is on trial at the ICJ

Never has a nation brought charges of genocide against another nation to the ICJ. Gambia’s effort to seek accountability and ultimately redress for the persecution of the Rohingya in Myanmar set a new precedent in foreign policy, the moral leadership of nation states, and for global justice against the worst human rights violations.

The plight facing the Rohingya has been catastrophic. The violence and persecution by the Myanmar military and the resulting humanitarian crisis that it occasioned did not receive equal global outrage and immediate action. Hence, it is understandable that many are praising and appreciating Gambia’s legal initiative at the ICJ – a defence which is long overdue. In their presentations before the court, lawyers for Gambia laid out documented details of  “mass shootings, throat slitting, infanticide, torture, rape and burning down of villages, carried out systematically and together amounting to the destruction of the Rohingya as a group, in whole or part”. This was excruciating evidence presented before the court as many watched online and across social media platforms globally.

Despite this, Aung San Suu Kyi’s defence was one of total denial, with her presence at The Hague eliciting widespread criticism and daily protests outside the court. Interestingly, throughout her speech before the court, Aung San Suu Kyi decidedly avoided to use the term “Rohingya”. Indeed this is a reflection of Myanmar’s state policy: one predicated on denial and the non-recognition of Rohingya persecution, suffering and even their very identity and citizenship of  Myanmar.

To be clear, the trial of genocide at the ICJ will not immediately lessen the Rohingya’s plight and suffering in Myanmar, and in those in refugee camps; but it sends a clear message to the military regime: the world will hold them accountable for their actions now and in the future. What the Rohingya will need is comprehensive and long-term humanitarian support that will rebuild and stabilize their livelihoods, and more importantly, the political will which will one day enable them to return to a safe and secure homeland in Rakhine state.