Comparing the AfD to the Nazi times, Charlotte Knobloch stated that the AfD “bases it politics on hate and exclusion and doesn’t abide by our democratic constitution.” 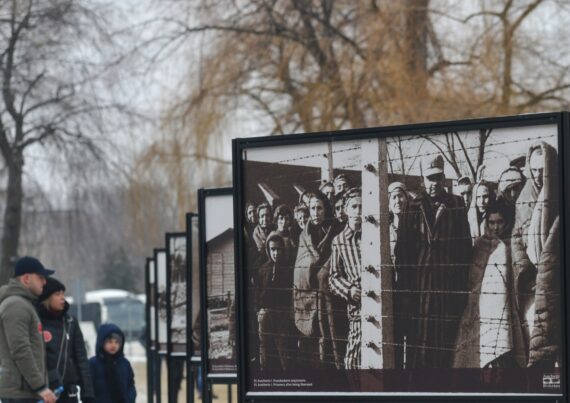 Visitors outside Auschwitz I entrance. Hundreds of visitors arrives to Auschwitz, a German Nazi concentration and extermination camp, just two days ahead of the 74th anniversary of the camp liberation. Getty Images

Charlotte Knobloch, former president of the Central Council of Jews in Germany, recently gave a speech in the Bavarian Parliament in Munich to commemorate the Holocaust victims – a remembrance of 6 million Jews persecuted by the Nazis in Germany from 1941-1945. During her speech, Knobloch accused the anti-immigrant and far-right Alternative for Germany (AfD) for playing down Nazi crimes.

It can be stated that the accusation is actually justifiable due to various and obvious AfD-triggered incidents. For instance, when AfD co-chair Alexander Gauland stated that Hitler and the Nazis “are just bird shit in 1,000 years of successful German history,” many German politicians from other parties rebuked him for his stance. In the past, other AfD personalities made some controversial statements such as defaming the famous memorial of Holocaust victims in Berlin by describing it as a “memorial of shame.”

As a consequence of this recent speech, the AfD group left the assembly, accusing Charlotte Knobloch of abusing a memorial service to defame the entire AfD and its legitimate and democratically elected faction, using an evil blanket of insinuations.

Are Hitler and the Nazis “just bird shit in 1,000 years of successful German history” as AfD co-chair Alexander Gauland stated?

Well, when one looks at Knobloch’s statements, one notices that she has just reminded the audience by indirectly pointing to previous stances of the AfD, which have become public both in German states and of course on the national level. Knobloch explicitly stated, “A party is represented here today that disparages those (democratic) values and downplays the crimes of the National Socialists,” while adding that the AfD “bases it politics on hate and exclusion and doesn’t abide by our democratic constitution.” All other center-left, center-right, green and left party legislators applauded Knobloch’s criticism in agreement of her statements concerning the AfD.

Comparing the AfD to the Nazi times, Charlotte Knobloch stated that the AfD “bases it politics on hate and exclusion and doesn’t abide by our democratic constitution.”

The 86-year-old Ms. Knobloch, who spoke ahead of the International Holocaust Remembrance Day, is a survivor of the Second World War and is a person who knows what she is talking about. During those times, she was hiding in the countryside of the south-east German state, Bavaria; where she also currently lives and leads the local Jewish community.

Following the recent incident in the Bavarian parliament, it became clear that the former president of the Central Council of Jews in Germany subsequently received “coarse verbal abuse, threats and insults by email and telephone almost by the minute.” One has to take into consideration that this can easily happen to a person in 2019, who is also a survivor of the Holocaust and a symbolic name for the German Jewish community. It seems that even such fundamental details of a personality do not deter German fascists and contemporary Nazis from attacking MS. Knobloch. Unfortunately, this shows that while on the one hand there is actual danger posed by AfD supporters, on the other, it also illustrates that they have some strange courage. Where this courage comes from needs to be clarified? Does it derive from German institutions, or police, or the judiciary? Or, is this “self-confidence,” just based on an increasing move towards a far-right political landscape? Despite this, it’s no doubt clear that there is a huge problem that needs to be solved immediately before it gets out of control.

Charlotte Knobloch is a survivor of the Holocaust and a symbolic name for the German Jewish community. Yet this was not enough to deter German fascists from attacking her.

In the recent past, Knobloch has also been the person indirectly rejecting manipulation efforts of German media outlets, which aimed to display and alleged increase of antisemitism due to the flow of Muslim refugees to Germany. In this sense, she once stressed that “We (Germany) don’t have an anti-Semitism problem because people from other cultures are coming to us.” Despite systematic manipulation efforts by populist media outlets, federal statistics and studies show that in the last year, antisemitism –together with anti-Muslim actions– increased, particularly among far-right circles. However, as addressed in previous columns, a certain mentality among the German media landscape tries to emphasize a false perception, dis-regarding the facts.

Thus, it has to be stressed that not only far-right positions, but open Nazism-sympathetic behavior is still a fundamental problem in Germany. Under these conditions, citizens have to be sensitive, in particular against antisemitism, but also against increasing anti-Muslim stances. Not only certain and symbolic remembrance days, but continuing programs and mind-changing approaches ought to be implemented. As Ms. Knobloch also once stated, the fact that most of the WWII survivors nowadays passed away causes a situation in which the memory regarding Nazi crimes is fading – however this must not happen. And for this, first of all, the united stance of democrats in Germany against all, who downplay crimes and criminals, have to be reinforced.