According to Cologne police, rallies by PKK-affiliated organization NAV-DEM scheduled for today (Thursday) in Cologne and Leverkusen were forbidden due to repeated violations of the law and crimes committed by members of the group in recent weeks. 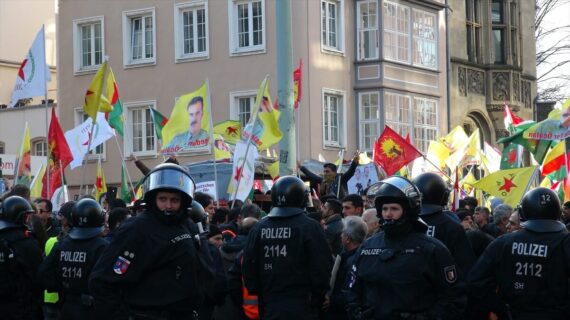 According to Cologne police, rallies by PKK-affiliated organization NAV-DEM scheduled for today (Thursday) in Cologne and Leverkusen were forbidden due to repeated violations of the law and crimes committed by members of the group in recent weeks.

PKK/PYD supporters in Germany launched a campaign last month against Turkey’s ongoing counterterrorism operation in northern Syria and held demonstrations across the country in which they carried banned flags and posters of the PKK terrorist group.

In a press release Wednesday, Cologne police recalled that the PKK has been listed as a terrorist organization in Germany and said it would not allow NAV-DEM’s demonstrations planned for Thursday as members of the group were likely to again carry outlawed symbols of the terrorist group.

The PKK has been banned in Germany since 1993 but is still active with nearly 14,000 followers among the country’s Kurdish immigrant population, according to the country’s domestic intelligence agency BfV.

Supporters of the PKK and its Syrian branch PYD have organized radical and violent protests across Germany since Jan. 20, when Turkey began a military operation against terrorist targets of the PKK/PYD in northwestern Syria.

Turkey has stressed that Operation Olive Branch is being conducted within the framework of Turkey’s sovereign rights based on international law, UN Security Council resolutions and self-defense rights under the UN Charter.

The PKK, which is listed as a terrorist organization by Turkey, the U.S. and the EU, waged a terror campaign against Turkey for more than 30 years, killing nearly 40,000 people.

Also Read
US Support to YPG: Violation of US National Law
We use cookies to optimize your online user experience. To learn about our use of cookies and how you can manage your cookie settings, please see our Privacy Policy. By continuing to use our site you are excepting our use of cookies.Accept Cookies & CloseMore Info