New and more global responsibility seeking German self-perception cannot be reduced to one specific political party, but rather a long-term state policy. 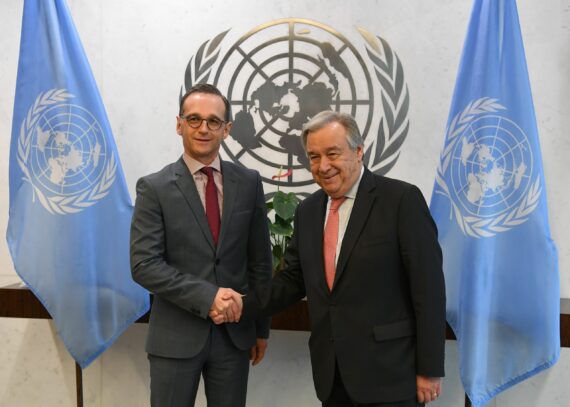 Last week, German Foreign Minister (SPD) Heiko Maas first visited Israel, where he engaged in fixing out current Germany-Israel relations, and subsequently the United Nations in New York, for promoting Germany’s candidacy for a non-permanent seat on the United Nations Security Council (UNSC) for the 2019-2020 term. The UN’s highest council consists of 5 permanent members, which are the U.S., Russia, China, France and Great Britain and 10 non-permanent members elected by the UN General Assembly for two year terms. The next non-permanent members will be elected on June 8, and Germany will compete against Belgium and Israel for one of two open seats in the group of Western Europe.

In contrast to previous Foreign Minister Gabriel, Maas did not address controversial issues during his trip such as Israel’s illegal settlement policy or the unilateral recognition of Jerusalem as Israel’s capital – even though German politicians were not shy to address these topics a couple of months ago. Ultimately, besides diplomatic gestures and balancing acts, Maas preferred not to mention current conflicts.

A couple of days later he visited New York to promote his country’s candidacy for a non-permanent seat on the UNSC. According to Maas, “Germany is ready and willing to shoulder greater responsibility.” It’s obvious that this approach has ultimately been a general trend of German foreign policy discourse for some time. Given the current transatlantic challenges since the Trump administration, it’s not the first time that a high-profile German politician stressed a so-called greater role and “responsibility” of Germany in global politics. Just to remember, during a speech in December 2017, former Foreign Minister Gabriel had stated that Germany is required to defend her own interests more self-confidently and that she has to take a more active role in global politics.

In May 2017, CDU leader and Chancellor Merkel had also argued that Germany needs a foreign policy less dependent on the U.S. Furthermore, the former non-partisan German President Gauck, former Foreign Minister from the SPD (and current President) Steinmeier and Defense Minister von der Leyen (CDU) also called for a more active Germany in world politics at the 2014 Munich Security Conference. Hence, from Germany’s point of view, a new non-permanent membership on the UNSC could be a convenient instrument for extending those ambitions.

However, while Germany aims to become a non-permanent member of the UNSC, Israel also does the same – though with one difference. While Germany was on the UNSC six times, last in the 2011/2012 term, Israel has never been on the council since 1948. Consequently, Israeli voices asked Germany to step aside for its “partner.” Some opinions even accuse Germany’s candidacy as “a shameless, clueless, cynical power play against the Jewish state.”

Germany though rejects these kinds of criticisms and any other potential deal. Even though Maas stressed, “Germany is not running against anyone; but for a seat,” it seems quite obvious that the Foreign Minister made some tactical moves during his Israel trip. Namely, in the form of not mentioning conflictual issues by expecting to prevent a possible public dispute focusing on both countries’ UNSC seat application.

Germany though rejects these kinds of criticisms and any other potential deal. Even though Maas stressed that “Germany is not running against anyone; but for a seat,” it seems quite obvious that the Foreign Minister made some tactical moves during his Israel trip. Namely, in the form of not mentioning bilateral conflict issues by expecting to prevent a possible public dispute focusing on both countries’ UNSC seat application.

It seems that Germany considers underscoring its current “active foreign policy” discourse through a UNSC seat. It’s obvious that this new and more global responsibility seeking German self-perception cannot be reduced to one specific political party, but rather a long-term state policy. As one of the major worldwide donors to the UN’s budget, Germany is currently closer for a new non-permanent UNSC membership than Israel. Arguments from pro-Israeli circles that seem surprised by Germany’s candidacy will most likely fail to convince Germans and the global audience. In addition, Germany wants to persuade the global audience by stressing its military engagement in various countries under the umbrella of NATO and the UN – despite the fact that the German army is currently insufficiently equipped.

The idea that this likely new term will help Germany to “be involved in tackling the biggest challenges to peace and security” is actually an exaggerated expectation. While it would be interesting, we are unlikely to witness a Germany that demands extending the veto right for new members at the UNSC, as had been the case in 2004 by the former German chancellor at that time.

Also Read
Farha Is A New Milestone for Palestinian Cinema