All democratic political parties that openly reject the AfD’s position must recognize the importance of giving symbolic responses to reject their ideology. 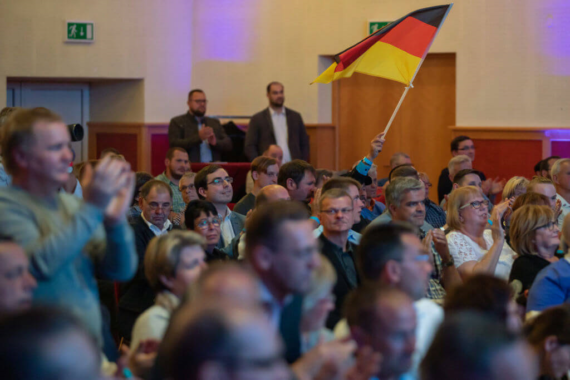 A German flag shown at the beginning of the election campaign of the AfD Thuringia. 18 September 2019, Thuringia, Arnstad, Getty Images

In a recent report published by the German public broadcaster ARD’s Mainz Report program it was revealed that Germany’s main conservative party, the Christian Democrat Union (CDU), and the far-right Alternative for Germany (AfD), had established alliances in 18 towns at the municipal level.

Although the CDU officially prohibits cooperation or establishing alliances with the AfD at both the local and federal levels, it seems that there is a significant disconnect between the federal CDU leadership and their local representatives. The CDU has reiterated its official position of not cooperating with the AfD while stressing that all CDU affiliated members who have been found to disregard this ban will suffer consequences in accordance with the party’s rules.

Besides the actual measures and consequences, and whether or not they will be applied any time, the cooperation between the CDU and AfD in the local districts of  Saxony, Thuringia and Saxony-Anhalt, underpin the already existing concerns with regard to the increasing radicalization of center-right politics, that is to say, the increasing normalization of the far-right.

The Mainz Report story also received attention due to an incident which became publicised a few days prior, in which a member of the neo-Nazi party NPD was elected to a city council in the state of Hessen though the support of the CDU and even the Social Democrats (SPD).

Following the report’s revelations, local CDU and AfD groups in the council of Eisleben ended their cooperation, which they had previously agreed to do if it became public. Interestingly, local representatives from both parties did not appear bothered by the incident and instead indirectly criticized the media’s report–which is rather concerning on the part of the CDU.

If they are serious about resisting the far-right in Germany, the CDU must sanction members who cooperated with the AfD.

But how should we understand this issue although the recent cases are, at least at the moment, restricted to the municipal levels? Are concerns that the cooperation between the CDU and AfD might expand in future to higher levels really legitimate?

Of course, the main question is why such alliances emerged in the first place, and more specifically in the towns of East Germany. One of the main factors is the AfD’s recent electoral successes in the eastern states of Saxony and Brandenburg. Even though the party did not win both elections, they were very successful in increasing their votes, greatly harming the traditional center-left and center-right parties. In addition to this, ongoing intra-party difficulties within the CDU and SPD in the past two years have irritated and alienated German voters from center parties, creating a mood in which the far-right has found room to become more normalised among both German politicians and citizens.

With this, a further important question arises, namely, what kind of impacts might be caused in the long-term by this cooperation, and can further cooperation can be prevented in the future? Unfortunately, it is generally the case that conditions at the local levels are initially “tested” by political parties before actions are transferred to the federal level. Therefore, parties who are serious about challenging the rise of the far-right must stand firm against these alliances and take action against those who break the rules, or similar behaviour may occur yet again.

In all such cases the initial stance of the party leadership is extremely important, and all democratic political parties that openly reject the AfD’s position must recognize the importance of giving symbolic responses to reject their ideology. The current political mood and the quasi-normalization of such cooperative steps or even alliances will most likely have a direct impact on the state elections scheduled for the end of October in Thuringia – another eastern German state where far-right tendencies are growing. Political parties have to take serious action and distance themselves very clearly from the AfD. They must initiate concrete steps in a collective way against the AfD and all other far-right groups. This should be done by simultaneously taking into serious consideration the legitimate and reasonable concerns of voters that may have led them to the far-right in the first place. This will most likely be a very difficult process and will require a careful and balanced response, though no one promised politicians that a political career will be that easy.