There is a newspaper, published in Frankfurt and sold along with Frankfurter Allgemeine, Le Monde, Le Figaro, El Pais and The Guardian at kiosks in Europe: Yeni Özgür Politika (New Free Policy). It's published in Turkish and this year the newspaper celebrates its 11th anniversary. However, the newspaper deems those who don't support the PKK or criticize the terrorist organization as "collaborators", "threatening", "killing" and headlining that they were "punished" which "intimidates the rest" are considered as a part of the freedom of expression and thought in Germany. 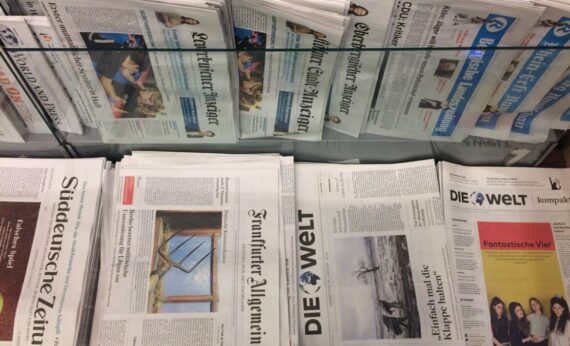 There is a newspaper, published in Frankfurt and sold along with Frankfurter Allgemeine, Le Monde, Le Figaro, El Pais and The Guardian at kiosks in Europe: Yeni Özgür Politika (New Free Policy). It’s published in Turkish and this year the newspaper celebrates its 11th anniversary. Distribution of this newspaper and access to its website is prohibited in Turkey; nevertheless, the headlines of the newspaper and its first page can be accessed through Twitter. For this reason, I was able to examine their publications in a tweet recently. The news was about the murder of two Justice and Development Party (AK Party) politicians who were killed in Lice and it was intriguing. Dated July 3 2017, an article entitled “two collaborators killed,” and published on the right corner of the first page reads:

Deeming those who aren’t pro-PKK or pro-Peoples’ Democratic Party (HDP) as collaborators and emphasizing that they were “warned” numerous times, the newspaper, in short, implied that they were “punished”. However, this isn’t all; it carries another important message: “All those who have been warned and will be warned, watch your step.”

After this finding, I started to investigate their past news and various first pages of the newspaper through Twitter. The AK Party is the most significant – and the sole rival – of the pro-PKK/HDP in politics. A day after the aforementioned news, they headlined another announcement on the issue of July 4 2017:

“We won’t leave any collaborators alive in Kurdistan!” If you’re about to ask whom they are not going to let live, it is also stated in the news: “HPG, YJA STAR, YPS/YPS-JİN”. Moreover, they explained what happened in the text:

“YPG Jin and HPG carried out the killing of collaborators Orhan Mercan and Aydın Ahi who worked against the people of Kurdistan. It was stated that it will become a part of the war and that all collaborators will pay. YPS Coordination announced that AKP Lice Branch Deputy Chairman Mercan was punished by the Marty Berfin Vengeance Team.“

While the newspaper tends to characterize the PKK’s targets as “collaborators”, sometimes targets’ political parties, names and surnames are openly written. For instance, in an article which was published on September 9 2015, there is a sentence about AK Party’s Kurdish MPs:

“Those miscreants like AKP MPs Orhan Miroğlu, Muhsin Kızılkaya and Galip Ensarioğlu who call themselves Kurds will be known in history as the greatest traitors.“

The Assassination of Tahir Elçi

The same article also criticized the late Diyarbakır Bar President Tahir Elçi, even though he wasn’t a member of the AK Party. Indeed, Elçi had criticized and disapproved the act of digging trenches for armed conflict in city centers and districts, especially in the Sur District of Diyarbakır. An author of the newspaper writes the following:

“Amed (Kurdish name for Diyarbakır) Bar President sees its own people’s decision for autonomy as disrupting the public order. Him saying ‘army and police force might interfere with the proclamation of autonomy. We want no one to die during this process’ legitimizes attacks.”

The newspaper not using Elçi’s name and repeating the phrase “Amed Bar President” in this long article that I’m not able to share as a whole is intriguing. Elçi’s statement that “the security forces will interfere as a result of the PKK declaring war and digging trenches within city centers” and that “it will lead to deaths of people” was enough for him to be targeted.

Two and a half months later, Tahir Elçi was shot to death on November 28 2015 while making a statement with a group of lawyers in front of a historical mosque in Sur. Ahmet Çiftaslan and Cengiz Erdur, two of three police who were wounded during the attack, died at the hospital. Meanwhile, Anadolu Agency reporter Aziz Aslan was also wounded.

After Elçi’s death, New Free Policy adopted a new discourse. They started to praise Elçi, while alleging that he never saw the PKK as a terrorist organization and that he was killed by the state.

At the end of May, 13 military personnel were killed in a helicopter crash in Şırnak. While it was assumed that it was an accident, HPG asserted that it had carried out this attack. This news was headlined in New Free Policy in the following way:

Germany, the PKK, and the Cloud over the Freedom of Expression

These are some of the instances that could be reached through a quick scan. It is possible to find more via a thorough research. One doesn’t have to be a scholar to say that praising the terrorist attacks of the PKK and various other subgroups and that intimidating people through these terrorist acts have nothing to do with freedom of expression and thought. Indeed, even the PKK knows this well. They aren’t making the newspaper write these kinds of headlines just because they don’t know or they can’t control themselves; they are definitely aware that such publications are possible and allowed in Europe, especially in Germany.

The PKK is a terrorist organization that abuses legal and illegal means to their fullest extent through its affiliates. The newspaper also includes stories that read “the legal decision in Turkey will be appealed and the case will be carried to a higher court”, along with literature and art news! The newspaper simultaneously threatens its targets and conducts traditional media business. If this provides legitimacy to the newspaper, Daesh is doing the same. They also threaten and intimidate and publish the photographs of people they slaughter; on the other hand, they talk about subjects like social aid and ecology which are accompanied by a photograph of kids playing ball. With a slight difference that Daesh’s newspaper isn’t being sold at European kiosks!

In fact, the predecessor of New Free Policy, the Free Policy daily was banned in Germany. The reason behind the ban of the newspaper, which was established in 1995 and published by E. Xani (Ehmede Hani) Presse und Verlags GmbH publishing house, by the Federal Ministry of the Interior in 2005 was its organic relations with the PKK. According to the articles about this incident that can be accessed online, Federal Minister of the Interior Otto Schilly said the following: “Published in Turkish in Europe, Free Policy is an affiliate of the PKK and it’s possible to demonstrate it. Despite changing its name to Kongra-Gel, they still have the same aims. Free Policy, in this matter, informs the PKK supporters and disseminates the commands of the PKK administration through its publications.

Freedom of press is of the utmost importance to Germany; however, this freedom can never supersede Germany’s interests in security.” Moreover, in his statement, Schilly also said “at a time of escalating conflicts in Turkey, I’m not in favor of showing tolerance to the PKK propagating its own discourse in Germany, despite its being prohibited.” However, this decision taken by the Federal Ministry of the Interior in August was nullified by the Federal Administrative Court in Leipzig in October. After the court decision, the former Free Policy partially changed its name to New Free Policy and become a part of the German media.

Acts like deeming those who don’t support the PKK and criticize the terrorist organization as “collaborators”, “threatening”, “killing” and headlining that they were “punished” which “intimidates the rest” are considered as a part of the freedom of expression and thought in Germany. As Free New Policy is sold in every kiosk in all European capitals without any problem, it seems that this is becoming a new European standard for the EU as a whole.

You might ask what is surprising about all of this. One of the two founding members of the EU, Germany has embraced putschist military officers, who, during the coup attempt, bombed the parliament and fired on people on July 15 by approving their asylum requests. On the other hand, the coalition government of Greece led by Alexis Tsipras’ leftist political party Syriza has also done the same… Athens is now the home of putschists who flee Turkey. This is the portrait of democracy and the state of law in the Old Continent and New Greece.