Germany needs to start an actual struggle against all potential PKK components flourished in Germany once and for all. 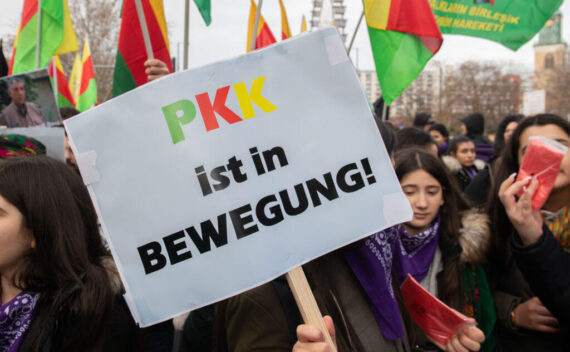 Participants stand in front of the Red City Hall and take part in the demonstration of Kurdish groups to ban the PKK for 25 years, December 1, 2018, Berlin. Getty Images

As one may remember, in early 2017, German authorities took a decision to expand the ban on PKK-related symbols and flags – a ban in place since 1993. This expansion did not achieve the expected effect due to the ambivalent efforts of the authorities and the continuing tolerance of PKK/YPG/Ocalan flags. Nevertheless, this symbolic step of the federal authorities is still welcomed.

In a similar effort, last week, German federal authorities banned two “media” organizations in Germany, which had links to the PKK terrorist organization. The accusation of the interior ministry was that money earned through these organizations was sent exclusively to the PKK abroad, which also strengthened the group’s capabilities on German soil. The names of these organizations are Mesopotamia Publishing House and MIR Multimedia and they are located in the western states of North Rhine-Westphalia and Lower Saxony.

With regard to the recent ban, the former leader of the ultra-conservative Bavarian Christian Social Union (CSU) and the current Minister of the Interior, Horst Seehofer stated that “as the PKK is still active despite being banned in Germany, it is necessary to rein in the PKK and uphold our legal system.” On the other hand, the PKK-friendly Leftist Party opposed this step while in particular Turkish politicians both from and outside Germany, and even some German politicians openly welcomed the government’s stance against the PKK.

According to the official statement of the ministry, there are around 14.500 PKK supporters in Germany that can be counted as the biggest group among foreign terror groups.

According to the statement by the ministry, there are around 14.500 PKK supporters in Germany that can be counted as the biggest group among foreign terror groups. Moreover, the ministry stressed that the PKK-affiliated organizations had been banned since 1993 while more than 90 people have been sentenced by the German judiciary for their links to the PKK.

Under these circumstances, though, the question arises as to why German authorities nowadays have intensified their steps against the PKK and other affiliated groups in Germany. The question is very crucial due to Germany’s known ambivalent stance against the overall PKK danger. For instance, it seems that while on the one hand Germany initiates a harder handling against PKK supporters or PKK-affiliated groups, on the other hand it also supports the PKK’s Syrian branch, the YPG, just like the U.S. does. Thus, why is Germany taking such a step under these continuing facts?

Germany initiates a harder handling against PKK supporters and PKK-affiliated groups internally, but externally it supports the YPG, the Syrian branch of the PKK.

First of all, one has to address some current developments in Germany that shape the general mood in the country. Besides the unfortunately increasing antisemitism among Germans –in particular among Germans without a migration background– Germany is disregarding and not facing the country’s problem with the far-right, xenophobia and increasing anti-Muslim, anti-Turkish actions.

Recently, three young Syrian girls were targeted in apparent xenophobic attacks in Berlin, while there has not been any outrage by mainstream media platforms or even politicians. Thus, it seems likely that under these circumstances federal authorities are willing to take some superficial steps against a Marxist-Leninist based terrorist group, the PKK, in order to distract attentions. For this, some symbolic steps might cause a good image in the eyes of particularly Turkish people in Germany. It does not seem very honest that an officially recognized foreign terror group in Germany, which although has not been around for over 30 years has continued its bloody terror campaigns since 1984 against a NATO ally Turkey, is only nowadays becoming a focused problem. This does not seem very sincere.

Of course, the second likely reason as to why German has intensified its position rather than starting an actual struggle against the PKK might have something to do with the recovery of bilateral relations between Turkey and Germany. In such a positive mood, Germany might initiate some harder steps against an organization, which has been recognized as a terrorist organization since 1993. However, on the other hand, despite Turkey’s continuing heavy pressures, Germany still does not accept the fact that FETO (Fetullah Terrorist Organization) poses a security threat.

PKK is a security threat for Germany. There are German citizens who are ethnic Kurds, and who are unfortunately seen as a source of recruitment for the PKK’s terrorist campaigns.

The third point though might have a direct relation with the ambiguities of the current U.S. administration, which nowadays elaborates to cancel its support for the PKK’s Syrian branch. Of course, despite Donald Trump’s proposal to withdraw American troops from Syria and simultaneously stop supporting the YPG, U.S. security institutions are continuously making efforts to change this ambition. It is likely that German policy makers and advisors, or even think-tanks, have begun to re-consider and update their position with regard to the PKK/YPG.

Finally, one must not ignore that the PKK terrorist organization is a security threat for Germany. There are German citizens with ethnically Kurdish background, who are unfortunately seen as a source of recruitment for the PKK’s terrorist campaigns. It’s also undeniable that the PKK receives immense financial support from its supporters in Germany. From this point of view, it would not be wrong to state that Germany needs to start an actual struggle against all potential PKK components flourished in Germany once and for all.