At the end of the day, the move by the CDU leader will most likely not contribute positively towards her ambitions of becoming Germany’s next chancellor in 2021. 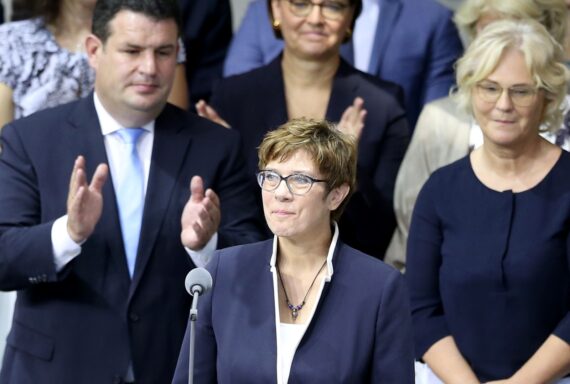 Germany's new Defence Minister Annegret Kramp-Karrenbauer (Front C) is applauded after taking her oath during her swearing in ceremony on July 24, 2019. AA

Last Monday, Germany’s Defense Minister and Chairperson of the Christian Democrats (CDU), Annegret Kramp-Karrenbauer (AKK), surprisingly raised a proposal for an internationally controlled safe zone in northern Syria. AKK who is currently Chancellor Merkel’s preferred successor, stated that Germany “cannot just stand by and watch and not do anything” about Syria, while outlining her safe zone suggestion, one that which would be internationally controlled and involve Turkey and Russia.

Following her statements, the question arose as to whether she had shared this idea with her coalition partners, and above all, with the actual office responsible for foreign issues, namely, Germany’s Federal Foreign Office and its Social Democrat (SPD) foreign minister, Heiko Maas.

However, it became clear that neither the SPD nor the junior coalition partner, the Christian Social Union (CSU) and its leader Markus Söder, were informed about AKK’s ambitious proposal. Consequently, a dispute occurred behind closed doors between the coalition partners, and the proposal as well as the possible deployment of German troops to northern Syria was severely contested.

The foreign minister’s initial comments also revealed the uncomfortable mood among the coalition members. Maas stated publicly that there were some unanswered questions and that Germany had received skepticism from its EU allies. He added that there was no current discussion among partners to create such an international safe zone, and criticized the time and style in which the proposal was made.

Despite similar irritation and silent criticism by other SPD members, it seems that CDU officials instead supported the defense minister in a quasi-obligatory way, while opposition parties criticized AKK’s proposal. For instance, the Left Party called the proposal “ridiculous”, while the Greens stated that the proposal raised more questions than answers. Interestingly, the former SPD chairman and foreign minister, Sigmar Gabriel, welcomed AKK’s proposal on its content.

Neither the SPD nor the junior coalition partner, the Christian Social Union (CSU) were informed about AKK’s ambitious proposal.

In the following days, though, AKK accused Turkey of annexing parts of northern Syria which consequently caused a backlash even from the German public. Thus, some opposition members harshly criticized the defense minister for spreading “false information” while others described her as “incompetent on such issues”. AKK’s usage of the term “annexation” showed her lack of knowledge regarding military issues. It is generally accepted that there is no intention of a permanent integration of northern Syria into Turkey, which makes AKK’s assertion even more unacceptable.

One day following her public proposal, AKK did not receive the hoped for support from other NATO defense ministers. Furthermore, this recent weekend, Foreign Minister Maas made a surprise visit to Ankara, where he indirectly criticized his colleague’s safe zone proposal. When he was asked about the unclear plan, Maas answered “we were told it was not realistic. Therefore, we prioritized issues that are more important for us at the moment.”

Given the current circumstances; how should we comment on these recent events? It is quite interesting to observe that AKK is preferring to use language which stresses that the situation in Syria is massively compromising the security interests of Germany and Europe. She also criticized both actors for acting too much like “onlookers” and argued that only “a political initiative from Germany for a European advance through NATO makes sense.” But what may be AKK’s main purpose and interest in proposing such an unrealistic step, one which even the German Foreign Minister had to dismiss during his recent visit in Ankara?

Actually, it is no doubt a risky step that aimed to increase her political importance and public popularity, which has been gradually decreasing over the past couple of months. In addition, the recent blow in the Thuringia state elections has also been related to AKK’s performance as the CDU chairperson.

Therefore, as the potential future German chancellor, AKK most likely made a move to achieve a success story on an international platform. This, however, did not receive that much support and even deteriorated the intra-coalition relations, as Maas had stressed during his short-planned visit to Ankara, in which Maas made it clear that Germany’s foreign policy was not determined by the CDU leader and defense minister, but by his ministry. However, other CDU politicians and even opposition figures preferred to criticize Maas’ undiplomatic words that targeted (and even offended) their cabinet colleague.

At the end of the day, the move by the CDU leader will most likely not contribute positively towards her ambitions of becoming Germany’s next chancellor in 2021. Although her previous rival for chancellor, Friedrich Merz is not currently attacking her personally, he has focused attention instead on Chancellor Merkel as the main person responsible of the electoral defeat in Thuringia and other failings of the party. Importantly, Merz recently stressed that the current grand coalition could not continue until 2021.

While these were not direct criticisms of AKK, it can be surmised that such statements will ultimately affect the position of AKK herself, and the future of the coalition partnership as a whole. One which has suffered heavily due to the recent unplanned safe zone move by AKK and the undiplomatic reactions by the foreign minister abroad.