Cooperating and acting closely with France and attempting to utilize the UN Security Council presidency that will last for a month alone are factors that underpin Germany’s global importance and ambitions of being a more active global actor. 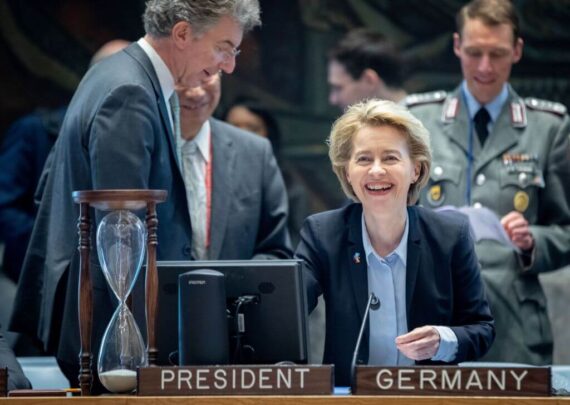 Germany became a member of the United Nations Security Council (UNSC) for the sixth time at the beginning of this year. While being a member for 2019-2020, Germany will also hold the UNSC’s presidency in April, which it took over from one of its closest partners, France, for the first time. The last time Germany acted as a non-permanent member of the UNSC had been in 2011-2012, when a CDU/CSU-FDP coalition was governing Germany and when the country faced harsh criticism by its Western allies due to abstaining from the UNSC vote on intervention in Libya (2011).

As a current non-permanent UNSC member, Germany’s main goals will be to concentrate on addressing ongoing crises and conflicts, where it will set its own priorities. By this, the country’s foreign ministry points to issues such as “women, peace and security” which “will play a key role, as will disarmament and arms control.”

Germany’s 2024 projections to increase its defense spending to 1.5% of gross domestic production will not meet NATO’s expectations of the 2% target.

During the same week that Germany took over the UNSC presidency, NATO commemorated its 70th anniversary in Washington, where alongside U.S. Vice President Mike Pence, several other think-tanks and platforms close to American lobbies criticized Germany’s unwillingness to increase its defense spending. Some commentators have even addressed a return of a so-called new “New German Question in Europe.”

In this sense, although it is known that Germany’s 2024 projections to increase its defense spending to 1.5% of gross domestic production will not meet NATO’s expectations of the 2% target, Germany has once again faced direct and indirect criticisms from various circles. But to be honest, both in Germany and abroad, expectations to meet the 1.5% target until 2024 is not perceived credible at all.

Therefore, Germany’s ambitions, particularly in the context of its UNSC membership for the next two years, will ultimately end the discourse of defense spending. However, the fact that Germany has the ambition to become a permanent UNSC member in the long run, which is unrealistic and unlikely to happen, will most likely not match the main expectations of the five permanent members of the UNC – who at the end of the day, have the power to veto any form of UNSC reform proposal.

Germany has found itself in an uncomfortable position: on the one hand, it wants to become a dominant power in global politics, but, on the other, it is constantly being criticized by the U.S. and NATO for not spending “enough” on defense.

Thus, Germany has found itself in a rather uncomfortable position, as while on the one hand it wants to become a more dominant power in global politics, on the other, it is constantly being criticized by the U.S. and NATO for not spending “enough” on defense. In order to circumvent and by-pass these accusations and challenges, Germany has been acting with France. But one should not disregard the crucial differences between these two leading EU countries. It is a fact that Germany will not become a permanent member of the UNSC in the foreseeable future and that France has been a permanent member since the establishment of the body in 1945. Moreover, while Germany has stressed its support for the Non-Proliferation Treaty, which aims to limit the global spread of nuclear weapons, there is less hope that P5 states will share similar positions.

Cooperating and acting closely with France and attempting to utilize the UNSC presidency that will last for a month alone are factors that underpin Germany’s global importance and ambitions of being a more active global actor. However, the reality – such as the false dream that Germany will become a permanent UNSC member and Germany’s unwillingness to increase its defense spending – will only cause limited local achievements.