It’s a bit strange that Germany has positioned itself within the circle of militarily powerful Western circles in the form of permanently commenting on global political and military related issues when it is not able to show any effective military capabilities. 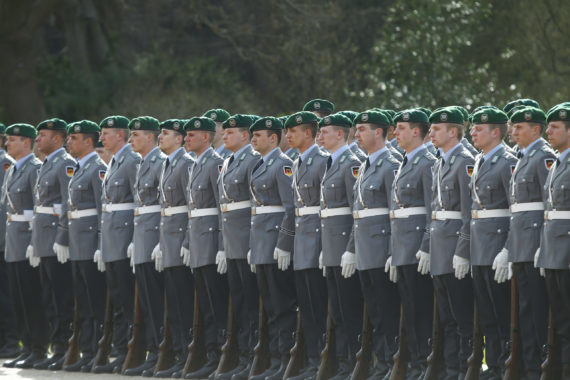 On Saturday morning, the U.S., U.K. and France launched a retaliation strike on the Syrian military due to the use of chemical weapons on civilians. Regardless of the fact as to whether the strikes fulfill military and political necessities and is in accordance with international law, it’s interesting how the German government tried to position itself by evaluating and commenting on the recent events. Prior to the airstrikes led by the Western trio, which consists of three countries possessing legalnuclear weapons and being permanent members of the UN Security Council, Chancellor Merkel excluded Germany’s active participation in the possible military action in Syria while stressing that her government supports the need “to send a clear signal that the use of chemical weapons is unacceptable.”

Following the airstrikes on Saturday morning, the Christian Democrat Chancellor said that the joint strike was “necessary and appropriate” while the country’s Social Democrat foreign minister supported the government’s stance as well. On the other hand, recent polls suggest that a majority of Germans (60 percent) don’t support the military strike.

Opposition parties also criticized the military campaign and even the government’s political support. Only the FDP rebuked Merkel’s early position by stating that it was not right to remove the possible military involvement of German military forces as an option at this point in time – maybe the allies could have asked for Germany’s military “help.”

Some left-wing German media outlets condemned the Assad regime’s chemical attacks but called for a non-military engagement against Syria in the form of strengthening sanctions against Syria’s patron, Russia. Conservative commentators on the other hand rightly stressed the fact that if there is no military retaliation against Assad, then, “the nuclear weapon of the little man” will be a common preferred weapon of mass destruction. Whether the recent strike was a serious retaliation step is a different question.

While the German public discusses these current developments it’s striking that some renowned think-tanks or foreign policy platforms also address Germany’s military potential and the alleged need for its “military revival.” Given the official views of German politicians in the last couple of years, and the increasing belief that Germany will to be a global actor, one could actually expect that Germany would have taken an active and joint role in striking the Assad regime. However, this did not happen.

Thus, why, on the one hand, do German politicians and renowned voices tend to discuss a militarily active Germany while not being involved in the case of actual opportunities such as joining the coalition against the Assad regime? The answer is based on domestic and external factors.

Due to its historical burden and post-WWII perception of a peaceful oriented foreign policy, German military engagement – in comparison to France or the U.K. – has generally been less on the country’s ambitious political agenda, despite rather external pressures. However, because of recent developments in transatlantic relations and other global developments, there is a steadily growing number of voices calling for a strengthening of European security – indeed, meaning the strengthening of the German military. In this sense, politicians underscore their country’s security interests by stressing the importance of the EU and its insufficiency in security matters. However, reality does not fit with the perceptions of German policy makers.

First of all, it’s very unlikely that a collective European idea of joint security will be established in the near future. The U.K. is leaving the EU and France, as a permanent member of the UNSC and a nuclear power, is also capable on its own. Secondly, despite the fact that the German army faces some scandals, the military’s capabilities are also extremely lacking despite all the rhetoric ambitions on strengthening the German military and the country’s alleged will to take its own fate into its hands. Thirdly, while on one hand the German public supports a more active role of Germany in global politics, there is not a majority who support any military engagement – despite louder calls from leading policymakers and international voices. As above mentioned, the public did not support a recent joint military strike against Syria.

Hence, it’s a bit strange that Germany has positioned itself within the circle of military powerful Western circles in the form of permanently commenting on global political and military related issues when it is not able to show any effective military capabilities. Furthermore, there are no serious signs that this will or can really change in the near future. The government neither tries to persuade the German public for a more militarily characteristic active role, nor does it plan to increase the country’s military spending – again, despite several calls from global voices. Thus, it would be more convincing if political elites take serious and realistic steps by leaving out ambivalent stances.