Arms imports of Middle Eastern countries have increased more than twice during the last decade. The main reason for this increase is the fact that most of the actors in the region directly or indirectly are involved in conflicts. 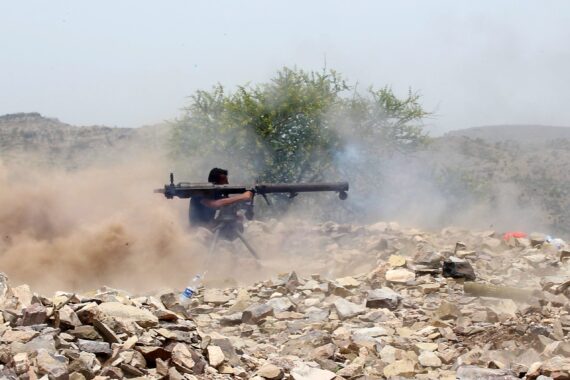 A Yemeni pro-government fighter fires a recoilless rocket launcher weapon as Saudi and Emirati supported forces take over Huthi bases on the frontline of Kirsh between the province of Taez and Lahj, southwestern Yemen, on July 1, 2018. SALEH AL-OBEIDI/AFP/Getty Images

The Middle East has become one of the most important destinations of arms exports in recent years. Arms imports of Middle Eastern countries have increased more than twice during the last decade. The main reason for this increase is the fact that most of the actors in the region directly or indirectly are involved in conflicts. Additionally, the continuing instability in the region has also forced many countries to obtain more weapons.

There are three major reasons for Saudi Arabia’s increase of arms imports. First of all, Riyadh aims to strengthen its own defence capacity in order to secure the survival of the regime in Riyadh. This concern has become more visible particularly in the post-2011 era. Secondly, Riyadh would successfully conclude its campaign in Yemen against the Iranian-backed Houthis. Finally, the Saudi regime feels compelled to pay the price to Western governments for the security umbrella that has been provided to Riyadh for many years.

Similar reasons can be observed for Egypt. Countries such as the U.S., France and Germany have provided the Sisi regime the international legitimacy it needed in the post-2013 coup period. In return, the Sisi regime concludes arms deals with these countries in order to pay the price for their support. However, these purchases receive heavy criticism from various groups in Egypt that cite the deteriorating economic situation in the country.

A number of Western countries appear to be on the export side of the arms sales to the Middle East. The United Kingdom, France, U.S. and Germany play a key role in arms exports to the region. Britain has increased its arms exports by 37% in the last five years, while exports from France and the U.S. have increased by 27% and 25%. Although Germany’s exports have declined at a global level, this does not apply to the Middle East. In 2017, Germany’s arms exports to Saudi Arabia and Egypt increased fivefold.

The role of France in arms exports to the Middle East is particularly remarkable. In the five-year period from 2013 to the end of 2017, Paris’s global arms exports have increased significantly, making France the world’s third largest exporter of arms. The most important issue in France’s arms exports is that these sales do not need the approval of the parliament, unlike many other countries. Arms sales agreements are much faster than other countries, as they are approved by a committee composed of the Prime Minister, defence, foreign affairs and economy ministers. In many cases of these arms deals, the committee turns a blind eye to human rights violations or war crimes. Despite the fact that this attitude causes criticism towards the French government, Paris continues to conclude new arms sales.

It is observed that the biggest agreements of France in this framework were made with Egypt and Qatar. In 2015, it was announced that France had sold 24 Rafale fighter jets and 1 frigate to this country for 5.2 billion U.S. dollars. In another agreement signed in the same year, it was announced that France sold two mistral warships (initially produced for Russia but the sales were suspended because of Europe’s sanctions following the war in Ukraine) for about 1 billion U.S. dollars to Egypt. France made another agreement with Qatar in 2017 which includes 36 Rafale fighter jets and other defence products worth 14 billion U.S. dollars. In addition to these, there are billions of dollars worth of arms deals made by France with Saudi Arabia, BAE and Kuwait.

The increasing instability, domestic and inter-state conflicts, presence of non-state armed actors and deteriorating economic situations will continue to effect the region. This will cause an increasing demand for arms. As a result, the arms sales to the Middle East will increase in the years to come. This will mostly benefit the arms exporter countries, mainly from the West.