Responding to the US government’s suspicion that the evidence provided by Turkey on Gulen was scarce, Prime Minister bluntly said, “When 9/11 attacks happened in the US, Bush said al-Qaeda did it and we did not ask for evidence. Nobody asked. Turkey was the first country to offer help and send our army to Afghanistan.” 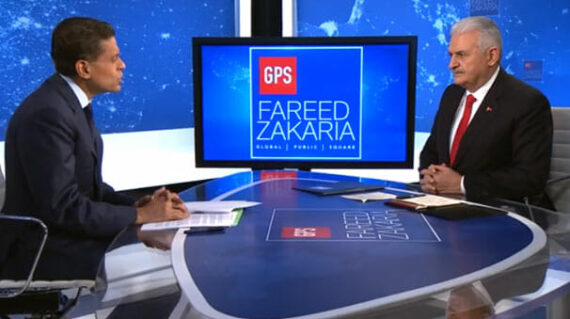 For the first time Turkish government has openly reflected on why the current prolonged tension continue to disturb the two longtime allies: Turkey and the US. Of all the issues, the lack of response on behalf of the US administration in regards to calls from Turkey to extradite the criminal cult leader, Fetullah Gulen, stands as the most sensitive.

In an exclusive interview with CNN’s prominent host, Fareed Zakaria, Turkish Prime Minister Binali Yildirim said despite providing “enormous documentary evidence” on the involvement of FETO in last year’s deadly coup attempt in Turkey, since one and a half years no significant response has come from the US government on this issue.

Responding to the US government’s suspicion that the evidence provided by Turkey on Gulen was scarce, Prime Minister bluntly said, “When 9/11 attacks happened in the US, Bush said al-Qaeda did it and we did not ask for evidence. Nobody asked. Turkey was the first country to offer help and send our army to Afghanistan.”

Referring to the former US national security advisor, Michael Flynn’s public call for support to “our ally Turkey” last year, Yildirim said even Flynn did not provide any assurance to Turkey about Gulen’s extradition.

The prime minister insisted that the propaganda against Turkey on weakening democracy, civil liberties, freedom of press, weak protection for press and opposition was mere “perception rather than reality.”

On the operation against the so-called “independent” journalists and experts who are fleeing the country, Yildirim said this was mostly related to FETO, as the criminal cult had inserted its people into Turkey’s judicial system, bureaucracy, army, civil society and business community to remove the government and rule the country undemocratically.

Since last year’s failed coup attempt in Turkey, the relations between Turkey and US have witnessed a steep downfall after one issue followed the other. As Turkey described the coup attempt, which was resisted massively by Turkish citizens — sacrificing more than 250 lives and hundreds injured — its own 9/11, it found a lukewarm response and “inadequate condemnation” from the lifelong Western allies, the US most importantly. Things changed for the worst as the US unexpectedly saw rightwing leader Donald Trump win elections.

When Turkey called for the extradition of the US-based criminal cult leader Fetullah Gulen, who was behind the coup attempt, unsurprisingly the demand was not met. Under the motive of fighting against DAESH, very recently the US government has provided weapons to the YPG/PYD, the sister wings of the PKK – a serious security threat for the country. The move was another blow to the relations. Lastly, Turkey’s arrest of a Turkish staffer at the US embassy, who had links to FETO, has triggered a visa row between the two countries. Turkish Prime Minister’s recent visit to the US is expected to bring a long needed pause in the downfall of the relations.