Turkish Actor Haluk Bilginer won the Best Actor award at the 47th International Emmy Awards, for his performance in the TV series Şahsiyet (Persona). "I am very happy that this award went to Turkey more than myself,” said the renowned 65-year-old. 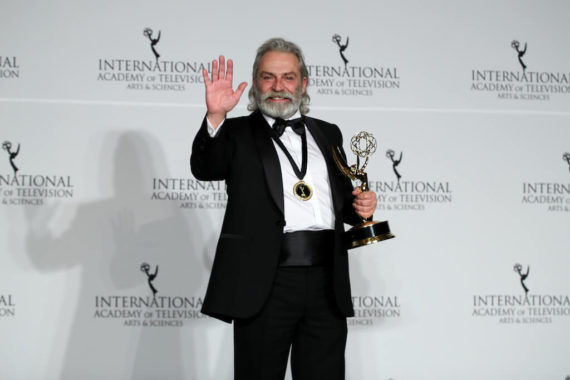 Turkish Actor Haluk Bilginer poses for a photo after he won the Best Performance by an Actor award on Monday at the 47th International Emmy Awards in New York for his performance in the TV series Sahsiyet (Persona) in New York, United States on November 25, 2019. AA

Famous Turkish Actor Haluk Bilginer won the Best Performance by an Actor award at the 47th International Emmy Awards. Bilginer won the award for his performance in the TV series Şahsiyet (Persona) playing the role of Agah Beyoğlu, a character facing a future with amnesia. On receiving the award Bilginer gave a short speech: “Thank you, this is a great honor. My thanks to the Academy for this precious award. Our series Persona is about justice and amnesia, but not amnesia of an individual, more dangerously and harmfully, amnesia of the society. Therefore, please make sure the society you live in does not suffer from amnesia” he told at his speech on the stage that after his name announced as 2019 Best Performance by an Actor Winner.

After the program, he gave a brief interview with Anadolu Agency and sharing his feelings with Turkish media. “I am very happy that this award went to Turkey more than myself. It is very pleasing that work we do with love and admiration is appreciated by others on an international platform and crowned with an award” the actor said.

Following the news of that Bilginer’s success, Culture and Tourism Minister Mehmet Nuri Ersoy, Foreign Minister Mevlüt Çavuşoğlu, Communications Director of the Republic of Turkey Fahrettin Altun and other politicians congratulated Bilginer on different platforms. “This is a very important award for Bilginer himself. But also, a very important accomplishment for Turkey. This award goes to Bilginer but this achievement will set a very good example for young Turkish artists” Ersoy told journalists. “I congratulate our precious actor Haluk Bilginer for Best Actor award that he won at the 47th Emmy Awards with his performance on the Sahsiyet TV Series” Çavuşoğlu posted on his Twitter account.

After Bilginer’s return home, he thanked everyone who congratulated him. “Even being a candidate for this award was very pleasing for me. Winning this award, on behalf of myself, the reason for happiness. On the other hand, the real reason for my happiness is that this award was welcomed as an occasion of pride and happiness in Turkey. This made me happy. It shows that we were needed that kind of energy. Everyone is so happy. Therefore, I am happier than everyone” he said to Turkish journalists in Istanbul.

In the 12-episode mini-series Bilginer plays the character, Agah Beyoğlu, who is diagnosed with Alzheimers. Agâh Beyoglu is a retired judicial officer living alone in Beyoglu, Istanbul’s most populous and lively district. His daughter lives abroad and his wife died years earlier. This monotonous life of Agâh is upset by his Alzheimer’s diagnosis. He knows that he will forget all of his memories because of the illness. While struggling with the idea of his condition, Agâh starts to think that forgetting can be also be an opportunity as well enabling him to comfortably commit a murder that he had planned for years. Recognizing that he will eventually lose memories of the crime in the future, and he would also not suffer from a twinge of conscience.

Along with Emmy winning project, Bilginer has had an extensive career as actor. Bilginer was born in Izmir in 1954. When he studied at Izmir Turkish College he participated in inter-high school theatre competition receiving his first award this contest. After that, he worked as a guest actor at the Izmir State Theatre. In 1979, he started studying theatre at the Ankara State Conservatoire. After graduating from the Conservatoire, Bilginer was an actor for the State Theaters starting in 1977.

Following his education and work experiences in Turkey, Bilginer moved to England to study at the London Academy of Music and Dramatic Arts (LAMDA). From 1980 to 1993, Bilginer actively worked in England. He gained popularity for his appearance over 250 episodes in the long-running British soap opera EastEnders where he played Cypriot Mehmet Osman. He also acted on stage, taking roles in Macbeth, My Fair Lady, and The Phantom of The Opera.

In 1987, Bilginer returned to Turkey to act in Cloud in Love (Kara Sevdalı Bulut). This was his first performance in the Turkish film industry. The same year he also took a role in The Other Side of the Night (Gecenin Öteki Yüzü) with Zuhal Olcay. During these years, he worked at both in Turkey and England. In 1992, he married Zuhal Olcay also an actress. Then, both had roles in The Young Indiana Jones Chronicles television series. Bilginer played Colonel Ismet Bey, while Olcay played famous Turkish female author Halide Edip Adıvar. They later established a theatre project called ‘Play Workshop’ in Istanbul.

During the 1990s, Bilginer continued acting extensively both for TV and film. Some of these movies were Innocence (Masumiyet) directed by Zeki Demirkubuz, Sawdust Tales (Usta Beni Öldürsene) directed Barış Pirhasan, Harem Suare directed by Ferzan Özpetek and particularly ‘Alas! My Father (Eyvah Babam!) which was particularly popular in Turkey.

Bilginer also awarded the Best Actor Award in Angers Film Festival in France for his role in Masumiyet, a film which also received numerous awards in Turkish film festivals.

During 2000s, Bilginer became an important actor both in Turkey and globally. He participated in various projects. In 2003, Bilginer took short role in Buffalo Soldiers directed by Gregor Jordan. In the movie, he acted alongside celebrated US actor Joaquin Phoenix.

For the last ten years, Bilginer has established himself as a highly acclaimed and successful actor both in Turkey and internationally. Bilginer continues to work in Turkish and International films and television. Some of the international film projects that he has taken roles in include: The Reluctant Fundamentalist directed by Mira Nair, Rosewater directed by Jon Stewart, and The Ottoman Lieutenant directed by Joseph Ruben. He also acted in some Turkish TV series including; The Role of My Life (Hayatımın Rolü), Goldens of Istanbul (İstanbul’un Altınları), The Innocent (Masum), and Şahsiyet (Persona).

One of the reasons behind Bilginer’s success is that has a great passion to learn and to develop. In 2002, when Bilginer attended a television program he explained his view about life and acting: “Happiness means fighting. Happiness means always fighting, happiness means to climb over obstacles that are against you. When you do this, it means you’re happy. Without doing anything, with just sitting, you can’t be happy or unhappy.” At the program, Bilginer ended up his speech with his personal motivation: “I tried to do beautiful things, I tried to do the right things. But still, I am a student and I am so jealous of Haluk Bilginer 20 years later. Who knows what he would learn.”