Has Conservative Politics Come to an End in Turkey?

The successive election victories of the AK Party led by Erdogan for the past 17 years obliged the CHP to lean towards (at least ostensibly) to the values it has been against for 95 years. 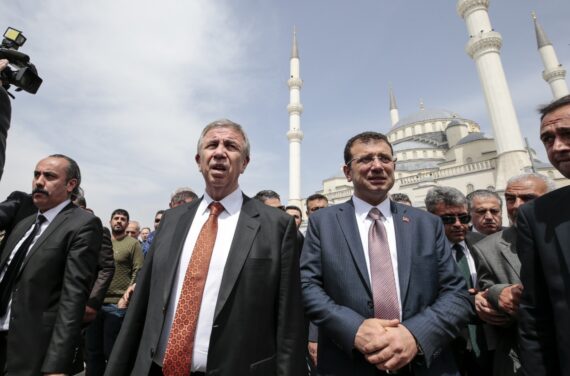 Who won and who lost the local elections in Turkey? The answer to this question depends on your perspective. For instance, the Nationalist Movement Party (MHP) leader Devlet Bahceli said prior to the elections that their target was to receive 52 percent of the vote share for the People’s Alliance, and the Alliance received 51.6 percent. Also, considering that 51.41 percent of the electorate opted for “yes” in the 2017 constitutional referendum and 52.6 percent voted for Recep Tayyip Erdogan in the 2018 presidential election, it is obvious that the current ruling party in Turkey is preserving its power.

On the other hand, the Republican People’s Party (CHP) Istanbul mayoral candidate, Ekrem Imamoglu, won the recent mayoral election by receiving 54.3 percent with the support of the Iyi Party and the Peoples’ Democratic Party (HDP). Although this vote share has only been achieved in Istanbul and represents an alliance, no other CHP candidate has so far received such a high score. This vote share has also been marked as the highest rate a mayoral candidate has so far received in the history of Istanbul municipal elections. Beside this, the CHP’s Ankara candidate Mansur Yavas won the mayoral race in Ankara by receiving 50.93 percent of the vote, which was about four points higher than the ruling Justice and Development Party’s candidate Mehmet Ozhaseki.

The CHP has achieved quite a success in Turkey’s local elections. Does it mean the end of conservative politics in Turkey?

Since the CHP candidates won in Turkey’s capital city Ankara and most populous city Istanbul, it can be said that the alliance led by the CHP has achieved quite a success. So, is it possible to claim that the fears over the CHP persisting for years in the entire political spectrum aside from the CHP base have been overcome? Or, as many claim nowadays, has the heyday of the conservative politics led by Erdogan come to an end? My answer to the second question would be: “No, it has not. Muslim conservative values have been consolidated rather than decline all across Turkey, particularly in Istanbul and Ankara.”

First of all, Yavas is a former MHP member. So, he has a nationalist-conservative political background considering the stance of the MHP, which has been juxtaposed with the Western far-right movements for years in Europe (such a juxtaposition is problematic in many respects but this is the subject of another debate). He firstly became a mayoral candidate from the MHP for the local election held on 18 April, 1999, and was elected as the mayor of Ankara’s Beypazari district with 51 percent of the vote share. He was re-elected for the district in the 2004 election, and ran for Ankara mayor’s office from the MHP in 2009, but could not win the metropolitan race. When he was not nominated by the MHP in 2013, he passed to the CHP and ran for the metropolitan mayor’s office again from the CHP in 2014, but did not win then either. And finally, in the 2019 local election, he managed to become the mayor of Ankara. However, neither in his election campaign nor in any of his statements has he remarked a word that shows his allegiance to the CHP.  He has refused to wear the CHP badge and announced that he will not wear it. Yavas celebrated his Ankara victory with his friends by shouting Allah-u Akbar, demonstrating his belonging to the Turkish nationalist tradition.

Mansur Yavas celebrated his Ankara victory with his friends by shouting Allah-u Akbar and demonstrating his belonging to the Turkish nationalist tradition.

For the first time in the history of the CHP, a candidate has ceaselessly issued statements with religious and conservative underpinnings during his campaign. On his first day in office as Istanbul mayor, Imamoglu made an unprecedented act that was not seen even in the periods of the AK Party or late Necmettin Erbakan’s Welfare Party. He summoned a religious clerk to his office and made him recite the Quran. Also, maintaining separate time periods allocated to men and women for municipality swimming pools (one of the reasons for closing the Welfare Party in 1998 was allocating separate sections for men and women in swimming pools), and keeping the alcohol ban in the cafes and restaurants owned by the municipality were among the election promises of İmamoğlu. Although several names within pro-CHP media outlets and a few CHP politicians tepidly reacted to such promises during the first weeks of his campaign process, İmamoğlu has continued to pursue his politics with a religious and conservative emphasis for six months.

The CHP Chairman Kemal Kilicdaroglu did not appear in the media and abstained from issuing any public statements throughout the election campaign due to the fear that the CHP’s shadow might jeopardize Imamoglu’s image. Pleased with the election result, Kilicdaroglu hinted after the election that the same political rhetoric would continue. Brushing all the questions such as “Is this rhetoric sustainable?” and “What will the CHP base think after a while?” aside, it must be stressed that the CHP candidate received votes from the conservative Turkish and Kurdish people thanks to this new political discourse that propagated separate sections for men and women in pools, alcohol-free restaurants and cafes, freedom for different clothing styles, and prevention of any kind of discrimination against women in hijab in public and private sectors.

Ekrem Imamoglu received votes from the conservative people thanks to his political discourse that propagated separate sections for men and women in pools, alcohol-free restaurants, etc.

In this political atmosphere and the post-truth world (a world where lies comprise the only remaining truth, to quote an academic studying intellectual history), such acrobatic maneuvers of the CHP can work and have apparently worked in the recent period. It is dubious whether a normal political praxis will replace acrobatics and turn into a political stance, or whether the lifestyle of Muslim conservatives will stop being a space of intervention for the CHP. Nevertheless, it is undoubted that the successive election victories of the AK Party led by Erdogan for the past 17 years despite all the challenges in modern Turkey obliged the CHP to lean towards (at least ostensibly) to the values it has been against for 95 years.