There are also some other socio-political indicators that highlight the probable end of the myth of the global village: the rise of the far right in EU countries, the Scottish independence referendum in 2014, the Catalan independence movement in Spain, the Flemish movement in Belgium, the unofficial referendum of Venetian independence in Italy, Brexit, neo-Nazi tendencies in Germany, the Israeli-occupied Palestinian territories, etc. 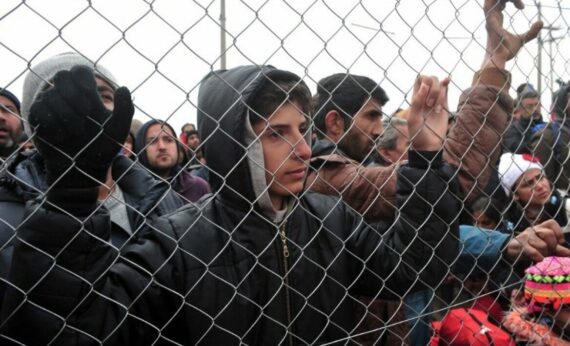 Marshall McLuhan, in his well-known book titled The Gutenberg Galaxy: The Making of Typographic Man published in 1962, conceptualized the contemporary world as a “global village.” The significant book that has sparked a broad repercussion especially in academia was based simply on the thought that advancing communication technologies overpower borders and suppress distances. However, in August 1961, the Berlin Wall had been built and consequently those who once were neighbors then were separated from each other. By contrast with what McLuhan asserted, this situation implied how places and relations could be cut off in a short span of time. The Wall was so symbolically valuable that the globalization tendencies in moral and political life had gained momentum after it was demolished in 1989. As historian Drew Keeling described it, the fall of the Berlin Wall accompanied the rise of globalization.

The world does not consist only of visible and destructible walls. In this respect, globalization has touched and suspended also some invisible walls by highlighting rapidly-changing life styles, mainly through celebrities and by turning individuals into consumers through media programs, advertisements and promotions. In time, global fashions and thoughts that have spread throughout the world pushed cultural differences into the background and a kind of monotypic nation and glocalized culture emerged; so much so that it was supposed that expanded sectors and monopolized companies will remove traces of some worldviews that were depicted as non-human and primitive, such as nationalism, fundamentalism and racism by lauding universal values. Alongside this, the issue of political boundaries started to be analyzed not as international or intercultural but as interpersonal; or more obviously essential border-based deadlocks were reduced mostly to a mental manner among individuals rather than societies or states as a whole.

The Ghettoization of the Globe: The Rise of Walls, Barriers and Borders

In the 2000s, especially after 9/11, interstate conflicts came to the fore again and even more dramatically. As a result of offensive and protective security politics that emphasized countries’ lands and borders, an identity-oriented narrative was reborn from its ashes one century after World War I that characterized the notion of nation-building. Based on this, globalization, which moves toward the suspension of spatial and cultural differences, has evolved into collectively-polarized camps in the shade of some major topics such as racism, Islamophobia, Middle-East politics, the refugee crisis, visa rights, cyber intrusion and securitized borders, barriers and walls. Hence, all kinds of deep-rooted historical accounts among Western countries – including ideas of liberty and the rights of individuals – were brought into question again due to geo-political and national pressure.

It is obvious that the contemporary world that was once described as a village has now turned into tens of isolated ghettos that interfere with, and try to destroy each other. West-centric discourses radically and repeatedly indicated after 9/11 how the direction of globalization was to shift towards spatially-divided and politically-opposite fragments. Today, fragile geographies are reformulated and societies are categorized as “friends” and “enemies” under the influence of nation or state-based identity strategies. For this reason, free countries were occupied, legal governments were overthrown and millions of war-weary people are now exiled, displaced or sentenced to death.

Yes, the Berlin Wall was destroyed, but the desire to stay away from strangers, which first famously acquired an extreme dimension with the Great Wall of China, has continued, thousands of years later, right up to the present. Thousands of miles of border walls have been built mainly for security reasons, between Botswana and Zimbabwe, India and Bangladesh, from China to North Korea, from Turkmenistan to Uzbekistan, from Saudi Arabia to Yemen, from Spain to Morocco, from North Ireland to England, from the USA to Mexico and most dramatically from Israel to Palestine. For those who are closed or surrounded with high walls, barbed wires and deep waters, the myth of the global village is just an unrealized promise. It is instead just a dream for them to simply step out of their own restricted country, city, town and even home. From this point of view, it can be claimed that there is no place for a permanent connection and principled values in a world in which a culture of fear dominates international relations, in which cliché-like negativism regarding the Other spreads like a contagious virus and in which in/visible Walls are constructed in spite of global progress in science, technology and art.

The world we live in is fragile and confined as well as liquid and open in terms of political and emotional ties. US President Donald Trump’s decision that imposes a travel ban against citizens of Iran, Iraq, Libya, Somalia, Sudan, Syria and Yemen can and should be interpreted in this context. In his speech explaining to ban, President Trump said “We only want to admit those into our country who will support our country, and love, deeply, our people.” The most remarkable emphasis in this sentence is undoubtedly on “we.” Although this approach evokes a unifying discourse, it implicitly underlines the evil of “they” who are not like “us” as well as who do not like “us.” Just after the decision was lifted by a federal judge in Seattle, Trump conceptualized this banned mass as “bad people, potential terrorists and others that do not have our best interests at heart.”

There are also some other socio-political indicators that highlight the probable end of the myth of the global village: the rise of the far right in European Union countries, the Scottish independence referendum in 2014, the Catalan independence movement in Spain, the Flemish movement in Belgium, the unofficial referendum of Venetian independence in Italy, Brexit, neo-Nazi tendencies in Germany, the Israeli-occupied Palestinian territories, anti-Islamic attacks, ethnic and denominational divisions in the Middle East, etc.

Turkey as a Bridge

The way of living and doing politics in Turkey corresponds to a stormy mood. Turkey is a bridge that is sociologically close to everywhere and closely connected with various diplomatic affairs. This is both a privilege and a curse. Namely, this means to be open to challenges and to be challenged at the same time; that is why all Turkish governments, but especially the AK Party that came into the power in 2002, have always been obliged to struggle against domestic and foreign terror groups. Despite this, Turkey as a bridge among the highly-charged villages of the ghettoized Globe refers to link, transitivity and convergence.

There is no doubt that bridge-like countries that are able to play mediating roles are vital in the world in which new camps and ghettos are continually generated and fictional strangers are motivated to annihilate each other. Turkey is essentially one of them. Although —and perhaps since – Turkey tries to take an active position to solve chronic troubles of the world such as war, refugees, racism, Islamophobia and xenophobia, it has been the target of some representative terrorist organizations such as the PKK, the Fetullah Gülen Terror Organization (FETO), and DAESH that are supported by those who are nourished, for example, from global weapon suppliers and manufacturers who aim to destroy connective bridges. The July 15 coup attempt in Turkey also should be read within this framework.

Turkey is pushed politically to passivity against the ghettoized, destructive and divisive world powers. However, almost all kinds of socio-political puzzles that summarize deadlocks of the modern world such as the Middle-East question, Western-style standardization and religion-driven disputes are in urgent need of Turkey’s help and support. That is why the future of Turkey is and will be one of the most crucial factors and leading actors that determine the future not only of the conflicting region but also of the fragmented world.

Sertaç Timur Demir completed his BA in Cinema and Television at the University of Anatolia; and holds an MA in Cultural Studies at Lancaster University, where he also obtained his PhD in Sociology. Demir is currently Assistant Professor in Film Studies at Gümüşhane University. His research interests cover cinema, media discourse, modernity, digital culture and time/space philosophy.