Has Turkey Closed the Door for Military Coups Forever?

It should be stressed that the presidential leadership was a crucial factor in the failure of the attempt. By calling the citizens to go on streets and protect democratic rights, Turkish President Erdogan differentiated himself from previous Turkish political leaders and thus mobilized the country against an anti-democratic attempt. 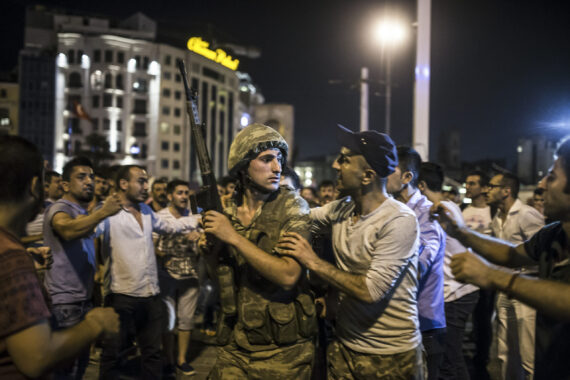 Members of the public try to stop armed military personnel on the night of July 15, 2016, in Taksim. Anadolu Agency

The Turkish Republic has faced several coups and coup attempts since its establishment in 1923 and even throughout the late 19th and early 20th centuries. This trend, unfortunately, did not change in subsequent times as it –once again– came into appearance in 1960, 1971, 1980, 1997 and even on 27 April 2007, when a so-called “e-memorandum” was issued by the ultra-secularist then-General Staff of the Turkish Armed Forces in order to prevent the AK Party’s presidential candidate from being elected.

It’s ill-advised to acknowledge some un-informed Turkish academics who insisted on the thesis that the Turkish military had always respected Turkish democracy and that the only intent of the putschists was to restore the allegedly repeatedly failing Turkish democracy. Similar narratives do not merit consideration as they overlook or intentionally disregard significant factors. Proposing that the Turkish military thus far was able to intervene in politics without the support of foreign allies is imprudent. Thus, it’s quite logical to expect that subsequent to an alleged “restoration” process following coup regimes, even those supporting the tutelage military regimes may put pressure to put an end to this period. That’s it. Furthermore, without the pressure of external factors, neither Turkey would have given up its one-party CHP-regime in 1946, nor would it lend the power to civilians after each coup attempt. But these issues go beyond the borders of this column.

Turks are generally aware of the historical anti-democratic mechanisms and tutelage intending institutions in Turkey, which have been largely attenuated in the recent 15 years. Despite these democratic changes, which prioritized the civil actors in the Turkish political system, today, the question arises about how a military coup on July 15, 2016, could been attempted? Moreover and more importantly, how was the coup attempt prevented on this instance?

The main and striking factor in the prevention of the recent coup attempt was the people’s active will, who were able to directly thwart the execution of the coup. For the first time in Turkish history, people stood against the country’s own military and blocked an infiltrated faction of the military geared to take over the country’s leadership–as a result of this heroic resistance of unarmed civilians, 250 Turks were martyred by the armed forces.

On this instance in contrast with previous coups, the driving force behind the coup was not a Kemalist or ultra-secularist group, but rather the supporters of Fetullah Gulen, whose disciples infiltrated key state institutions over the last 40 years. The Gulenist cult members are widely acknowledged and designated today by all Turkish political parties and societal groups as a terrorist organization, called FETO. All left-wing, right-wing and conservative circles have no doubt regarding the perpetrators of the 15 July coup attempt.

This consensus is also a reason why during the night of the coup attempt, not only conservatives and nationalists took to the streets to prevent the coup –subsequent to President Erdogan’s call– but also some leftists and even some Kemalists deemed the coup attempt illegitimate and illegal. To understand the people’s actual motivations and their standpoints in a broader perspective, our book-publication, ‘Democracy Watch: Social Perception of 15 July Coup Attempt’ from 2016 may be a good reference to contextualize Turkish people and their perception of the 15th July coup attempt.

In the 1990s, when the armed forces still controlled Turkish politics by indirect mechanisms –such as the media etc. – this kind of collective civil mobilization against an anti-democratic armed actor would be unimaginable. Thus, both the partly successful de-militarization process of Turkey’s politics in the recent years via rise of civil-democratic politics and the fact that the coup was attempted by a prevalently hated group, the FETO, were important in thwarting the coup. This is also a fundamental reason why the state of emergency, which will end in the coming days, was not opposed by the majority of Turks since its main target was the FETO.

Furthermore, it should be stressed that the presidential leadership was a crucial factor in the failure of the attempt. By calling the citizens to go on streets and protect democratic rights, Turkish President Erdogan differentiated himself from previous Turkish political leaders and thus mobilized the country against an anti-democratic attempt. The result was ultimately a success, reaching yet another successful milestone paving the way to Turkey’s progressive democracy path.

Nowadays, questions also arise as to the plausibility of potential future coup attempts. Undoubtedly, steps such as the strengthening of people’s democratic sensitivities, sustaining the democratic transformation of Turkey’s political institutions, continuing the fight against illegal groups within the army such as FETO, and the establishment of a further professional-democratic understanding of the armed forces by stressing civilian control will be the main factors in minimizing the likelihood of future coup attempts – regardless of their affiliations. Of course, the importance and meaning of the Turkish armed forces for Turks is not to be disregarded or diminished and it’s true that this perception is based on a rather emotional, religious and historical backdrop. Nevertheless, this fact does not hinder the need to further develop a sincere democratic understanding of civil-military relations in Turkish politics.

In this sense, it’s important to stress the recent institutional step, according to which the chief of General Staff and force commanders will henceforth fall under the new Defense Minister – a civil person. As already known, the previous Chief of General Staff, General Hulusi Akar, quit his job as military official right after he was appointed as the new Defense Minister in Turkey’s first presidential cabinet last week. Thus, it seems that an interesting transition model was formulated in order to establish an effective increase in civil politics. Moreover, similar progressive steps to develop the civilian control of the military –by taking into account the needs of a strong and democratic military– will most likely provide beneficial in reducing the notion of coups in the minds of anti-democrats, let alone the likelihood of potential future coup attempts by factions of the army.