Turkey's policy of keeping and enlarging its military presence in Syria has two aims: Sustaining Turkey’s national security against YPG and Daesh terror and achieving democratic change in Syria. 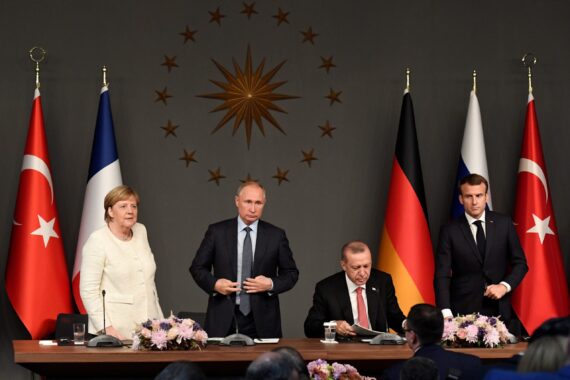 The final declaration of the Istanbul summit, which included Turkey, Russia, Germany, and France was interpreted by some authorities as Turkey having changed its Syria policy. The reason for those comments was the insistence of Russia and France to include the Assad regime in the process of democratic transition in Syria and Turkey’s silence on the Russian and French demand on that matter.

In effect, during the summit Turkish President Recep Tayyip Erdogan clearly expressed that for Syria to transit to a democracy, Assad had to leave his seat and the future of Syria had to be decided by the Syrian people, including the opposition groups and civilians which now reside outside of the country. Almost 3,5 million of them have taken refuge in Turkey from the start of the civil war.

Indeed, Turkey has followed the policy of regime change or democratic transition from the very beginning of the Arab Revolt in Syria. The inclusion of Assad to the process of democratic transition does not necessarily mean that Turkey’s policy on Syria has changed. To remind the reader, once the toppling of the Assad regime by the opposition through a military struggle proved impossible, especially with the Russian intervention in September 2015 and the U.S.’s policy shift of seeking regime change in Syria to providing support to the YPG against Daesh, the political solution to the Syrian crisis has become more salient. Turkey, to an extent, has conceded to a shift from a military to political solution to the Syrian crisis.

Turkey still maintains its position at the outset to remove the Assad regime in Syria. What has changed is merely the path towards that end, the political solution replaced the military solution to the crisis.

However, it can’t be argued that shifting from military to political means constitutes a policy change. The policy change does include not a change in means but a change in ends. Turkey still maintains its position at the outset to remove the Assad regime in Syria. What has changed is merely the path towards that end, the political solution replaced the military solution to the crisis.

Turkey’s current policy towards Syria is shaped around preparing the ground for political change, shift from an authoritarian regime to a democratic one. The final step for ending the crisis in Syria harbors holding free elections in the country, which is expected to be resulted with the loss of Assad and its supporters since they constitute the minority. For that goal, Turkey has been struggling to sustain and enlarge its military presence in the country.

Turkey’s military operations in Syria – Operation Euphrates Shield and Operation Olive Branch – to purge terrorist groups from Jarabulus and Afrin respectively and the Idlib concord with Russia to protect civilians in the region and the Manbij concord with the U.S. to cleanse the region from the terrorist elements can be mentioned in this context.

Turkey’s policy of keeping and enlarging its military presence in Syria has two aims: Sustaining Turkey’s national security against YPG and Daesh terror and achieving democratic change in Syria.

More, President Erdogan declared that after Manbij, Turkey will hold another large-scale military operation towards the east of the Euphrates in order to dismantle terrorist elements from the region. This will also serve the same purpose of sustaining and enlarging Turkey’s military presence in Syria to make possible the political solution to the crisis. Having military presence on the ground and transferring it to political force at the table constitutes Turkey’s current policy towards the Syrian crisis.

Thus, Turkey’s military operation in northern Syria cannot be reduced to its struggle with the YPG. This policy of keeping and enlarging Turkey’s military presence serves for a double purpose: Sustaining Turkey’s national security against YPG and Daesh terror and achieving democratic change in Syria. It includes both defensive and revisionist goals. However, Turkey’s revisionism in Syria should not be interpreted as territorial expansion. One of the clauses of the declaration of the Istanbul summit clearly expresses that Syrian territorial integrity is to be respected and maintained. All countries signing the declaration agree on that Syria should continue its sovereign independence.

Turkey’s position in Syria should not be interpreted as territorial expansion. One of the clauses of the declaration of the Istanbul summit clearly expresses that Syrian territorial integrity is to be respected and maintained.

Nevertheless, it is still not clear that whether the two great powers, the U.S. and Russia, and Iran as well, will adjust to that policy of democratization in Syria. Turkey and European countries, especially Germany, will seek to end the crisis in Syria by finally democratizing the country. Both countries have borne the brunt of the undemocratic political conditions in Syria. Germany suffers from the refuge flood whereas Turkey suffers from both refuge flood and terrorist threats.

Also Read
GCC-Damascus Rapprochement Can Pit Syria Against Turkey Even Further
We use cookies to optimize your online user experience. To learn about our use of cookies and how you can manage your cookie settings, please see our Privacy Policy. By continuing to use our site you are excepting our use of cookies.Accept Cookies & CloseMore Info