Hate crimes increase in the US since Trump’s election 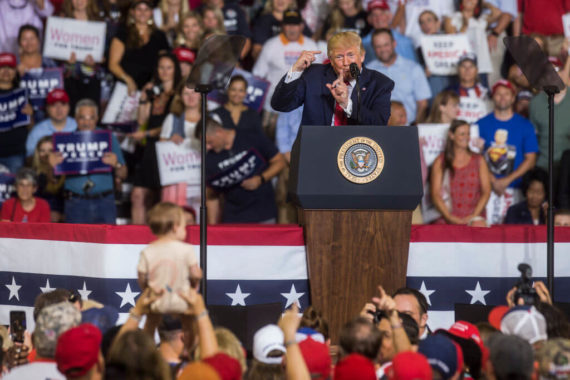 President Donald Trump speaks during a Keep America Great rally on July 17, 2019 in Greenville, North Carolina. Trump is speaking in North Carolina only hours after The House of Representatives voted down an effort from a Texas Democrat to impeach the President. Getty Images

Alexandria Ocasio-Cortez, Ilhan Omar, Ayanna Pressley and Rashida Tlaib have been critical of Trump’s harsh immigration policies. Trump tweeted on Sunday that the four congresswomen should “go back” to where they came from.

Before the vote, Representative John Lewis, a democrat and civil rights leader, who marched with Martin Luther King Jr in the 60s, called on members of Congress to do “the right thing” and condemn the president’s words.

“The world is watching. They are shocked and dismayed because it seems we have lost our way as a proud and dignified people,” 79-year-old Lewis said.

The measure, the first House rebuke of a president in more than 100 years, passed by 240 to 187, after one of the most polarizing disputes the floor has witnessed in recent times.

Raucous crowds chanted “Send her back!” as Trump held his first campaign rally since announcing his 2020 re-election bid.

“I am where I belong, at the people’s house and you’re just gonna have to deal!” Ilhan Omar tweeted, alongside a photo of her presiding over the House chamber.

The US representative was welcomed by a crowd of people at the airport with cheers and support as she returns to Minnesota on Thursday.

“We’ve heard it before throughout our history, but it has no place in America in 2019,” former Vice-President Joe Biden tweeted. “It’s clear that Donald Trump is trying to divide us by race and gender. It’s immortal.”

He praised immigrants as an example of “what makes America great,” while adding: “Donald Trump thinks our nation’s great diversity makes us weak – because he has no idea what makes us great.”

In response to the increasing criticism, Trump tweeted, “Those tweets were NOT racist. I don’t have a racist bone in my body! The so-called vote to be taken is a Democrat con game. Republicans should not show ‘weakness’ and fall into their trap.”

In response to this tweet, Ocasio-Cortez tweeted: “You’re right, Mr. President – you don’t have a racist bone in your body. You have a racist mind in your head and a racist heart in your chest.”

“Sadly, this is not first nor will it be the last time we hear disgusting, bigoted language from the president,” Tlaib said on Monday.

Both Rashida Tlaib and Ilhan Omar – who are both Muslims – have received death threats since they have been elected as congresswomen.

Hate crime in the U.S. has been on the rise since Donald Trump was elected president in 2016.

According to the report, 59.6% of incidents were motivated by bias against race, ethnicity, or ancestry. Crimes motivated by a victim’s religion constituted 20.6% of attacks, and crimes against a person’s sexual orientation made up 15.8%