Since 2012, Ali lived in self-exile which seems to have been a political message of refusing to accept the Syrian civil war which broke out following the 2011 uprising. 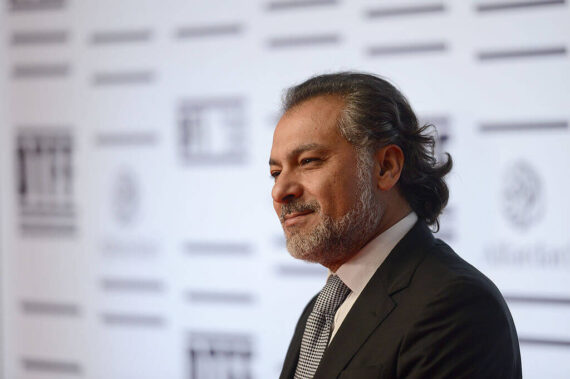 Hatem Ali attends the "Till I Breathe this Life" premiere during the 2012 Doha Tribeca Film Festival at the Al Mirqab Boutique Hotel on November 20, 2012 in Doha, Qatar. Photo by Mark Davis, Getty Images

The sudden passing of Hatem Ali, 58, a highly-respected Syrian film director and actor caused a storm in social media in the Arab world with people recalling his legacy and his priceless contribution to cinema. His collective work left a remarkable impact on Arabs’ collective memory.

With his sudden passing in Cairo, Ali left a huge void behind him. Hatem Ali was uniquely multitalented – he directed, acted, and wrote screenplays – and his cinematic productions tackled important historical, social, religious, and political themes.

The environment in which Hatem Ali was born and grew up is vital to understanding the true importance and meaning of his contribution to Arab and Syrian cinema. He was born to a Syrian family in the Golan Heights in 1962 and at the age of five became a refugee when Israel occupied the territory in the 1967 Arab-Israeli War.

The production of Al-Taghreba al-Falastenya (The Palestinian Exile), a 31-episode drama series, is one of Hatem Ali’s greatest contributions. In this drama series, he documented life under the British occupation of Palestine, the creation of Israel, the displacement of the Palestinians, and the daily life in refugee camps after the Nakba (Catastrophe), which describes the mass exodus of Palestinians in 1948.

The series was exceptional in many different ways: the first of its kind, reflective of reality and reviving the memory of younger generations of what had befallen on the Palestinians in 1948, of displacement and destruction.

In Al-Taghreba, Ali tackled social, economic, and cultural matters that were crucial for Palestinians. This included the differences between the peasant lives in villages and the urban lives in cities, the conflicts between landlords and peasants, the divisions among Palestinians, and the cultural and linguistic differences among various segments of Palestinian society.

Unlike his character Rushdi who refused to leave his homeland, Ali’s life took a different turn. Since 2012, Ali lived in self-exile which seems to have been a political message of refusing to accept the Syrian civil war which broke out following the 2011 uprising.

Not only did Ali direct The Palestinian Exile series, which went viral at the time of its broadcasting in 2004, but he also acted in it. Ali played the role of Rushdi, a young man whose father was killed in the fight against the occupying British forces, and who later in 1948 was separated from his mother. Rushdi had to live with his uncles away from his mother whose new place of residence came under Israeli control in 1948. He would only meet her for a few minutes, in 1967, after being smuggled into present-day Israel by a Palestinian-Israeli.

The series ends by Rushdi tearing up an offer letter he receives from Pakistan to undertake his undergraduate studies, sending a message to Palestinians that they should not leave their country despite the difficult conditions of living under occupation.

In 2008, Ali agreed to direct a TV series based on the Time of White Horses, a novel written by Palestinian novelist Ibrahim Nasrallah, which portrays life in a Palestinian village. However, his dream didn’t come true as certain mainstream Arab TV channels hesitated to produce the series because it was about Palestine.

Unlike his character Rushdi who refused to leave his homeland, Ali’s life took a different turn. Since 2012, Ali lived in self-exile which seems to have been a political message of refusing to accept the Syrian civil war which broke out following the 2011 uprising. After 2011, Ali kept moving between capitals without publicly criticizing the Assad government, which didn’t send a representative to his funeral.

In 2015, the Syrian Actors Syndicate fired Ali and 200 other actors “for not paying their annual fees.” The state-owned media in Syria allocated limited coverage to Ali’s death. This can be taken to be indicative of the regime’s views on Ali, which are similar to those it holds on Jamal Suliman, a well-known Syrian actor and a friend of Ali.

Upon his departure from Syria, Suliman was unable to return to Damascus to bid farewell to his ailing mother. He recalled how she would call him “Abu Saleh,” his name in Al-Taghreba, stressing the importance of the series in the collective memory of the old and young alike.

Ali’s love for Damascus was exceptional. In the two-part drama series The Four Seasons, he detailed the daily life of a family in Damascus. His work could easily be used by anyone looking for references about the daily life in Damascus in the late 1990s and the early 2000s.

In 1998, he directed Al-Zeer Salem, which brought him a lot of fame in the Arab world.

Ironically, and against his dying wish, Ali passed away in a hotel in Cairo, while stopping there to prepare for another drama work. Damascus, which he loved, expressed this love back, with thousands from all walks of life attending his funeral, including actors who are known to be loyal to Bashar al-Assad, in a rare scene that Damascus has not witnessed in nearly 12 years.

The TV drama addresses the events that sparked a 40-year war following the killing of Udai bin Rabia’s brother, highlighting blood feud, a complex phenomenon that predates Islam in the Arab world.

Ali’s contribution to historical drama includes a series on Saladin and his conquest of Jerusalem, and the history of Muslims in Andalusia, including the rise and the fall of Muslim rule there.

Additionally, he directed a drama series about Omar ibn Al-Khattab, the second Caliph of Islam, documenting his life starting from the age of 18 until his death. His works documented the less-known and less-visited history of the Arab and Muslim worlds, including that of Spain.

Just before he passed away, Hatem Ali renewed his two-year Syrian passport. Upon his death in Cairo, his body was transported to Damascus, the city he loved and depicted in his works, to be laid to rest at Bab al-Sghir Graveyard, uniting Arabs and Syrians in a rare scene, and leaving behind important historical dramas.

Hatem Ali was not an ordinary director, but an original and brilliant one, who felt the pain of his people and understood their history. Just as he turned significant historical events into everlasting memories, Hatem Ali’s memory too will be honored by many in the region that will remember him as an outstanding director and actor.