The HDP should not overestimate the Turkish state’s choice to leave the “political path” open. As the HDP embraces a louder affiliation with the PKK, counterterrorism measures might be hardened to hurt the party organization more seriously. 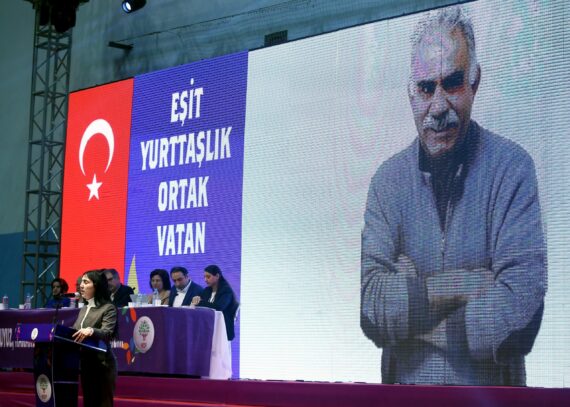 Jailed co-leader of the HDP, Figen Yuksekdag (L) delivers a speech in front of the jailed PKK leader Abdullah Ocalan in Ankara during the second general assembly of the party. ADEM ALTAN/AFP/Getty Images

HDP is adding new instances of embracing PKK terrorism to its long list. Most recently, Musa Farisogullari and Remziye Tosun, two HDP MPs from the city of Diyarbakir, attended the funeral of Mehmet Yakisir. Mehmet Yakisir was the PKK’s regional leader for Turkey’s Black Sea region. Further, he was leading the group who killed the 15-year-old teenager Eren Bulbul last summer. In the instance, Eren Bulbul had seen some suspects around his village in Macka, Trabzon and reached out to soldiers for a search. The hiding PKK group shot him dead together with Sergeant Ferhat Gedik while Bulbul was leading the way for the soldiers.

The regional leader of the PKK, Yakisir has quite a record of killings and other terror crimes in his resume. After a year-long search, Yakisir was killed by Turkish security forces in a counterterrorism operation last Sunday in the countryside of Gumushane. Yakisir’s burial ceremony, of course, was not missed by HDP members. Not surprisingly, an immediate investigation started for the HDP MPs who attended the funeral. MP Tosun, in response to the investigation, said that she does not recognize the investigation. HDP’s Diyarbakir office also embraced the act. The party’s provincial chairman Serif Camci said in his statement that “Tosun and Farisogullari are implementing a political struggle matching with the realities of our people.” He also stressed that he is proud of Tosun and Farisogullari’s participation to the ceremony.

“Political struggle” is the key part of Camci’s statement. The HDP, in practice and discourse, still positions itself as the political wing of the PKK’s armed campaign. The feelings are mutual as the PKK also treats the HDP in this way. At the end of the day, the HDP has very little autonomy other than following the PKK’s dictates in a number of issues from its leadership choice to the making of the MP lists and to its policy proposals and general political discourse. The party often, all the time to be accurate, whitewashes the PKK’s acts of terror and puts Turkey on the spot as the scapegoat.

The examples are too many but just to name two, the HDP constantly keeps blaming Turkish security forces for the partial demolition of Eastern towns such as Cizre, Nusaybin, and Sur where the PKK tried to start an urban war by planting bombs around and within these towns. The PKK planted the bombs, the PKK declared the urban “war,” yet the HDP managed to blame the Turkish security forces for awakening the PKK members from a dream of revolutionary urban war.

The number of political killings is on the rise as the PKK has increasingly targeted AK Party politicians of Kurdish origin in the region. More, the PKK continued to execute unarmed AK Party supporters in the region after the June 24 elections. Nevertheless, the HDP is very quiet on the killings of such civilians and never blames the PKK for its murders, which is quite problematic.

The HDP, in fact, crossed the line for a political party long ago. It functions as the political wing of the PKK. Yet, how come it is still not banned and can take place in parliament? From a pure legal perspective, such a party would be banned long ago in any Western democracy. However, decision makers in Turkey believe that the past closures did not stop the PKK to form new seemingly legal parties. Further, when the PKK loses its political wing, the organization propagates that armed campaign is the only available option to pursue its goals. Such a message was effectively used in the past by the PKK to widen its support base in southeastern Turkey.

Turkey has chosen to tolerate the political wing of a terror group. The HDP also seems to sense this choice and acts quite boldly. As for the PKK, it is a win-win game. It utilizes the HDP’s legal network for its propaganda and recruitment purposes. When the party goes through investigations and party members are arrested for terror related charges, it is still not a loss for the PKK. At the end of the day, the arrested HDP members allow the PKK to build a story of victimhood.

Despite the HDP’s misuse of its legal network, the Turkish state does not ban the party. Ankara allows the party to function but ensures that individuals are investigated when needed. HDP members who are affiliated with the PKK or show open support to the PKK go through investigations and spend long terms in jail if found guilty. The message is clear, you can still do politics in the ranks of the HDP as long as you can keep yourself from out of the PKK circle. Nevertheless, the HDP should not overestimate the Turkish state’s choice to leave the “political path” open. As the HDP embraces a louder affiliation with the PKK, counterterrorism measures might be hardened to hurt the party organization more severely.