This is India today, an increasingly autocratic and nationalistic state that’s now exerting its illiberal political ideology well beyond its borders. 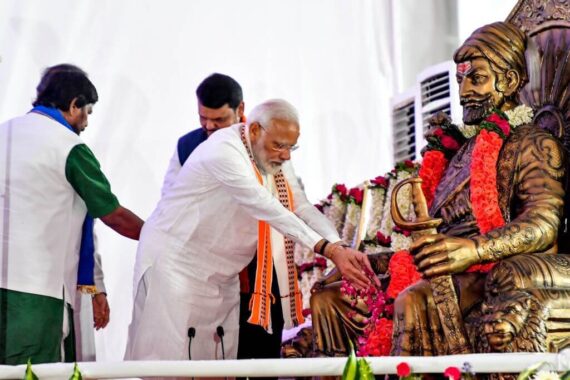 India's Prime Minister Narendra Modi (C) showers flowers on a statue as he attends a public rally in the run up to the Maharashtra state assembly elections, in Mumbai on October 18, 2019. Photo by Indranil Mukherjee, AFP via Getty Images

In the space of a mere three decades hateful and divisive Hindu nationalist slogans have propelled Bharatiya Janata Party (BJP) from a fringe political party to a national party to India’s ruling party, a result that has inflicted great harm on the country’s democratic institutions, bilateral relationships, global reputation and religious minorities.

It’s easy to forget today but BJP won just two parliamentary seats in the 1984 election, emerging as a national political force only after whipping up anti-Muslim sentiments leading up to, during and after the destruction of the historic Babri Mosque in 1992 at the hands of 150,000 Hindu nationalists associated with BJP and Hindutva organization Vishva Hindu Parishad, an event that helped put the party into position to form a coalition government in 1998 and then ultimately unilateral power in 2014.

In the six years since Narendra Modi led the party to victory in the 2014 elections, the BJP ruled government has chipped away at the rights of Muslims and cracked down on its critics, including political opponents, journalists, and human rights activists, forcing Amnesty International to cease its operations in the country out of concern its employees were being threatened and intimidated by the government for publishing reports on the Delhi Police Force’s role in the February 2020 violence, which resulted in the murder of more than 50 Muslims, and the use of torture by its security forces in Kashmir.

It’s for these reasons India’s democracy was downgraded from “free” to “partly free” in the most recent Freedom House democracy report, which delivered a scathing indictment on the Modi government, accusing it of “driving India towards authoritarianism” and encouraging the “scapegoating of Muslims” and cracking down on critics.

Worryingly – the worst the economy performs, or the louder critics of the Modi government grow, the more BJP dials up the vilification of religious minorities to divert attention away from its failings or transgressions.

Notably, Freedom House wasn’t alone in its condemnation of the Modi government, with Sweden based V-Dem Institute also downgrading India’s democracy to what it calls “electoral autocracy.”

Worryingly – the worst the economy performs, or the louder critics of the Modi government grow, the more BJP dials up the vilification of religious minorities to divert attention away from its failings or transgressions.

When the government mishandled the initial COVID19 outbreak, the government joined online miscreants in falsely accusing Muslims of deliberately spreading the virus, and when farmers from Punjab and Haryana linked arms and marched to the capital Delhi to protest against laws that pave the way for the corporate takeover of the agricultural sector, leaving their farms and communities vulnerable to exploitation and destruction, BJP leaders falsely accused them of being part of foreign funded Sikh separatist plot.

In openly confessing its commitment to Hindutva ideology, the rhetoric of BJP leaders, including Modi, has become inseparable from extremist militants who vow to cleanse India of non-Hindu minorities, and thus explaining the year-on-year upward spike in religious based hate crimes, with Muslims the target of 78 percent hate crimes, of which roughly two-thirds have occurred in states ruled by BJP, according to India Spend.

Perpetrators of violence against religious minorities now feel so emboldened and so certain their attacks against Muslims, Dalits, Christians, Buddhists or Sikhs enjoy the tacit and even implicit approval of the state that they record and upload footage of their hate crimes onto social media platforms without fear of prosecution.

“We are aware of the latest hate crimes because they are recorded by the perpetrators themselves, a phenomenon that began in the last decade – lynching, beatings, even a beheading – coinciding with Narendra Modi’s growing grip over India’s electoral politics and the Hindu psyche,” observes Indian journalist Samar Halarnkar.

It’s important to note here that Hindu nationalism is what drove the Modi government to suddenly and anti-democratically strip Kashmir of its semi-autonomous status on August 5, 2019.

“They do it to inspire others, cow down minorities, mainstream hatred (more than it already is) and send a message to the hardline government they elected – you are not hardline enough.”

It’s little wonder famous Indian personalities, such as novelist Arundhati Roy, are warning “the situation in India is approaching genocidal,” a view shared also by prominent scholar in conflict and violence Dr. Gregory Stanton – who warned recently that “preparation for genocide is definitely underway in India,” adding, “The persecution of Muslims in Assam and Kashmir is the stage just before genocide. The next stage is extermination—that’s what we call a genocide.”

It’s important to note here that Hindu nationalism is what drove the Modi government to suddenly and anti-democratically strip Kashmir of its semi-autonomous status on August 5, 2019, a move considered a signal to BJP voters that the party is committed to transforming the country’s secular democratic identity into a tyrannical Hindu theocracy or Hindu rashtra.

What has become increasingly evident in recent weeks is that Hindutva organizations have expanded their influence and reach throughout the Indian diaspora, as witnessed recently when a mob of right-wing Indian Australians ambushed and attacked a car carrying several Sikh men in Sydney earlier this month, presumably because they had participated in a solidarity march for the Indian farmers protest in Delhi.

“For the first time in Australia we are witnessing tensions within Indian community groups, with one group attacking another because they demanded justice from the Indian government,” Deepak Joshi, an executive with The Humanism Project, a secular Indian expatriate advisory group, told me.

“In the past year or so we have witnessed several instances of online hate and threats of violence against those who criticise the Modi Government and against Muslims in particular in Australia, but this hate has been particularly directed against the Sikhs and social media since the farmers movement began.”

Hindutva organizations and individuals have also been calling for a boycott of Sikh and Muslim owned businesses, prompting an Australian parliamentarian to warn of a growing threat within the Indian expatriate community, specifically “extremist, right-wing Hindu nationalist part of the community.”

Stanford University anthropologist Thomas Blom Hansen argues in his new book, The Law of Force: the Violent Heart of Indian Politics, that Hindu nationalists have made “public violence and the mobilization of public anger into some of the most effective means of political expression in the country,” telling The Nation that “the enjoyment of violence, the pleasures of hatred and vengeful fantasies, and the license to kill” are factors that contemporary India shares with Nazi Germany on the eve of the Holocaust.

To that end, it shouldn’t be forgotten that BJP draws its ideological DNA from India’s largest Hindutva organization – Rashtriya Swayamsevak Sangh – whose founders drew its inspiration from European fascists, including the Nazis, in the 1930s, and thus partly explaining the recent Nazification of laws in several BJP ruled states, including legislation banning Hindu women from marrying Muslim men.

This is India today, an increasingly autocratic and nationalistic state that’s now exerting its illiberal political ideology well beyond its borders.