The new catchphrases “Stop Immigration!” and “Defend Italians from the invasion” feed xenophobic and racist rhetoric aimed at Islamic communities and irregular immigrants. 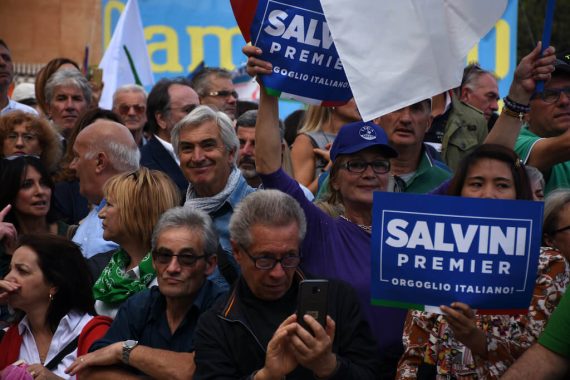 The fabric of Italian politics has changed since February 2021. With the electoral triumph of Lega and Fratelli d’Italia, two far-right parties are taking the lead. Lega sits at the table of Mario Draghi’s government while Fratelli d’Italia takes a front-row seat in the opposition. At the same time, they use increased immigration to fuel the political debate in Italy.

Immigration in Italy over the years

Traditionally, migration in Italy consisted of Italians moving from the south to the north in search of better jobs and living conditions. However, this flow started to wind down in the 1970s. In its place, immigration from outside Italy started to increase in the 1980s and became noticeable in the 1990s with the enactment of the Martelli law (Law No. 39 of February 28, 1990). This law acknowledges Italy’s new “country of immigration” status. Since then, immigration increased further, and anti-immigration sentiments continued to proliferate.

“Needed but not welcome”

According to Maurizio Ambrosini, professor of sociology of migration at the University of Milan, the integration of immigrants in Italy is determined by the gap between the economic and the political-cultural paradigms. In Italian society, immigrants are “wanted but not welcome.” Economically, many regions welcome immigrants as a labor supply from which to draw.

Yet, Ambrosini adds, paradoxically, local and regional governmental institutions take measures, referred to as “local exclusion policies,” that intend to suppress migrants. These policies include cultural exclusion, such as banning the opportunity of mosques for Muslims; security exclusion, referring to local measures against irregular immigration; and economic exclusion, limiting the opening of economic activities run by immigrants (for example, running a kebab shop).

Although some of these policies have been defied by the National Office against Racial Discrimination, the situation remains essentially unchanged. Today, the far right in Italy keeps targeting immigrants and their rights while aiming to obscure them, and launching threats against them.

Lega has been an outspoken anti-immigrant party since 1991. Initially, it held a strong stance against southern Italians. However, with immigration ramping up since the “refugee crisis”, the party drastically radicalized its political views on asylum seekers from the Middle East and North Africa. The far-right parties have used the increased migratory flows to shape their political agendas, blaming immigrants for all problems the country has had to cope with.

Read: Calling out the UK: Pushbacks of Asylum Seekers Cannot Be Normalized

The nationalist doctrine of Matteo Salvini’s Lega is as follows: foreigners and immigrants are the archenemies to blame for the economic crisis and social insecurity in Italy. Consequently, the dangerous hostility towards immigration became the centerpiece of Salvini’s campaign. The new catchphrases “Stop Immigration!” and “Defend Italians from the invasion” feed xenophobic and racist rhetoric aimed at Islamic communities and irregular immigrants.

And Salvini is prepared to go to extremes.

Prosecutors in the Sicilian city of Catania accuse Salvini of deprivation of freedom and malpractice for refusing to dock a ship with 147 migrants rescued by the Spanish NGO Open Arms in the Mediterranean Sea in August 2019. Open Arms saved more than 160 refugees at risk. The ship was anchored off Lampedusa, but was not allowed to dock there. Because of poor sanitary and living conditions on board, many migrants threw themselves overboard in desperation.

Eventually, a court revoked Salvini’s ban on entering Italian waters and the refugees on board were granted permission to disembark after remaining off the coast for 19 days. In response to accusations against him, Salvini stated that he merely did his duty as a minister by defending the borders.

Even more frightening is the response of Giorgia Meloni.

The leader of Fratelli d’Italia implied that the ship should be “seized and sunk” once the crew is detained. Meloni is not as well known as Salvini; however, her small post-fascist party is forming a well-structured political system and a crucial network of relations both at a national and international level.

Since the 2019 European parliamentary elections, the support for Fratelli d’Italia has been growing at a regular pace. It gained popularity and support by pressing the European Union to leave the Global Compact for Safe, Orderly and Regular Migration, and favoring a naval blockade on North Africa to stop “illegal” immigration. Furthermore, Meloni does not want to grant Italian citizenship to children born in Italy to refugees and is an extreme advocate of Italy’s Christianity against “Islamization.” In her eyes, an ideal immigration system favors immigrants with a Christian background because they “integrate better.”

Salvini’s and Meloni’s discourse is effective. In 2019, the Pew Research Center noted that 55% of Italians had negative views towards Muslims.

The relationship with like-minded parties across Europe is not only changing the fabric of Italian politics, but also of European politics.

In September 2020, Giorgia Meloni received a letter of endorsement from Hungarian Prime Minister Viktor Orbán. The letter stated that “Italy needs a solid center-right that protects our Italian friends from the wave of immigration, that preserves the values of the traditional family and Christian culture and that helps to avoid economic collapse.” Then, in July 2021, Fratelli d’Italia and other Eurosceptic political parties united in the European Conservatives and Reformists Party (ECR Party), and signed a declaration to protest against the EU’s political position on migration. Poland’s governing Prawo i Sprawiedliwość (PiS), France’s Rassemblement National, Austria’s Freiheitliche Partei Österreichs (FPO), Spain’s VOX, and Italy’s Lega were among some of the other parties to sign.

In this declaration, parties from different EU countries say that their alliance is “a tool of radical forces” trying to develop a European superstate based on traditional family values against mass immigration,” adding:

“We reaffirm our belief that the family is the bedrock of our nations. When Europe faces a serious demographic crisis with low birth rates and an aging population, developing family-friendly policies should be the response, not mass immigration. We are convinced that the sovereigns in Europe are and will remain the nations and the peoples of Europe.”

The message of this declaration, namely that immigrants are to blame for all that is wrong in Italy, speaks to a growing number of voters and puts the wind in the sails of the far right in the country. The relationship with like-minded parties across Europe is not only changing the fabric of Italian politics, but also of European politics. Let us hope that their moderate counterparts can change their course to safeguard European values around solidarity, human rights, and human dignity.

Martine Scharroo is in the final year of her degree on European studies at The Hague University of Applied Sciences. She is following a minor in international law and human rights law, and her interests lie in national and European politics. With a Dutch father and an Italian mother, she has lived both in Italy and the Netherlands.

Also Read
Homeless Migrants Are Harassed, Chased, and Cleared Out by the French Police