Instead of making politics for demands of certain sections in society, the AK Party, interested in all problems of Turkish people, has pursued a more inclusive political style and thus has become Turkey's largest catch-all party. 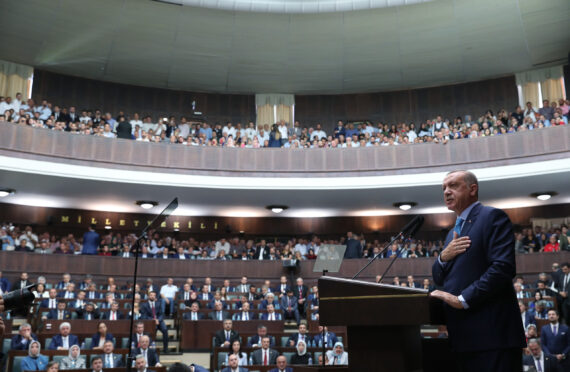 The AK Party is about to celebrate its 17th foundation anniversary. Since the party was established on August 14, 2001, it became one of the game changers in Turkish politics. Turkey went under a great transformation in the political, economic, and cultural areas under the AK Party governments. Understanding Turkey’s transformation in these prominent areas in the last seventeen years requires analyzing the main paradigms in AK Party politics.

One of the things that made the AK Party successful in politics is related to its catch-all characteristic. The party has overcome the classical line of right-wing politics via using catch-all party formation. To do so, the party offered a new political identity and a new style of politics in Turkish political structure and transformed the classical right-Islamist-center right political alignments. Instead of making politics for demands of certain sections in society, the AK Party, interested in all problems of Turkish people, has pursued a more inclusive political style and thus has become Turkey’s largest catch-all party.

As in all other catch-all parties, the party leadership was crucial to attract and mobilize the supporters of the party. Even though the role of Erdogan was very effective in the party’s politics since the beginning, his determinant role on the party had increased in time. As a founding father of the party, his discourse on the party’s politics was the key element not only in decision-making processes but also in shaping and reformulating the lines of the party’s structure in some circumstances. Thus, with the effect of Erdogan’s role and his undeniable charismatic leadership in Turkish politics, the AK Party also strengthened its popularity among masses and became invincible.

Another prominent issue that makes AK Party politics different than other political actors is its unique ideological position in the Turkish political sphere. Even if the party has never had a certain and clear-cut ideological baggage, it settled its ideological position as neither a right-wing nor a left-wing party; but as a conservative democratic organization. With the help of conservative democracy, the party integrated incompatible concepts such as traditional and modern, secular and religious, and morality and rationality, in its understanding and get massive support from various circles of society.

This unique ideological concept also made the party embrace all citizens regardless of their gender, ethnicity, beliefs, and worldviews. In accordance with this, the party emphasized fundamental rights and freedoms excessively in its program since the beginning. Human rights, freedom of speech, freedom of press, democratization, and civil society were the main issues that the party brought to the forefront of its agenda.

All of these factors created a strong bond between the masses and the party. President Erdogan has always been at the center of this special relationship. Erdogan’s leadership style also empowered and transformed this relationship in a positive way. Thus, the tie between a leader and the public came to a peak under his leading role. In other words, he fulfilled the duties of his predecessors, Menderes and Ozal, and transformed the line of politics fundamentally.

Obviously, there is a need to analyze the AK Party’s politics and its function in Turkey’s transformation process in detail. Additionally, there is also a need for evaluating Erdogan’s specific role in this transformation process since the beginning. The SETA Foundation is organizing a symposium in understanding the role of the AK Party on August 14 in Ankara. This special event will also help researchers and academics of Turkish politics to ask further questions in order to understand the role of the AK Party during the transformation of political, cultural, and social spheres in Turkey.