How can Turkey and Qatar strengthen their Economic Ties?

To strengthen economic relations, Turkey and Qatar should finalize the ongoing free trade agreement negotiations, enable the use of local currencies as the medium of exchange in bilateral trade, and investment agencies from both countries should work together. 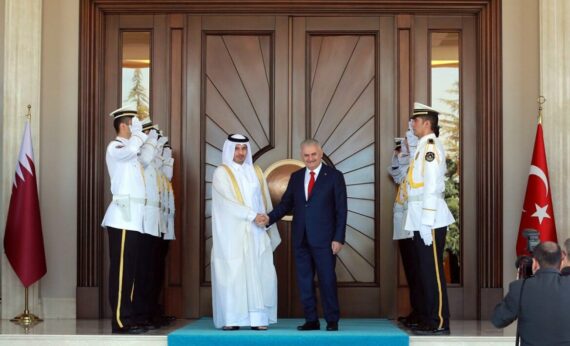 The Third Gulf Studies Forum, held on 3-5 December in Doha, enabled us (academics and think tank experts from the Middle East and beyond) to discuss and share our ideas on the future of the Gulf Region. The second session of the first day focused on the economic relationship between Qatar and Turkey. In this piece, I want to summarize issues that we discussed on strengthening economic relations between Turkey and Qatar.

SecurityBy Serhan Afacan
Before 2002, Turkey had mostly focused on building trade relations with EU countries, but since the Justice and Development Party came to power, Turkey has been trying to diversify its trade partners by seeking more economic relations with the Middle East, Africa, Asia and Latin America. Economic relations between Turkey and Qatar gained momentum during this time period, especially after the Arab Spring. A strong political will from the two countries’ leaders created an impulse to improve trade relations further. The current Turkey-Qatar trade volume is about 750 million USD and it is expected to increase to 1 billion USD soon. But this trade volume is still below the potential of both countries.Qatar mainly imports iron and steel products, electrical equipment, motor vehicles, home textile products, food and furniture from Turkey. On the other hand, Turkey imports natural gas, plastic products, aluminium, and chemical derivatives from Qatar. Considering the trade balance between the two countries and the composition of goods being exchanged, it can easily be said that economic relations between Turkey and Qatar are not based on a zero-sum game, but on a win-win game. That is to say, Turkey and Qatar are not competing to become exporters of the same products. This makes it easier to develop economic relations further. While the short-term target will be to increase total trade volume to 2 billion USD, the long-term target will be to increase it to 4-5 billion USD.

Qatar’s economy is highly dependent on hydrocarbons. Due to the fall in energy prices, Qatar has been seeking to diversify its economic base. The opportunity cost of making structural reforms becomes relatively low for hydrocarbon economies during low energy prices. Therefore, this is the right time to work more on the diversification of economic activities. Qatar and other Gulf countries have been taking this issue more seriously since 2015, when global hydrocarbon prices fell dramatically. If they don’t, their economic prosperity will be under threat.

On the other hand, due to its heavy dependence on foreign energy resources subject to unpredictable geopolitical winds, Turkey has been seeking to diversify its imported energy resources. Turkey and Qatar can cooperate to meet these diversification targets.

Turkey and Qatar should work more on long-term liquefied natural gas agreements. Both countries can make joint investments in underground natural gas storage plants. On the one hand, these investments will help Turkey to get more reliable access to natural gas. On the other hand, they will provide an opportunity for Qatar to sell its natural gas to other potential markets more easily.

The defence industry is another area where both countries can work together. Private companies in Turkey have aggressively invested in the defence industry for the last few years. The public side is also giving full support to these companies. In recent years, Turkey has begun to produce its own weapons, tanks, armed helicopters, drones and military vehicles. Future joint investments of these two countries will not only be crucial for security issues, but also pave the way for new R&D activities and innovations.

Another sector of cooperation is the health care system, which Qatar wants to reform in order to improve its quality. According to the results of one survey, 43 percent of Qataris would prefer to go abroad for the treatment of serious health problems. These results show that Qataris do not trust their health system too much. Turkey has improved its health system since 2003 and it has become one of the top destinations in health tourism. Turkey can share its know-how on the health system with Qatar. Turkish hospitals and healthcare groups can also make investments in Qatar.

At a more macro level, Turkey has established a sovereign wealth fund (SWF) to generate long-term and low-cost finance for strategic and large-scale investments. Turkey is taking baby steps on the SWF now. But Qatar is a mature country regarding the SWF. The Qatar Investment Authority has good experience in this area. Therefore, Qatar can share its experiences with Turkey.

Another lucrative sector is Islamic finance, which Turkey and Qatar both aim to develop within their current financial systems, and to become global players in this field. The two countries can forge strategic partnerships in Islamic finance. Strengthening the capital structure of existing Islamic banks and establishing new ones will move both countries to the upper class of this sector.

With all of these opportunities available, mutual foreign direct investment (FDI) in the defence industry, agriculture, health and banking sectors between Turkey and Qatar will be expected, if both countries build their investment cooperation based on technology and the transfer of experience. Both countries have attracted a significant amount of FDIs since 2000s. But, Western multinational companies are not so eager to share know-how and technology with domestic companies in the host countries. Therefore, Turkey and Qatar cannot reap the fruits of FDIs fully. Mutual investments in strategic sectors between Turkey and Qatar will bring not only static but also dynamic gains to both countries.

To strengthen economic relations, first, Turkey and Qatar should finalize the ongoing free trade agreement negotiations. This free trade agreement will significantly expand bilateral trade between two countries. Secondly, the Central Bank of the Republic of Turkey and Qatar Central Bank can also make an agreement that will enable the use of local currencies as the medium of exchange in bilateral trade. Last but not least, investment agencies from both countries should work together to channel Turkish and Qatari investors towards these and other promising sectors