The objection and criticism to YSK’s decision should not reach to the dimensions that would harm the corporate identity of the institution. 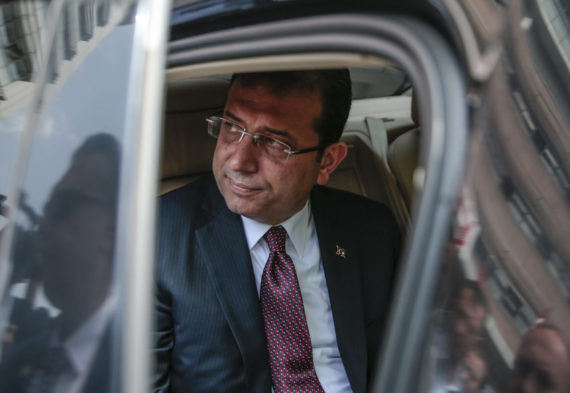 Ekrem Imamoglu from the opposition Republican People's Party (CHP), who narrowly won the mayor’s race for Istanbul in March 31 local elections but whose mayoral certificate was cancelled by the Supreme Election Council (YSK), leaves the headquarters of CHP after party's extraordinary caucus meeting in Ankara, Turkey on May 07, 2019. Anadolu Agency

After a controversial and long-lasting process, Turkey’s Supreme Electoral Board (YSK) cancelled the Istanbul mayoral election on May 6. As can be understood from YSK’s brief explanation, it cancelled the mayoral election since some polling stations were not appointed from among public officials. According to Turkish law, this situation is the reason for cancellation of the elections.

YSK is the supreme institution regulating elections in Turkey and its decisions cannot be appealed. When one examines the history of Turkey’s democracy, it can be clearly seen that YSK has played a crucial role in this process. The main reason behind YSK’s crucial role, in comparison with many political and social institutions, is that it was established according to Turkey’s own dynamics. YSK is an institution established in the period of 1946-1950, in the transition to a multi-party democracy. The most important feature of YSK is not only the control of elections, but the regulating of elections has been left to the judges. That’s why, the elections in Turkey, since 1950, have been regularly carried out although there have been a few exceptions.

YSK is an institution established in the period of 1946-1950, in the transition to a multi-party democracy.

As a legal judgment, the YSK’s decision will naturally be subject of discussion. Many lawyers and politicians expressed their positive or negative opinions about the decision. While the Justice and Development Party (AK Party) and National Movement Party (MHP) have welcomed this decision, the opposition Republican People’s Party (CHP) and Iyi Party strongly criticized it. CHP Chairman Kemal Kilicdaroglu described YSK members who voted for an election re-run as “gang members.” Before the announcement of YSK’s decision, Engin Altay, who is CHP’s group deputy chairman, almost threatened YSK members. The words of Altay, ‘You cannot walk in Kizilay,’ were much debated. Kilicdaroglu also targeted 7 YSK members by announcing their names one-by-one during the party caucus. President Recep Tayyip Erdogan and Devlet Bahceli, have criticized Kilicdaroglu’s explanation.

CHP Chairman Kemal Kilicdaroglu described YSK members who voted for an election re-run as “gang members” and announced their names one-by-one during the party caucus.

Kilicdaroglu’s criticism is at a point that could damage the corporate identity of YSK. As Imamoglu, who is the CHP candidate in Istanbul, declared again and again on the 31 March election night, YSK is one of Turkey’s most respected institutions. In comparison with CHP’s previous allegations, YSK has duly performed its duties in local and general elections. In the 2014 local elections, YSK also cancelled the Yalova election because of CHP’s appeal, which later followed with a CHP victory. On the other hand, YSK not only cancelled the elections in Istanbul, but also gave the CHP mayors its mandates in places such as Ankara and Antalya.

The rerun election will be held on 23 June, 2019 in accordance with YSK’s decision. According to many polls and political analysts the main reason why Imamoglu won the Istanbul mayoral election is that he and CHP officials conducted a moderate campaign. But immediately after 31 March the attitudes of Imamoglu and CHP significantly changed and instead of this moderate position, Imamoglu maintained a more aggressive and impatient attitude. One example of such aggressive attitude can be observed in his reaction to the decision, which he described as a ‘treacherous decision.’ While he frequently declared his confidence in the YSK on the 31 March election night, after the YSK announced to rerun elections, he began to sharply criticize the institution. All explanations show us that the moderate style of Imamoglu is not based on a realistic foundation.

After 31 March, the moderate attitudes of Imamoglu and CHP have significantly changed and Imamoglu maintained a more aggressive and impatient behaviour.

All sides of political terrain must respect the YSK’s decision. The process of appeal is part of Turkey’s democratic culture and means of appeal are frequently used by the main opposition party, CHP. YSK’s decision on the mayoral election can be discussed in terms of both a legal and political dimension. However, there is a crucial point in this context; the objection and criticism to YSK’s decision should not reach to the dimensions that would harm the corporate identity the institution. Also, the targeting of YSK member by singing their names one-by-one may constitute a criminal offense. There must be a difference between criticizing a judiciary institution on the one hand and criticizing its decision on the other, let alone criticizing a political party for which the CHP always chose a harsh one. Specifically, it would be serious harm to the YSK to describe its members as ‘gang members.’ Instead of this accusation, all parties should respect the decision and design their electoral campaign and programs.