How DAESH uses Drones in the Battlefield

Drones that were first used for reconnaissance and surveillance activities on a tactical level in Iraq and Syria are now being adopted on a strategical level and have gained greater impact. 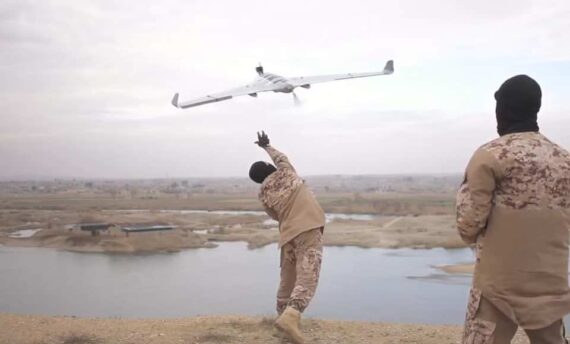 In recent years, non-state armed actors have increasingly used unmanned vehicles as an attack method. DAESH, Hezbollah, Hashid Shaabi, Syrian oppositions, PYD/PKK are continuing to use drones. The IEPs placed on the remote controlled mini land vehicles are used by DAESH for attack purposes. The Houthis in Yemen are using drones to conduct kamikaze attacks on Saudi SAM batteries, and using bomb-laden unmanned marine vehicles for attacking Saudi frigates. From this perspective, it can be said that the nature of future wars will be shaped by unmanned robotic vehicles. Therefore, the countries that fail to develop relevant technologies both for defensive and offensive purposes will be the ones most harmed during times of conflict and combat. This analysis has focused exclusively on drone technology, which is an imminent threat and used regularly by non-state armed actors for the purpose of attack.

The tactics that non-state armed actors use in the Middle East by the means provided by technology have made it difficult to combat against these actors with conventional methods. In particular, DAESH’s character and the way it uses technology has made it the most dangerous terrorist organization that threatens regional and international security and has made it difficult to combat. In this context, the drones that people can freely obtain for hobby and leisure purposes are being used by DAESH for lethal purposes.

When used in conjunction with an explosive device, drones, having just a few hundred dollars of cost, can make the million-dollar vehicles become unusable, cause personnel casualties and, most importantly, drop the personnel motivation in the field through the psychological pressure it imposes. From this perspective, drones that were first used for reconnaissance and surveillance activities on a tactical level in Iraq and Syria are now being adopted on a strategical level and have gained greater impact.

When examining the usage methods of drones by DAESH, we can observe that they have been endorsed for two purposes. The first is to cause the other party maximum casualties and the second is to spread capabilities of the terrorist organization in the media for propaganda purposes. To achieve these goals, drones are used in three different ways:

According to the documents captured from DAESH, the terrorist organization, contrary to what is thought, has a systematic drone program that makes preparations to use drones as a weapon and conducts R&D activities in order to increase capabilities. The above image demonstrates its drone strategy. DAESH aims to maximize the causalities and to fabricate propaganda by using all these tools and methods together.

DAESH’s effective use of drones slowed down the Mosul Operation

Since the beginning of the operation in Mosul conducted by the Iraqi security forces against DAESH, drones have been popular in coordination of SVBIED attacks. Through these attacks the extent of casualties in Iraq reached a point that the Eastern Mosul Operation (the third phase of Operation Conquest) had to be halted for two weeks and the Western Mosul Operation (the fourth phase of Operation Conquest) stalled. Moreover, the percentage of casualties reached 40 percent among Iraqi Special Forces (Golden Division). This reflects the fact that a mere simple technology has the potential of being very effective when, and if, it is used with a good strategy and a correct method.

The drone program, which was successfully implemented by DAESH in Mosul, was put into action against the PYD/PKK in Raqqa. Despite all the US material support, DEASH’s use of drones as an attack vehicle could not be prevented. While the PYD/PKK elements were moving towards Raqqa, as the terrain remains open, drones have been used for reconnaissance/surveillance and the dropping of IEDs. However, as the PYD/PKK elements entered the city center of Raqqa, SVBIED attacks coordinated with drones have increased. Due to the natural camouflage provided by the city center, the SVBIEDs failed to be recognized until the last moment, which caused the Raqqa operation to slow down as a result of the increase in casualties. In an attempt to close the personnel gap that emerged due to the casualties, the PYD/PKK have increasingly turned to recruiting child soldiers who are under the age of 18 years.

A new rising threat in the world

The use of drones for attacks, which was introduced to the literature of irregular warfare by DAESH, has gained an international dimension as other non-state armed actors have begun to adopt similar methods.  The Hezbollah and Opponents in Syria, the Hashid Shaabi in Iraq and Houthi in Yemen have started to use drone technology. The use of drones in the battlefield in a cost-effective manner for offensive, defensive and reconnaissance purposes, is likely to cause regular state armies to include drones in combat concepts in the near future.

Turkey is one of the very first countries, which is challenged by the threat of drones as it is neighbor to Iraq and Syria and is combating DAESH and PYD/PKK at the same time. As a matter of fact, DAESH used drones for attacks against Turkish military units who carried out Operation Euphrates Shield in Syria. In addition, when the member of the DAESH terrorist organization who attacked Reina was captured, two drones were seized in his home. Moreover, a DAESH terrorist was caught in Adana while he was planning to carry out a bombed attack using a drone on a US plane located in the İncirlik Air Field, and to attack a field where US troops were located.

Besides, the PYD/PKK has learned to use this technology as an attack tool while fighting against DAESH in northern Syria.  Within this scope, in August 2017, the first attack was realized by dropping an IEP with a drone on one of the Turkish outposts on the Syrian border. Very likely the PYD/PKK is now preparing to use drones against Turkey regularly, just like DAESH. As it can be seen, both terrorist organizations are in preparation to use drones against Turkey as a means of attack. For this reason, it is necessary for Turkey to rapidly develop combat methods against this new weapon.

What should the combat method be?

The threat posed by drones can be decreased by technological developments. However, an anti-drone system that can thoroughly and successfully defeat drones is yet to be developed. Still, drone technology rapidly continues to advance. In particular, the number of drones commanded by a single operator increases every passing day. The progress in night vision will increase the magnitude of the danger in the near future. Firms sought alternative methods in the fight against drones, among which are mesh arms, electronic jamming systems, protection by eagles and hunting down drones with nets. However, none of them have been sufficient on their own.

ASELSAN is one of the leading companies in the world that produces technology against drone threats. The “IHTAR” developed by ASELSAN against this new threat was presented to units of the Turkish Grand National Assembly and the Presidential Complex. This system is based on the soft-kill principle, which is to disable the drone by electronic jamming. However, in order to combat this threat, both soft-kill and hard-kill methods must be developed together. Thus, when a detected and tracked drone cannot be deactivated by electronic jamming, the hard-kill system would be activated and the IEP or kamikaze attack by the drone would be prevented. This kind of hard-kill system can easily be integrated into ASELSAN’s IHTAR system.

In addition to fighting with drones by developing new technologies, the following preventive measures should also be taken:

Balkan graduated from the Naval Academy in 2004, and received his MA from Gebze Institute of High Technology. He conducts studies on terrorism, non-state armed conflicts, Middle East security, and political geography.