How did Haftar Gain his Way to Tripoli? The Libyan Crisis and the Role of International Actors

The Libyan crisis is a project designed with the help of international actors. The final solution is out of question unless sharing the region between regional and global actors becomes apparent. 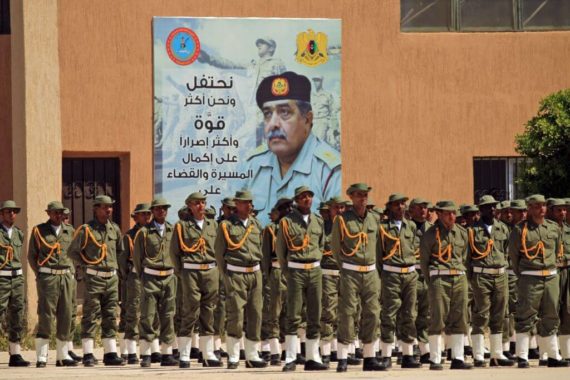 Fighters from the self-proclaimed Libyan National Army loyal to Khalifa Haftar attend their graduation ceremony at a military academy in Libya's eastern city of Benghazi on April 18, 2019. Getty Images

As United Nations Secretary-General Antonio Guterres visited warlord General Khalifa Haftar in Benghazi within the scope of ‘political solution,’ his troops started to attack Tripoli, which caused all solution seeking attempts of the UN for Libya and the statements of international actors to be questioned.

Haftar, the leading actor of the Tripoli attack, by attempting a coup d’etat on the only elected parliament at the time of the General National Congress and the government, argued that a military council should govern Libya. When troops engaged with Haftar and their allies targeted legitimate political institutions, legitimate forces in Libya pushed these allies out of Tripoli and moved their general headquarters to the east of the country. After remaining silent to the attacks towards legitimate forces in Tripoli, the UN initiated negotiations in Skhirat, Morocco, with the aim of a “political solution” in Libya, when Haftar was in a risky situation.

However, Khalifa Haftar prevented the Libyan Political Agreement (LSA), which was the outcome of negotiations that took place in Morocco in 2015 by suppressing the House of Representatives in Tobruk not to ratify the LSA, thus making the Government of National Accord non-functional. The UN Support Mission in Libya and other international actors remained unresponsive towards the role of Haftar.

Between 2016-2017, he clashed with groups that opposed him under the name of ‘counter-terrorism’ and caused a humanitarian crisis by surrounding Derna. In 2018, Haftar attacked and took control of Jufra, which is located between Benghazi and Fezzan. In addition to this, he took control of the Oil Crescent and Temenhint Military Base located in Fezzan’s north-end region. Haftar also established military bases by carrying out operations in Fezzan at the very beginning of 2019.

Between 2016 and 2017, Haftar clashed with groups that opposed him under the name of ‘counter-terrorism’ and caused a humanitarian crisis by surrounding Derna.

Despite the many unlawful and destructive actions Khalifa Haftar took over the years from 2016-2019, and the impossibility of his recognition as an actor within the scope of Libyan laws, LSA and international law, he was recognized as a party to the negotiations by the UN and international actors.

The most tragic part of this crisis is that when the UN Secretary-General visited with the aim of a ‘political solution,’ the forces of a warlord who made a state government unfunctional, began to attack the UN-led government. The current UN situation cannot be explained alone with the UN’s inability of keeping up with recent developments in Libya, as there are also suggestions of a strong UAE lobby and French support for Haftar. The latest developments have revealed that the UN is not fit to act for a solution to the Libya crisis.

Indeed, even though the preparations of Haftar to march to Tripoli were evident, the guarantee that was given to policy makers in Tripoli by the UN and the U.S. made the government hold up to take measures. When the march to Tripoli occurred, the UN had proven that the measures it took and the guarantees it gave were of no significance at all.

No matter how unlawful and destructive Haftar’s takeover was between 2016-2019, he is still recognized as a party to the negotiations by the UN and other international actors.

The U.S. has called for parties to cease clashes and to sit at the negotiation table. Therefore, it has become obvious that Haftar’s attack on Tripoli would not cause any legal sanctions and even if he loses, his position at the table is guaranteed. More, France has indicated that Haftar will not face sanctions by calling ‘Sarraj and Haftar’ to stop the present conflict between the parties. This displays that France sees no distinction between the positions of the Chairman of the Presidential Council, Fayez al-Sarraj, and Khalifa Haftar.

The resolution prepared by the UK and supported by Germany did not pass the United Nations General Assembly (UNGA) and in the meantime, the U.S. and Russia prevented the UNGA from playing a role in Libya.

In other words, with logistic support from the UAE and Egypt, and with political patronage from France, the UN’s silence and the UNGA’s unresponsiveness, Haftar has been attacking the legitimate government for over 16 days now.

Planning to be in Tripoli in 72 hours, Haftar has been repelled with strong resistance from the Government of National Accord (GNA). Having not only openly opposed Haftar, Prime Minister Sarraj has taken a strong and determined stance against the warlord. With the initiatives of the GNA’s Minister of Internal Affairs Fathi Bashagha, a mutual operation room has been established. At the same time, Bashagha ceased security collaboration with France, whom he has contemplated to being in cooperation with Haftar.

With logistic support from the UAE and Egypt, political patronage from France, and with the UN’s silence, Haftar has been attacking the legitimate government for over 16 days now.

By taking political, diplomatic and military actions, all legitimate actors in Tripoli proved that Haftar was wrong in his claims. Haftar claimed that he was the strongest military actor in Libya, who presumably had the support of all Libyans, in addition to his so-called undeniable position in counter-terrorism. However, with all the strength and support that he holds, Haftar has failed in making progress in the last 16 days. There have been well-attended anti-Haftar protests that have been organized in Tripoli. By pointing civilians and the legitimate government as targets under the name of ‘counter-terrorism,’ Haftar has proved that is not a dependable actor.

The past 16 days have shown that the world is expecting Haftar to enter Tripoli. This is supported by the UN’s silence and the UAE’s unlimited logistic support. If he gets the chance to enter Tripoli, some international actors will accept Haftar’s military government in a ‘de facto’ position. If he does not get the chance, he will protest his position as a de facto leader without whom a political solution cannot be reached.

If GNA forces push Haftar back and re-gains ground around his general headquarters, the UN will do whatever it has been unable to do in the past three weeks for the sake of stability and peace in Libya. It will take part in the process to protect Haftar.

The Libyan crisis is a project designed with the help of international actors, including actors from the region. The final solution is out of question unless sharing the region between regional and global actors becomes apparent.