How did the US give up Backing the PKK?

An article in the PKK’s newspaper “Yeni Özgür Politika,” which is published in Germany and circulates across Europe, reads: “Some 25 or 30 years ago, several tourists were kidnapped in violent conditions of warfare. But were they taken hostages; was any ransom asked for; or were they subjected to any kind of ill treatment?” I suppose this means to ask how come the U.S. gave up on backing the PKK. 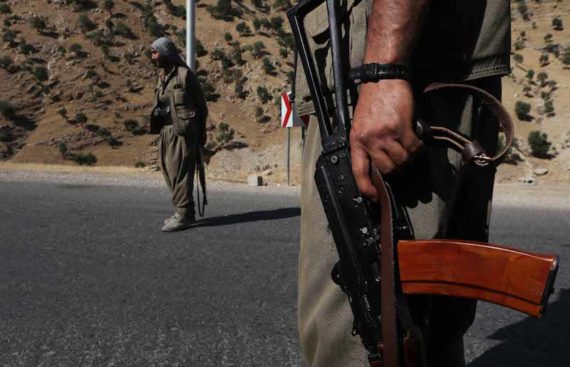 A PKK terrorist carries an automatic rifle on a road in the Qandil Mountains, the PKK headquarters in northern Iraq, on June 22, 2018. Getty Images

Last week, the Washington administration authorized up to $12 million of rewards for information leading to the identification or location of three senior members of the PKK terror group. Accordingly, Washington approved up to $5 million for information on Murat Karayilan, $4 million for Cemil Bayik and $3 million for Duran Kalkan. The U.S. listed the PKK as a terrorist organization 21 years ago, and handed the PKK leader Abdullah Ocalan over to Turkey in 1999.

The three senior members of the PKK are now sought as part of the U.S. Department of State’s Reward for Justice program. To quote the program’s exact words, the “goal is to bring international terrorists to justice and prevent acts of international terrorism against U.S. persons or property.”  It is stated that while the law governing the program is aimed at terrorism directed against Americans, the U.S. also shares information with other nations whose citizens are at risk.

The program describes the three PKK members as follows: “Karayılan, Bayık and Kalkan are senior leaders of the PKK. The Kurdistan Workers Party (PKK), also known as Kongra-Gel is a regionally active terrorist organization and a U.S. designated Foreign Terrorist Organization (FTO).” It goes on to list some of the deadly attacks of the PKK over the past three years that killed 1200 people: “The PKK has targeted Turkish government officials, police and security forces and indiscriminately injured and killed civilians. In 2015 and 2016, the PKK expanded attacks across Turkey, metropolitan centers, and tourist destinations on Turkey’s Aegean and Mediterranean coast. In August 2016, the group claimed a car bomb attack against Sirnak police headquarters, killing 11 and wounding more than 70. In June 2017, the PKK attacked a military convoy in southeastern Turkey, killing over 20 soldiers. Since 2015, the group has been responsible for the deaths of over 1,200 Turkish security officials and civilians.”

Since the program primarily targets the terrorists posing a direct threat to the U.S., the reward announcement for the three PKK militants is justified as follows: “In 1993 the PKK kidnapped 19 Western tourists including an American and in 1995 two Americans were injured in a PKK bombing.” The methods the PKK uses are also explicated: “PKK uses its network and criminal activities across Europe to obtain weapons and materials. The PKK has used suicide bombers, vehicle borne improvised explosive devices (VBIEDs), and other indiscriminate terror tactics. The PKK also recruits and indoctrinates youths, sometimes by abduction, and employs them as militants.”

It is no secret that the life expectancy of someone in the PKK is no longer than 7 or 8 years after joining the terrorist organization.

However, the criminal careers of these three PKK operatives and the PKK’s relations with the U.S., Russia, and various European countries are no secret, as it is already known that these countries overtly or covertly provide support to the PKK. The PKK’s relations in the Middle East and the fact that it forcibly recruits children in its guerrilla forces beginning from 12-years-old are also known. The terror group gives a “commander” title to 15-year-olds and makes them organize suicide attacks. It is also no secret that the life expectancy of someone in the PKK is around 7-8 years after entering the organization. Plus, the PKK engages in drug and arms trafficking and might be responsible for the murder of Swedish Prime Minister Olof Palme, which has remained unsolved up to now.

Forcibly recruiting children in its guerrilla forces beginning from 12-years-old and giving a “commander” title to 15-year-olds as well as pushing them commit suicide attacks are among well know practices of the PKK.

When the PKK leader Abdullah Ocalan was tried following his extradition to Turkey by the U.S. in 1999, he confessed all these to a great extent during his plea. For instance, upon the chief judge’s question whether the article that urged killing Olof Palme published in the PKK’s media outlets affected his murder, Ocalan answered: “No. Huseyin Yıldırım is the one writing these articles. He is responsible for the foreign affairs of the organization. In his article, he threatens Olof Palme and says that he will see what would happen to him. I have received information that Palme was killed by PKK Rejini, which generally operates in Europe.”

Moreover, when Ocalan was asked about the PKK’s involvement in drug or arms trafficking, he said: “Arms trafficking was a vital need for our organization. I directed and approved it. But I am against drug trafficking, I urged [the militants] to racketeer those engaging in this. […] But despite my objections, some incidents happened out of my control. It is very hard for me to control every segment of the organization.”

The PKK does not deny its suicide attacks, mass murders, and involvement in arms and drug trafficking. They try to justify their criminal activities on the pretext that they are all done as part of their fight for freedom, democracy, humanity etc. Yet, reminiscent of the times when the U.S. extradited the PKK leader, the reward offered for the three senior PKK members seems to have caused a great surprise and indignation within the organization. However, they objected to only one item in the list of the PKK’s criminal activities. An article in the PKK’s newspaper “Yeni Özgür Politika,” which is published in Germany and circulates across Europe, reads: “Some 25 or 30 years ago, several tourists were kidnapped in violent conditions of warfare. But were they taken hostages; was any ransom asked for; or were they subjected to any kind of ill treatment?” I suppose this means to ask how come the U.S. gave up on backing the PKK.