How Do We Remember Adnan Menderes in Contemporary Turkish Politics?

Most people still are in the opinion that Turkey owes much to Adnan Menderes due to his struggle for democracy, because otherwise it’s still believed that a quasi-single-party-regime would have continued. 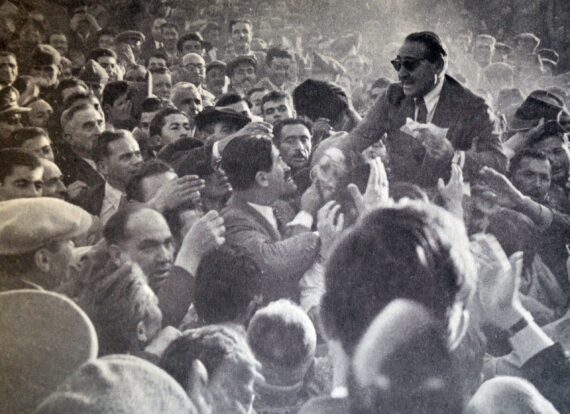 On Monday, the 57th anniversary of the execution of Turkey’s first democratically elected Prime Minister, Adnan Menderes, was commemorated by the Turkish people. At the commemoration on Sunday, Turkey’s current Interior Minister, Suleyman Soylu, who has an important closeness and relation to Menderes, actually summarized Menderes’ political perception of the majority of contemporary Turks by stressing“I want to ask you, what did Adnan Menderes want except democracy? What else did he want except this country’s development, its progress, and the fact not to be humiliated due to people’s beliefs? What other aspirations did he have except constructing dams, building roads for this country, develop the country’s agriculture, and, to develop the country’s industry?”

Menderes has still a fundamental meaning for Turkish democracy and a special place in the minds of Turks with regard to the country’s past and future. It wouldn’t be even that wrong to mention that both left and right-wing oriented Turks remembered his era and his destiny while having for the first time actively resisted against putschists on Turkey’s streets during the recent coup attempt on 15 July 2016.

Menderes was hung by the military junta on September 17, 1961 subsequent to the coup d’état against his ruling DP government on May 27, 1960. Besides Menderes, Fatin Rustu Zorlu and Hasan Polatkan, who were the Foreign Minister and Finance Minister at that time, were also executed by the junta as well. During that time, the Prime Minister had been arrested together with various DP members by the putschists while the judiciary of the junta accused him among other things of violating the constitution and contradicting “Ataturk reforms.”

Menderes symbolized an important figure for Turkish citizens who wanted to end the single-party-regime of the CHP, which ruled the country from 1923 to 1950. Apart from his political experience as a member of the short-lived Free Republican Party (FRP), which was closed down by the government after four months in 1930, Menderes entered into politics as a member of the only party in the country, the CHP on the eve of President and CHP Chairman Mustafa Kemal’s visit to Aydin. Even though it was not Menderes’ purpose to be elected as a CHP MP, he was mentioned on the CHP candidate list, which was based on Mustafa Kemal’s personal decision and which Menderes later noticed. Thus, Menderes became a CHP MP until his expulsion in 1945, at which time the DP was initiated by some similar minded politicians. After the multi-party system was introduced in Turkey also due to external factors in 1946, Turkish citizens became more and more aware of Menderes and his popularity increased during the opposition years (1946-50).

In the first “controversial” democratic election in 1946, for which the DP did not have the necessary time to mobilize and organize itself, the DP had won only 62 seats in parliament. Therefore, it remained in the opposition until May 14, 1950 when it ultimately won the election, receiving 53 percent of all votes. The 1950 elections constituted a watershed in the history of modern Turkey due to the fact that until that time parliamentary politics was perceived merely as an extension of the Kemalist state bureaucracy and administration led, by the single-party-regime. Thus, for the first time, a so-called popular electorate received the opportunity to express its political choice against an ultra-secularist statist approach, represented by the CHP elites.

The DP’s main objective under the Menderes administrations (1950-60) was to change things as soon as possible by addressing the main motto, “Enough! It is the nation’s turn to speak” (Yeter! Söz Milletin) Actually, the DP internalized some of the liberal ideas of the Progressive Republican Party, which had been closed down in 1925, even prior to the establishment of the Free Republican Party – a reaction by the single-party-regime, which early noticed that Turkish people do not accept CHP’s policies.

It can be said that in contrast to the CHP, the DP represented a relatively tolerant and respectful position regarding religion, religious lifestyles and free-market capitalism – despite its similar Kemalism-based stance. However, the DP cadres did not have the necessary power to ensure a comprehensive liberalization of the entire economy for a long period. In other words, the nature of Turkey’s economy did not lend itself to wide-ranging liberalization with additional unexpected declines particularly in the agricultural sector. Nevertheless, these facts do not have a decisive importance regarding Menderes himself as a symbol of Turkish democracy and the people’s will.

Subsequent to the deposing of his last government (1957-1960) by the Turkish Armed Forces on May 27,1960, Menderes was arrested along with various leading party members and put on trial until September 17, 1961. When the junta hung two of his ministers and Menderes himself, several policies which had been implemented by the DP governments in the 1950s that allegedly contradicted with “Atatürk reforms” were cancelled by the junta.

Moreover, the Kemalist version of secularism, after an alleviation period of 10 years between 1950 and 1960 again gained importance as was the case from 1923 until 1950. More interestingly, various projects in the field of economy, which were initiated by the Menderes administration, were also canceled by the junta as well.

Today, for many Turks, although analyzing or reading political developments from a right – or left-wing perspective, it has to be admitted that for most people today Prime Minister Menderes is accepted as a personality who represented the people’s voice – despite political and human weaknesses, which are common in every era. Thus, to understand Turkey’s current political dynamics and the people’s negative stance against potential contemporary tutelage biases, one has to understand those developments in Turkey’s history. Most people still are in the opinion that Turkey owes much to Adnan Menderes due to his struggle for democracy, because otherwise it’s still believed that a quasi-single-party-regime would have continued.