While Russia's mainstream media often focuses on the problematic relations between Turkey and the West, Russian think tanks hold a more measured tone. 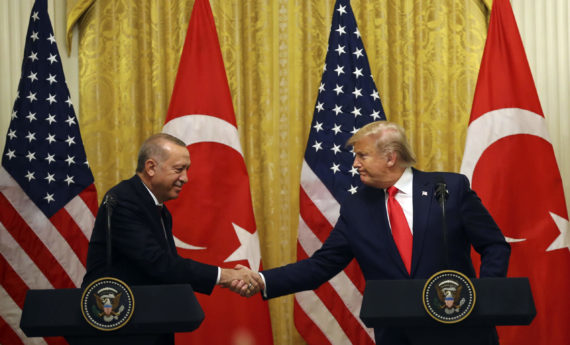 On November 13, 2019, upon the invitation of U.S. President Donald Trump, Turkish President Recep Tayyip Erdogan paid a working visit to the United States. Watching from the sidelines, Russia observed the visit attentively and waited for the outcomes.

The Russian State News Agency, TASS, reported on the visit with the following title: “With or Without the West? Erdogan Makes a Choice in Washington.” The primary question that TASS focused on in regards to the meeting between the two leaders, was whether Turkey’s position in the NATO alliance would change.

In fact, it is necessary to separate Russian coverage of the meeting made by Russian mainstream media, such as television channels and newspapers, on the one hand, with high circulation and broader impact, and think tanks on the other, such as the Russian Council and the Institute of the Middle East, whose publications address a smaller audience who are professionally interested in specific countries. There was a noticeable difference in how both groups covered President Erdogan’s visit to Washington.

Publications from Russian mainstream media targeted at a wider audience, which include the aforementioned TASS Agency, focused on the problematic relations between the West and Turkey, especially in the framework of the NATO Alliance. This is despite the fact that some politicians in Russia consider President Trump to be a leader who is trying to be a businessman in politics, is always ready for dialogue and compromise, and that is just enveloped in a “bad environment,” which refers almost entirely to outside the perimeter of the White House, including Congress, the Pentagon, and the Department of State. Just remember how the State Duma applauded the election of Donald Trump, hoping that he will change the course of relations between the U.S. and Russia. Today the widely accepted opinion of President Trump in Russia is that “he is a good guy, but without power and in a bad environment”.

On the eve of President Erdogan’s visit to Washington, this “bad environment” presented itself in two unpleasant surprises for U.S.-Turkish relations. This came in the form of two bills. One seeking the adoption of sanctions against Turkey due to its operations in Syria, the other which aimed to recognize the events of 1915 as a “genocide of the Armenian people”. The meeting between the two presidents was closely observed by Russia to see, first, how the meeting would enable both parties to resolve old issues, and, how they would be able to deal with new challenges.

The other problems in the relations between U.S and Turkey includes Turkey’s Operation Peace Spring in Syria, American support for the YPG in Syria, Turkey’s purchase of the Russian S-400 missile defense systems, the U.S.’s proposal to supply the Patriots to Turkey, extradition of Fetullah Gulen (FETO criminal cult leader) to Turkey, the “Halkbank” case and so on.

The final press conference between Presidents Erdogan and Trump did not provide much news to the Russian media. They noticed Trump’s favorable tone and compliments to the Turkish president, as well as Erdogan’s return of the famous unpleasant letter to Trump.

The Turkish and U.S presidents again spoke about their goal to increase the trade turnover between two countries by five times, from the average value of USD 20 billion up to 100 billion. Interestingly, Trump’s wording about this target was misunderstood by the Russian media, even the central TV-channels. The Russian media incorrectly understood that Trump proposed a “trade deal” to Erdogan worth up to $100 billion if Turkey refused to use the Russian S-400 air defense systems. As a result, when Erdogan, once again, announced that the Russian-Turkish deal was in motion, it was interpreted in Russia as a rejection of $100 billion ‘in cash’.

During this same time, there were many observers in Russia who were surprised by the fact that Turkey is still trying its best to normalize bilateral relations, with the U.S in despite the problematic relations. What is equally as surprising to them is what Turkey is doing with the NATO Alliance. According to them NATO has lost its sense and meaning after the end of the Cold War, and is facing an identity crisis.

Russian Turkologists and think-tankers on Turkey

Russian think tanks, like the Russian Council and the Institute of Middle East, both located in Moscow, draw a picture that differs significantly from the one that is being shown to everyday Russians through the mass media.

Firstly, Russian analysts are completely devoid of any illusions regarding the possibility of Turkey leaving the NATO alliance whether it be short, medium or long term. Secondly, the fact that Turkey acts more independently in the present day and is building its own security architecture using the S-400, or the fact that it is more profitable for Turkey to leave NATO, does not necessarily entail that this is what Turkey wants. This is an axiom.

In addition to this, the existence of the very serious problems in Turkish-American relations is not a reason for the Turkish leadership to break its ties with the United States, as this would allow distortions towards alternative world centers of power, including Russia. The skill of maintaining a permanent balance in the international arena while simultaneously maintaining its position as an important country for many foreign players is a key advantage for Turkey. Of course,  it will not give this up.

As for the opinion of Russian think tanks, which is also supported by the author of this article, at this stage, there are currently a number of unresolvable problems when it comes to the bilateral relations between Turkey and the United States. These problems include the U.S. support to the YPG, the extradition of Fetullah Gulen to Turkey, and the purchase of S-400 systems in Turkey, which, in one way or another, has negatively affected Turkey’s ability to remain in the F-35 fighter jet program.

Briefly, what could be solved by the Washington visit of President Erdogan was solved. The resolution on the events of 1915 was blocked. However, the problems that cannot be solved today are being confined by Turkey. In other words, Turkish diplomacy seeks a way to separate zones of cooperation from problem areas.

Having carried out Operation Peace Spring in Syria and creating a security corridor along the Turkish-Syrian border, the Turkish leadership has finally set in motion the removal of YPG militants and is proceeding with arrangements to send Syrian refugees living in Turkey to these territories. Obviously, Turkey does not want to be the sole sponsor of this process and will seek financial support from the West. The search for this financial assistance will take place in the European Union as well as in the United States.

A further point, which I suppose may exist between Turkey and Russia is connected to the extradition foreign Daesh fighters. It is clear that Turkey, as the Turkish leadership often says, does not want to become a “hotel for terrorists”. But in order to deport criminals who are in Turkey, the Turkish leadership needs to mold a political response with a proper understanding of the situation both in the West and in the U.S. Turkey must try to avoid any matters or steps that may be interpreted abroad as “blackmailing”. Especially with this sensitive issue, when this is a classic cliché regarding President Erdogan that appears again and again in the West.

Given the fact that the Turkish economy needs a constant influx of foreign investment, it is no coincidence that before the negotiations with Trump, Erdogan met with major American business people. The goal of attracting a large capital into Turkey is not of any less importance for the Turkish leadership than the current situation in Syria. In parallel, the country’s credit and investment ratings should be sorted, which, to a large extent, relies heavily on the United States. If Erdogan’s trip to the U.S. were to be looked at from this perspective, it would be seen as follows:

By obtaining the U.S’s approval for Operation Peace Spring and negotiating in Washington, Erdogan clarified Turkish-American dialogue and sent a message to his partners in the Astana Process (both Russia and Iran) that Turkey was not building exclusive relations with them, and was not going to break away from the West. According to the Russian point of view, Turkey today concludes its most important agreements with Russia and will continue to do so in the near and continuing future. Since these breakthroughs have been achieved between Turkey and Russia, Turkey will continue to try to balance the ongoing dialogue in the West, even if it does not bring significant results for Turkey today.

Naturally, the situation may somehow change after the presidential elections in the U.S in year 2020, if a new administration comes into power in the White House. But there is hardly a voice among Russian analysts who expect rapid changes in the current triangle between Russia, Turkey and the U.S. For Turkey, Russia will be a country to develop the projects and dialogue, which it may not do with the West. While in the U.S., Turkey’s hard battle to address its concerns, and the existence of anti-Turkish voices will continue without any breakthroughs.