The CFA franc and the way in which Western corporations exploit Africa are at the root of the immigrant crisis. ‘Voluntary colonialism’ (a legitimised neo-colonization of Africa) as Gunter Nooke, Germany’s Africa commissioner suggested, will only compound and augment matters Africa. 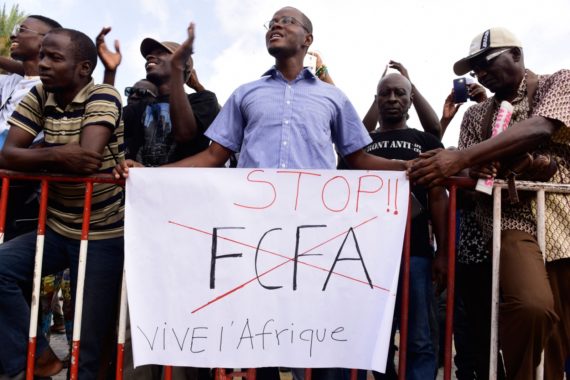 A man holds a sign reading 'Stop FCFA, long live Africa' during an anti-colonial demonstration against the regional CFA franc on the Place de l'Obelisque in Dakar on September 16, 2017. Getty Images

In a manner that totally subverts the Freudian slip, a European (sort of a) leader spilled the beans. In the full glaring of cameras, he vocalized a long held but yet putrid secret of major European powers: the continued colonization of the African continent in the 21st century. His statements unveiled a disturbing truth about how some European nations (France being his earmarked culprit) economically deal with their former colonies in reprehensible and egregious manners.

On January 20, Luigi Di Maio, the Italian deputy prime minister and minister for Economic development, labour and social policies hurled incendiary statements at European powers and France in particular. The leader of the Five Star Movement said: “The EU should sanction France and all countries like France that impoverish Africa;” “European countries, France above all, have never stopped colonizing dozens of African countries.” He uttered these words at a moment France accused Italy of not saving immigrants drowning in the Mediterranean Sea.

Luigi Di Maio is not a friend of immigrants let alone Africans. He climbed the echelon of Italian politics on anti-establishment, anti-immigrants and a dystopia platform. His Five Star Movement, alongside its coalition partner, the far-right League has been stocking fear and hatred against Africans and immigrants. However, his statements were pure facts and along-hold convention in global politics – irrespective of his insincerity. Western powers (and global corporations) exploit African countries in intricate, labyrinthine and camouflaged ways. The West African CFA franc run by France is a good example.

The operation of a colonial currency

The CFA franc is composed of two currencies: the West African CFA franc (XOF); and the Central African CFA franc (XAF). The currency was created and imposed on French colonies in Africa in 1945 as a legal tender. Today, it operates in 14 African countries. The currency has been criticised and derided as a form of a colonial tax that exploits these African countries. Originally, the CFA was pegged to the French franc but now to the Euro; France argues that this is the case for the purpose of monetary stabilization. Yet, the operation of the currency has led to weakened economies, joblessness and currency instability.

Furthermore, France has absolute power to devalue the currency – usually when it faces major macroeconomic imbalances. Interestingly, all the 14 countries that use the CFA franc deposit there currency reserve in the French central bank in Paris. These countries have access to only 15% of their own monetary reserve whereas the remaining 85% can be borrowed at market rates. The CFA franc has stagnated the economies of these countries in many ways: they lack monetary sovereignty; independence in monetary policy formulation; and exchange rates are dictated by the European Central Bank.

The CFA is a colonial relic. Defenders of the currency argue that the CFA franc is a bulwark of stability and regulates a capricious inflation rate. Despite all these reassuring arguments for the currency, it has never shook-off its colonialism symbol. Some argue that these African countries need and want the CFA franc currency themselves, forgetting that France has a strong geopolitical grip on these nations: funding elections, legitimating despotic leaders, assassinating unfavourable leaders historically, and reproducing a political class that has France’s blessings and backing.

Exploitation and the immigrants flux

The CFA franc is a redundant legal tender that has no means to ameliorate and develop African nations that use it and there societies – it is a colonial shackle. The continued operation of such a colonial monetary system proclaims an inherent predicament in many post-colonial African Nation-states: the perpetuation of a social contract between the former colonizers and the political class. No wonder that Western corporations have virtually absolute monopoly in mineral mining, fishery, agriculture and construction sectors. For instance, France has exclusive rights to export military equipment to CFA franc using nations.

Clearly then, the dystopian world that Luigi Di Maio, Matteo Salvini and there far-right European friends are preaching in Europe actually exists in Africa; where people are condemned to abject poverty and hopelessness. African immigrants are not pleasure-seeking tourists or globetrotters. They are not after Europe’s voluptuous cities or life-style, but after a decent humane livelihood – snatched from them by neo-colonialism tactics, global corporations and an imposed dysfunctional post-colonial nation-states structures. The solution of the immigrant crisis lie in African societies, not in IMF, world banks, UNHRC or NGOs boardrooms. Africa has deep structural issues, and we have been looking at the problem from the wrong perspective.

France and Italy’s war of words

On Monday 21 January, France summoned Italian ambassador Teresa Castaldo over the remarks made by the Italian deputy prime minister, terming his vitriolic comments as ‘‘unacceptable and groundless.’’ The immigrant crisis has unleashed an existential crisis upon the very soul of the EU. Such name-callings will continue contrary to the long hold diplomatic etiquettes – that normally concealed exploitations and even realities. Matteo Salvini, Luigi Di Maio’s coalition partner is in court for abducting 177 African immigrants and vows to do so in the coming months. Italy’s far-right and populist governing parties are hell-bent to make sure African immigrants drown in the Seas instead of reaching Italy, forensic oceanography proved this. Hence, the deputy prime minister’s words should not to be seen as sympathetic or caring for African immigrants.

Furthermore, European parliamentary elections are around the corner – May this year. These statements are uttered to raise anti-immigrant sentiments and tilt the electorate towards far-right political parties. Yet immigrants will continue to flock to Europe as far as neo-colonial tactics operate in Africa. The CFA franc and the way in which Western corporations exploit Africa are at the root of the immigrant crisis. ‘Voluntary colonialism’ (a legitimised neo-colonization of Africa) as Gunter Nooke, Germany’s Africa commissioner suggested, will only compound and augment matters Africa.