How Israel Dominates the Political Landscape in the Middle East

Israel has a more advantageous position than ever regarding issues such as Palestine, the Eastern Mediterranean, confronting the Iranian threat and relations with Gulf countries. 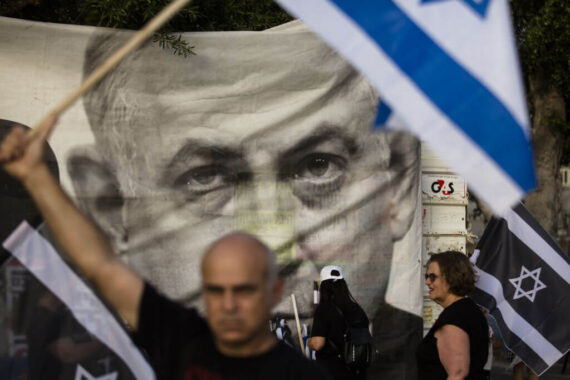 Israelis attend a protest against Netanyahu's 'Immunity Law' on May 25, 2019 in Tel Aviv, Israel. Getty Images

While Middle East politics has experienced one of the most chaotic periods in recent years, Israel stands out as the relatively comfortable actor during this process. This situation is clearly seen in Tel-Aviv’s policies toward various issues in the Middle East. The Israeli administration has managed to benefit from region-wide instability and confrontations between regional powers – Tel-Aviv even encouraged such rivalries. It can be argued that Israel has a more advantageous position than ever regarding issues such as Palestine, the Eastern Mediterranean, confronting the Iranian threat and relations with Gulf countries.

There are a number of reasons behind this situation. First of all, the regional transformation that has been taking place since the start of the Arab revolutions of 2011 has created an uncertain political atmosphere in the region. Israel has considered this uncertainty as an opportunity to expand its sphere of influence. By utilizing various tools, Tel-Aviv achieved to turn the regional political atmosphere to its favour. In an environment where regional actors have been struggling to maintain their national interests and regime security, Israel follows a strategy to increase its influence without any concern that other regional actors have.

Due to regional instability after the Arab revolutions, Israel started to be considered as a stable and strong ally for some Arab leaders, particularly those of the Gulf Kingdoms. While Saudi Arabia, the United Arab Emirates and Bahrain developed strong ties with Israel, Oman hosted Israeli Prime Minister Benyamin Netanyahu. Apart from post-Arab revolutions instability in the Middle East, there are two other motivations for Gulf countries to develop alliances with Israel: the increasing threat perception of Iran and the rising influence of Turkey in the region.

By utilizing various tools, Israel has achieved to turn the uncertainty and regional transformation in the Middle East to its own favor.

The 2013 military coup in Egypt and the emergence of a regime that does not pose a threat to Israel’s security can also be seen as an important factor that opened the way for Tel-Aviv to seek for much bigger ambitions in Middle East politics. For Israel, eliminating the possibility of a threat from Egypt is the most crucial element for Tel-Aviv’s foreign policy making process. Therefore, by securing its relations with Egypt, Israel was able to follow a more aggressive policy towards the region.

In addition to the above-mentioned reasons, the most important dynamic that allowed Israel to expand its influence in the Middle East is the election of Donald Trump to the presidency in the United States. Since Trump’s election in early 2017, Washington’s support for Israel has increased dramatically. The Trump administration fully supported Israel’s occupation policies and ignored many of Tel-Aviv’s steps in this regard. On many occasions, Trump emphasized that his government would defend the interests of Israel at any cost. Trump’s discourse was into put into practice through various policy choices.

In December 2017, Trump announced that the United States recognized Jerusalem as the capital of Israel. While many U.S. presidents brought this issue onto their agenda, none of them made such a decision. Following this announcement by Trump, the U.S. administration moved its embassy in Israel from Tel-Aviv to Jerusalem in May 2018. Finally, in March 2019, during the Israeli operations in Gaza, U.S. President Donald Trump made comments to support Tel-Aviv by saying that Israel was 100% right and could take all necessary measures to protect its citizens.

“Deal of the Century” envisages a solution that prioritizes Israel’s position on Palestine, delivers historic Palestinian territories to Israel and gives Palestinians statehood without sovereignty.

Another example of such support was on the disputed Golan Heights issue. On March 21, 2019, Donald Trump announced that the U.S. recognizes Israel’s sovereignty over the Golan Heights. The Golan Heights, which is regarded as Syrian territory by international law, has been under illegal occupation of Israel for 52 years. With this decision, the United States aimed to support Tel-Aviv’s position on an international level and contribute to the efforts to solve the conflict in favour of Israel.

Finally, with Trump’s rise to power, Israel accelerated its efforts to institutionalize its occupation policies in Palestine. In this context, Trump’s son-in-law and his advisor, Jared Kushner, worked on a plan named as the so-called “Deal of the Century,” to resolve the conflict between Israel and Palestine. The plan, which is expected to be announced in the coming months, envisages a solution that prioritizes Israel’s position on Palestine, delivers historic Palestinian territories to Israel and gives Palestinians statehood without sovereignty. As the discussion continues on the Deal of the Century, Palestinians are determined to stick to their historical lands and claims.

As an indicator of new political alliances, the Deal of the Century is supported by Egypt, Saudi Arabia and the United Arab Emirates. Despite the support of various regimes, the agreement will not receive support from the Arab people. Therefore, the signing of such an agreement and efforts to implement it will create further chaos in an already instable political environment in the region. Whether the agreement will be implemented or not, Israel’s influence in the Middle East will continue to increase given the instability in the region, rivalries among regional powers and the emergence of an alliance between Israel and three major Arab powers, namely Egypt, Saudi Arabia and the United Arab Emirates.