How the PKK Declined Peace Opportunities since Abdallah Ocalan's 2013 Call

The PKK leader calling his terrorist organization twice to leave Turkey or leave armed engagement did not find a response by the KCK and Turkey witnessed thousands of terrorists attacks during the cease-fire period that began in 2013. The HDP's pre-election campaign to disarm the PKK has also not panned out as Demirtş said HDP is not in the position to do so. 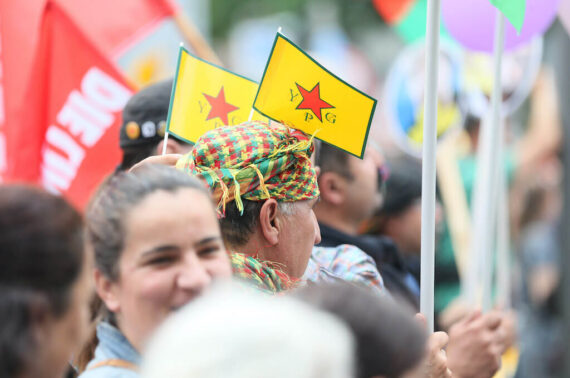 The PKK leader calling his terrorist organization twice to leave Turkey or leave armed engagement did not find a response by the KCK and Turkey witnessed thousands of terrorists attacks during the cease-fire period that began in 2013. The HDP’s pre-election campaign to disarm the PKK has also not panned out as Demirtş said HDP is not in the position to do so.

The cease-fire and PKK’s disarmament process beginning in March 2013 with imprisoned PKK leader Abdullah Öcalan’s announcement has come to a halt several times and even almost ended owing to attacks on infrastructure, armed forces and civilians following calls on the Kurdish community by the Peoples’ Democratic Party (HDP) for street protests. In addition, the contradiction between Öcalan and the PKK leadership in northern Iraq’s Qandil Mountains has been there to be seen, carrying out bloody attacks while Öcalan called for PKK disarmament.

Over the course of the cease-fire and the PKK’s disarmament process, the government remained composed and did not take any military action even though the PKK terrorist organization carried out attacks resulting in dozens of deaths.

Having been determined to bring the three-decade unrest in the country to an end, the government has taken many steps toward improving relations through reforms. The reward for the efforts, however, has so far been contradicting remarks by the political wing of the process as well as the PKK leadership, justifying bloody attacks and threatening the government from time to time.The chronology of statements from Öcalan and top PKK leaders in the Qandil Mountains explicitly show contradictions on the organization disarming with inconsistent statements at once disclaims the declaration and encouraging an armed fight against the Turkish state.

The period starting from July 11 with the unilateral declaration of the end of cease-fire by the PKK terrorist organization has witnessed the killing of more than 40 security forces personnel. The state has exercised its right to defense and Prime Minister Ahmet Davutoğlu has said it will resolutely fight until the terror across the country has ended.

Davutoğlu and President Recep Tayyip Erdoğan have repeatedly indicated that Ankara has always been and continues to be in favor of carrying out the reconciliation process with the Kurdish people. For this, however, all armed factions need to leave the country for good and support along with justification for terrorist attacks needs to end.

“A door has been opened from armed struggle to democratic struggle… We have come to a point today where guns will be silenced and thoughts and ideas shall speak. Now it is time for our armed elements to move outside [Turkey’s] borders… This is not giving up the struggle, but the launching of a different struggle…”

The PKK officially announced that it would withdraw all its armed forces to northern Iraq. Speaking at a press meeting held in Qandil, which was relayed on TV channels, Murat Karayılan announced that the PKK would recess without precondition from May 8.

Selahattin Demirtaş’s announcement on the pullout: “The pullout will officially start tomorrow. We are estimating that it will last three or four months.”

Some protests were kicked off in Diyarbakır province’s Lice district on the pretext of road works and outpost constructions. One protester died.

Cemil Bayık was assigned to chair the Kurdish Communities Union (KCK). The announcement issued by the KCK read, “The nine-month period without any clashes has been spent conducting some military works that cannot be performed in a state of war…”

The government introduced the Democratization Package. In reply to that, the PKK organized the Patriotic Revolutionist Youth Movement (YDG-H), which acted as the PKK’s urban youth armed group. It also founded courts in cities, collected taxes and abducted people.

The KCK announced that the government was “no longer the addressee of the democratization move.”

The letter penned by Öcalan for the Nevruz celebrations: The letter was recited both in Kurdish and Turkish in Diyarbakır, by the Peace and Democracy Party (BDP) Deputy Chair Pervin Buldan and the Peoples’ Democratic Party (HDP) Istanbul Deputy Sırrı Süreyya Önder respectively. Öcalan wrote, “History showed us that if we don’t lead for peace with strong will, historical problems will go their own way and most probably will produce their own answers with very big losses. There is a burning question awaiting an answer: Will we continue with replicated coups or will we prefer absolute and radical democracy?”

A delegation from the HDP met the imprisoned Öcalan on İmralı Island. In the statement issued after the meeting, it was stated that Öcalan remarked, “the most important reality is the fact that the process has come to a new phase,” adding that hopes should be kept alive to make a serious start for the resolution.

In the province of Bitlis, terrorists blocking a road opened fire on security forces with rocket launchers and long-barreled weapons. A bomb attack took place in the district of Lice.

A national flag in the garden of Diyarbakır’s Second Air Force Command was taken down by a terrorist.

The “Draft Law to End Terror and Strengthen Social Integration,” which regulates the procedures and principles of the reconciliation process, passed into law after being approved at the Parliamentary Counsel.

A statue of PKK member Mahsuni Korkmaz was erected in Lice. The court issued a decision to demolish the statue. Clashes broke out, one was killed.

In Diyarbakır, a group of terrorists organized an attack on an outpost.

The HDP issued a call to boycott schools on the pretext of education in their mother tongue. Dozens of schools were set ablaze in many provinces.

Demirtaş’s Kobani call: After the call issued by Demirtaş, the Kobani incidents broke out. More than 50 people died. Clashes erupted in over 35 cities. Damage costing millions of Turkish lira was done. Öcalan said, “The reconciliation process will end if Kobani falls.”

Some PKK militants were identified in Tunceli while leaking into a launch base area. A clash took place.

During the HDP’s İmralı visit, Öcalan announced that a new phase started on Oct. 15 and tangible steps would be taken.

The HDP called on people to take to the streets again.

Oct. 30, 2014: In Diyarbakır, Necdet Aydoğdu, 24, a military officer, was killed by two masked assailants while he was off-duty, shopping with his wife downtown.

Speaking to Fırat News Agency, Sabri Ok, a senior KCK member, remarked that there were no developments in their agenda regarding disarmament.

Major clashes broke out in Cizre. The bodies of four People’s Protection Units (YPG) members, who were killed in the clashes in Syria’s Kobani and Iraq’s Shingal regions, were transferred from Habur to Cizre. A confrontation between the YDG-H members, who were on duty at the tent for condolences in Nur, and some proponents of the Free Cause Party (HÜDA-PAR), turned into an armed conflict.

A HDP delegation negotiated with Qandil. It was stated that the KCK thought the Justice and Development Party (AK Party) did not display the responsible approach required for the negotiation process.

Meeting the KCK administration in Qandil, the HDP delegation announced in a written statement that the KCK was disturbed by the Domestic Security Package and this would undermine the negotiation process.

Öcalan called on the PKK to lay down its arms.

Öcalan called to hold a congress to leave the armed fight: He called for the PKK to gather a congress with the aim of ending the armed conflict against Turkey in the Nevruz celebrations held in Diyarbakır on the condition of founding a truth and reconciliation commission comprising of deputies and a monitoring board.

Bese Hozat said, “Convening the congress is not on our agenda at the moment because the process has not worked and no step has been taken. Let alone negotiations, the dialogue process was removed. Negotiations have not been held with our leadership for a month, the delegation did not pay a visit to our leadership.”

The HDP imposed pressure on ballots in the eastern regions. Block votes were cast in hundreds of ballot boxes in villages.

After Demirtaş’s call that the PKK could lay down its arms with Öcalan’s call, the KCK announced, “We own the will of disarmament. Demirtaş or Öcalan cannot urge us to lay down our arms.”

The KCK: “We must clearly emphasize that the PKK’s will to end the armed fight against Turkey belongs completely to us. Everyone should know that the HDP is not the official party of the PKK. Consequently, the HDP does not have a right to issue such a call. Besides, it is not possible for Öcalan to issue a call in his present conditions in İmralı. Expecting the HDP and Öcalan to call for disarmament and putting pressure on that frame means the insistence on insolubility and it is not possible for our movement to recognize that. This attitude aims at neither listening to Öcalan nor blocking the HDP’s policy-making.”

Karayılan: “Let me put this clearly. If they intervene in Rojava, we will also intervene in them. Then the whole of Turkey will turn into a battlefield. The Turkish authorities should not forget the uprising of our people on Oct. 6, Oct. 7 and Oct. 8. It is well known that Öcalan, who did not approve of the great uprising of our people, was barely able to stop it. It is obvious that the people would not allow such an intervention. In brief, such a decision would be a strategic one for Turkey, and a new period would start for the Kurdish people. We will not beg to anyone on that matter. They can do whatever they want. If they attempt it, of course, we would reply to that as Kurdish people.”

KCK’s announcement on ending the cease-fire: “The cease-fire is over. The meticulous attitude of our liberation movement was exploited. The dams and vehicles used for dam constructions will be targeted by our guerilla forces. Every detainment from now on will be a reason for the reprisal of our guerillas. Our liberation movement will not accept the exploitation of the cease-fire conditions, and stands against the policies that leave the Kurdish question unresolved.”

The PKK opened fire on a minibus.

ISIS attack in Suruç: An explosion took place in Kobani simultaneously with an explosion in Suruç. Thirty-two people were killed in the Suruç explosion.

KCK Co-Chair Cemil Bayık called on people to take up arms, dig trenches and create tunnels in their homes.

In Adana, Kalem-Der member Ethem Türkben was killed by the PKK in front of his pregnant wife and three children.

In Diyarbakır, a police squad heading to a traffic accident scene was ambushed. Polis officer Tansu Aydın was killed and one officer was injured.