During times where people are beginning to question the end of the EU, the “European Defense Union” initiative, led by France and Germany, is a mere attempt to create excitement and to take an effective step against their opponents. Considering the fact that similar steps have failed in this regard, there remains the question as to whether the EU can be successful in this attempt - which it launched during its weakest times. 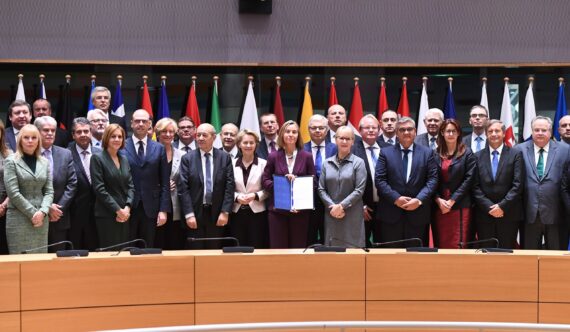 EU Foreign Policy Chief Federica Mogherini (C) pose with some foreign and defence ministers from 23 EU member states after they signed the notification on Permanent Structure Cooperation (PESCO) on the margin of a foreign affairs council at the European Council in Brussels on November 13, 2017. AFP

On Monday the foreign and security ministers of 23 European Union member states signed an agreement in Brussels, which was regarded as the first step for the creation of a European Defense Union. The agreement, which includes increasing the defense budget, forming military cooperation projects, and readying a cooperative military power in order to respond to a crisis, seems to have caused different reactions among the EU.

This turn of event was not a surprise for some, as following many unsuccessful meetings with US President Donald Trump, German Chancellor Merkel called on newly elected French President Macron to increase military cooperation in order for Europe to “take its fate into its own hands.”

However, one has to ask whether the request of Germany and France is enough to form a “defense union” in the EU.

Considering previous initiatives that were taken and which failed in this regard, it seems difficult for the EU to form a defense union that is independent from NATO.

Just a year after the establishment of the European Coal and Steel Community, which was established in 1951, the European Defense Community Treaty, pioneered by France to “keep Germany under control and keep the United States out” failed to pass the country’s own parliament. Thus, Western European countries, including France, where the government failed to convince its own parliament to establish a European defense system, remained under the framework of US-dominated NATO during the Cold War era.

After the Cold War, a group of member states led by France tried once again to form an independent defense union under the EU. However, this time they were obstructed by the European-Atlantic Group led by the UK. Following the lack of military assistance from the US, the EU’s military weaknesses came to the fore during the Yugoslav Civil War, when member states wanted to intervene in Serbia in order to prevent a refugee crisis. Even under these circumstances, the union failed to converge a unified defense.

During the St. Malo Summit in 1998, the UK took a positive stance to a European military that would not become an alternative to NATO. Hence during the Cologne and Helsinki Councils in 1999 it was decided that a “European military” and “European police force” would be formed that would be effective until 2003. During this time, transferring Western Europe’s military organizations to the EU during the Laeken Summit in 2001 was an important step for the formation of a defense union in Europe. The attempt to consolidate a “European Union Constitution,” which was also initiated during this time, not only constituted the political ground for steps in a joint defense union, but was also a step towards the ultimate dream of a federal union. This meant that the “Europeans” were a step closer to the federal union that they were dreaming of.

However, immediately after these initiatives, Europe had begun to experience subsequent disasters and crises in regards to its integration. There were two major instances that disrupted the European integration process. The first occurred during the 2003 Iraq War, where member states were divided on the issue of supporting the US. This ultimately shelved the idea of a common defense union. The second instance occurred in 2005, where during the referendums held in the Netherlands and France, the public voted against the establishment of a European constitution. This was a great blow to the idea of a federal union.

With further crises including the economic crisis of 2008-2009, which then transformed into the Euro Crisis, the refugee crisis, the increase in hate crimes and anti-EU sentiments, the rise of separatist movements, Brexit, deterioration of transatlantic relations following the election of Trump as the US president, and the increase in terror attacks deemed this decade as the “Crises Period” for the EU.

Thus, during times where people are beginning to question the end of the EU, the “European Defense Union” initiative, led by France and Germany, is a mere attempt to create excitement and to take an effective step against their opponents. Considering the fact that similar steps have failed in this regard, there remains the question as to whether the EU can be successful in this attempt – which it launched during its weakest times.