How Sanctions Prevented Iran from Becoming a Regional Power

With its great potential in natural resources such as oil and gas, Iran would have been a regional power if the country had not faced international sanctions for many years. Therefore, it can be argued that the main reason for the U.S.’s insistence on the sanctions imposed on Iran was to keep Tehran at a limited capacity in regional and global politics. 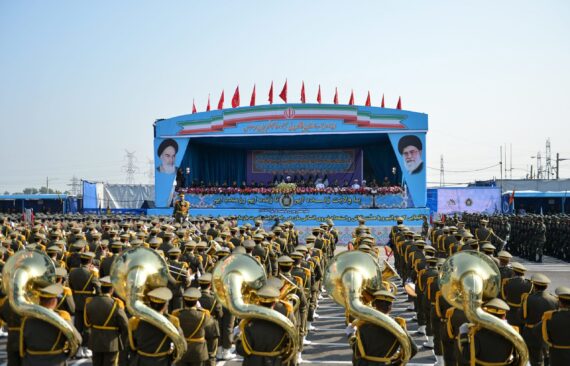 Military parade held to mark the National Army Day in front of the Mausoleum of Ayatollah Khomeini in Tehran, Iran on April 18, 2018. Anadolu Agency

The United States President Donald Trump recently announced that Washington has withdrawn from the nuclear deal that was signed between Iran and the international community. The announcement did not cause a serious reaction in Tehran. The main reason behind this unresponsive attitude is the fact that Iranian decision makers have been well experienced to the similar political decisions of the United States. This decision has also allowed Iranian political elites to instrumentalize their strategy of “U.S. antagonism” on which Tehran has based its policies towards the U.S. The U.S.’s decision also led Iranian people, who had to endure U.S. sanctions for years, to grow a deep sense of insecurity towards Washington.

Civil and political actors in Iran have accepted the fact that they have to accustom themselves to the international sanctions against their country, which have been applied since 1979. Because of these sanctions, Iran has limited integration to the international economic system. As a result, sanctions have been accepted as part of daily life and politics in Iran. For this reason, Iranians who have endured U.S. sanctions for many years do not have much concern about the new sanctions that can be applied in the near future.

This is the impression I have observed during my one-week long visit to Iran last week. Throughout the years, Iranians have obviously adapted themselves to life with international sanctions. This is observed from the fact that despite heavy sanctions for years, Iran has a vibrant economic, cultural and social life. The country is perceived as an outsider to the global system, but in reality, it perfectly functions without international connectivity. From municipal services to infrastructure, from cultural life to economic activities, Iran is drawing a more successful picture than most countries in its neighborhood. The vibrant economic life, human mobility and the presence of a dynamic population in all big cities of the country, ensure that Iran is self-reliant despite the years-long sanctions.

On the other hand, it should not be forgotten that Iran is far below its capacity due to the sanctions imposed by the United States and the international community. With its great potential in natural resources such as oil and gas, Iran would have been a regional power if the country had not faced international sanctions for many years. Therefore, it can be argued that the main reason for the U.S.’s insistence on the sanctions imposed on Iran was to keep Tehran at a limited capacity in regional and global politics.

A crucial question here is how Iran’s integration to the international system would transform the country and regional politics. It is obvious that if Iran achieves to integrate itself into the international community, the country would become the key actor in regional politics. Iran’s exclusion from sanctions and achievement of economic growth would allow Tehran to increase its influence in its neighborhood. Despite the sanctions, Iran has followed a strategy of regional expansionism successfully. Without sanctions, Tehran would follow a more aggressive strategy of regional expansionism. In such a scenario, countries like Turkey, Egypt, Israel and Saudi Arabia would feel the pressure that may be caused from Iran’s expansionist policies. On the other hand, Iran’s increasing economic and military capacities would become a source of concern for regional actors such as Turkey, Saudi Arabia and Israel. Therefore, it’s of great importance for these countries that Iran is kept at a limited level both economically and militarily.

On the other hand, international actors such as the U.S. and Russia object to Iran’s transformation into a regional power. Together with other major Western players, these countries have contributed to keep Tehran’s capacities at a limited level. The main aim of these actors was to prevent Iran from becoming a stronger actor that can influence the policies of the global powers towards the Middle East. These global actors have also taken into consideration the interests of their regional allies such as Egypt, Israel, Saudi Arabia and the United Arab Emirates. Due to the demands from these countries, the U.S. has continued its sanctions on Iran.

It can be said that the sanctions imposed on Iran by Western countries have aimed to prevent Tehran from becoming a more powerful regional player. In addition to that, these sanctions protected both the interests of the West and their allies in the region. They also functioned as an instrument for the U.S. to secure the loyalty of its regional allies. Finally, it can be stated that despite the sanctions, Iran will continue to be one of the most important countries of the Middle East with its dynamic and vibrant population as well as significant energy resources.